In this blog, I share some images from an application called Storm.  I wrote the program many years ago.  Storm has the ability to generate 3-dimensional plumes from a stream of data.  It also has an unusual feature that allows the user to trade based on the kinetics - effectively eliminating the need to know about pricing.  At this time, I would like to draw a clear distinction between trading and investing.  I should also point out that I used Storm for recreational purposes so I could - in a literal sense - "play" the market usually during interesting times in history such as WWII, Vietnam, and the Tech Bubble.  When I was developing the program, it occurred to me that probably some gifted individuals - maybe even children - could trade by kinetics much better than me.  I also used Storm to examine precipitation and hurricane data, electrocardiogram signals, earthquake data, and other lengthy streams of data that conventional software seemed poorly designed to present graphically.  However, the main purpose of this blog is to share details about the plume structure, which might assist in the visualization of dynamic data more generally.

I present three types of plumes below:  Paranoid, Reluctant, and Reactionary.  Each plume is presented in three different formats:  surface image (left); depth image (middle); and transitional (right).  In a transitional image, the surface data is algorithmically squeezed into fixed boundaries.  I generally used the transitional image for simulated trading purposes.  My basic rationale behind these plumes for trading purposes is as follows:  repetitive change indicates trend.  However, incidents of repetitiveness tend to be distributed in an evasive manner.  Repetitiveness should also not be confused with repetition particularly as it relates to stocks.  The reductive nature of the index - the pricing - tells us almost nothing about the underlying investment or the activities of stakeholders:  this makes it unclear whether at any given time pricing represents fair or flawed valuation.  I found the usefulness of kinetic representation in how it allows for sense of tempo and rhythm.

A Paranoid differential plume is jumpy.  A person could logically expect it to be jumpy because the plume structure is based on the following differential pattern:  (1)-(2) (1)-(3) (1)-(4) (1)-(5) (1)-(6) (1)-(7) and so forth from left to right across the surface - the differential forming the depth of the plume.  I found it difficult to fit a Paranoid into fixed boundaries.  It routinely hits a boundary and keeps banging against it.  The surface appears muddy or blurry.  I have tried playing the transitional image, but it is fairly fast-paced and stressful. 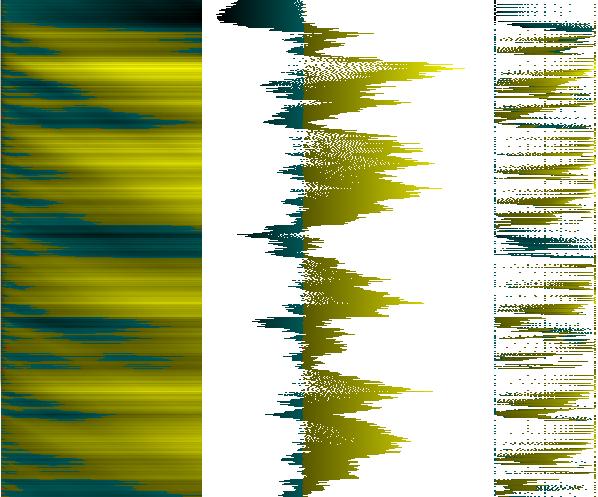 In a Reluctant differential plume, it is assumed that the underlying numbers have certain convective qualities - that pricing flows gradually.  In order to capture this phenomenon, the following differential pattern is used:  (1)-(2) (2)-(3) (3)-(4) (4)-(5) (5)-(6) (6)-(7) and so force across the surface.  The surface appears icy.  The kinetics will tend to be contained in a tight centre - pulling to the boundaries only under exceptional circumstances.  The transitional image is easier for people like me to play - that is to say, mature people that to enjoy the scenery.  However, a lot of potential gains can be lost by the time a boundary is reached.  (The push is at the Paranoid.) 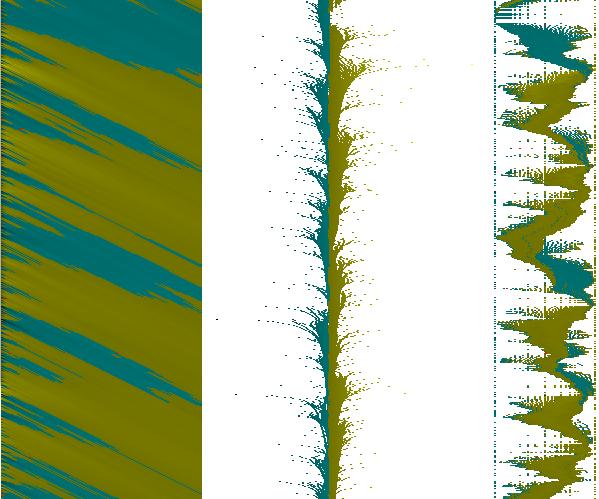 In order to fit the differential plume into fixed boundaries, I exploited the cyclical patterns on the surface images - indicating movement from one extreme to another - e.g. from all turquoise to all gold.  I eliminated the amplitudes and kept the polarities such that all turquoise on the surface differential created one boundary (-1 to the left) and all gold the other boundary (+1 to the right).  (The colour scheme for the transitional is different.)  Due to limited computer processing capabilities at the time, I could not flip between different types of plumes from this aerial perspective.  I usually played the head or face of the transitional image as shown below.  I often combined all three of transitional wave patterns.  The face is the front of the transitional image - the left being the lightest part of the plume and the right being its heaviest - the top conceptually representing overvaluation and bottom undervaluation.  So the objective of the game is to catch the wave at the bottom and sell at the top.  In Paranoid play, the wave might reach the bottom, bounce around, and then dive.  So I quickly discovered that tempo was an important issue - and no particular stock necessarily gave a good sense of it. 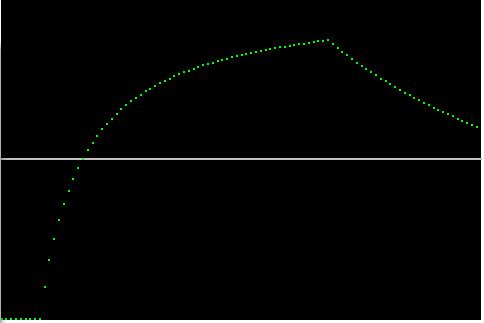 Through this approach I found it possible to do simulated trading without knowing the price.  Moreover, the visualization provided a great deal more information than the price on its own.  I also found the games fairly entertaining.  I wondered if it were possible to maybe to test for different aspects of cognitive problems using Storm.  I imagined some brilliant young person perhaps with a musical or dance background being able to anticipate hurricanes and earthquakes.