I made a recent discovery that I would like to share with the community. In my previous blog, I introduced a special algorithmic shell that distributes stocks based on their price movements (along the x-axis) and volume movements (y-axis). Using this shell, it is possible to visualize the trading behaviours of dozens of stocks simultaneously. I noticed one day that the stocks seemed to be lining up in formation. I decided to test the accuracy of my visual interpretation. Below I present the shell containing two reference lines: the "value line" and the "liquidity line." I adjusted my coding to measure the correlation between the shell distribution and the line. The correlation is positive when the distribution is aligned with value, negative in the case of liquidity. I found that the distribution can migrate between value and liquidity. Given the coding behind the algorithms, I surmised that there might be something deep and unstudied influencing the shell distributions. In this blog, I will be elaborating on this rather orderly behaviour of stocks, which I have named the Value-Liquidity Cycle. 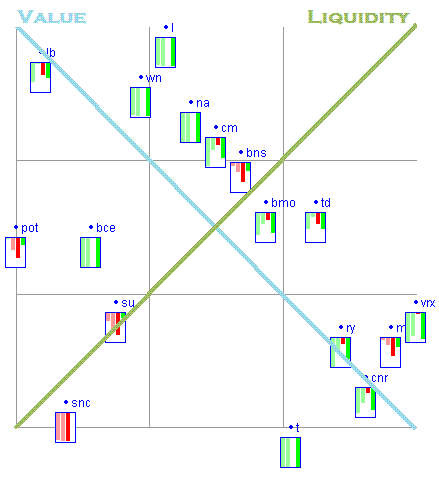 I'm uncertain if fellow bloggers and blog followers have ever noticed, but I find the task of creating proper names difficult. I need terms to make blogging possible even when I have an incomplete understanding of phenomena, and the terms chosen aren't ideal. The mere act of applying a term to observable behaviour exposes me to criticism on my choice of terms; this can detract and distract from the points I am trying to make. There is also the issue of audience acceptance: a term that is reasonable for academics might be less so among those in the industry. In any event, I want to suggest that if price motion increases along with volume motion (in a manner of speaking, if price increases with volume), it is reasonable to suggest that investors value liquidity: this is the rationale behind the liquidity line. The more volume, the more value attached. If volume motion declines as price motion increases, it seems that investors no longer regard liquidity as an aspect of value: this is the principle behind the value line. The less volume, the more value attached. Whether or not my conceptualization is accurate probably requires considerable research. I admit that I have not conducted it; but for the purpose of furthering discussion in this blog, I will be making use of the terms as outlined.

Another weakness in my terminology, there being three words in the title, is cycle. A cycle is definitely an assertion since it suggests regular and coherent movement - rather than sporadic and random - to and from particular set points. I just haven't reviewed enough data to confirm whether the cycle consistently occurs in all sorts situations. Faced with the choice of posting this blog many years later or sharing some preliminary findings now, I clearly chose the latter but with explanation. In fact, I am uncertain about my willingness to carry out more elaborate and systematic research: the amount of discipline necessary would likely reduce my spontaneity.

I first want to substantiate my earlier assertion that in fact stocks on the algorithmic shell are in motion. In order to establish this, I prepared a movie clip showing the movement of stocks on the shell during a relatively minor correction. I left out the dates on the image below deliberately in order to discourage speculation. I emphasize that the Value-Liquidity Cycle, although formed using price movement, appears to have no stable correlation to price based on data studied so far. I have observed some association between the cycle and certain extreme market conditions. It is not my intention at this time to discuss price correlation specifically because it is a complicated issue. I call the clip the "Dance of Dread" since long investors are losing money. The shell correlation approaches zero during the correction. I am not suggesting that market downturns and low correlations are necessarily connected. In fact, it is possible for the market to pass zero without any apparent impact to price. I call the zero mark the neutral plane. When full migration occurs over the plane, I describe this as a crossover.

Although I would like to offer readers a clip containing many more frames, I had to limit the number in order to keep the size of the file reasonable. The change in correlation is apparent even in this short sample. On the first frame on the clip, the shell correlation to the value line is 0.3886; on the last, it is -0.0099. In this cycle, I have found that the movement to negative is uncommon. It is peculiar for the liquidity pattern to exist for long. On the other hand, it seems normal for the value pattern to persist. Since these findings might be due to limited research, I caution against making too much of them. 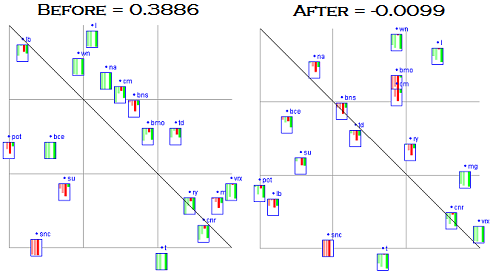 In order to prove to readers that the distribution is the result of migration rather than chance, below I present just the shell correlation over a much longer time period. The image shows that the shell can change gradually. I included the trading pattern for one of Canada's largest companies. Despite a prolonged period of price increases for the stock, the correlation continued to fluctuate in a manner indicative of a cycle; but it offered little guidance in terms of future price for the stock. In a year containing much more negative correlation - that is to say, exhibiting more liquidity - the price of the stock merely continued to increase. However, I need to emphasize that the shell presents the dynamics between rather than for individual stocks. It seems inappropriate to treat the correlation as insight to the future prospects for any individual stock. Due to the apparent lack of association, perhaps data scientist more so than professional traders would find the presence of coherent cycles in the background interesting. (I left out an important detail. In this sample, the correlation and the price are correlated at almost 0.69. As I mentioned earlier, correlation to price is a complicated issue. My main objective in this blog is to point out these curious cycles.) 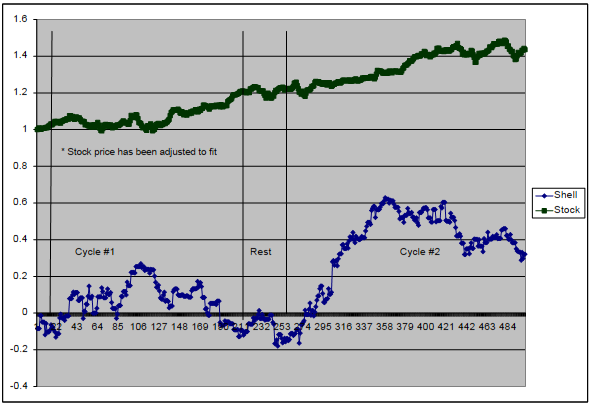 Having shared details of the market behaviour made detectable through my algorithmic shell, I also want to give readers a bit of perspective. I want to explain my relationship to the markets. I am certainly not a professional in finance, portfolio manager, or even an avid investor. I have a degree in environmental studies. I never concentrated on natural habitats during my studies - being more focused on social environments. An important topic covered in relation to nature is the practice of clear-cutting. This is when the trees occupying large areas of land are cut all at the same time resulting in horrific scenes of desolation. Apart from the impact on trees, there are lasting consequences to wildlife. Humanity is also affected since forests function as our lungs. Forests also retain large amounts of moisture. As an alternative to clear-cutting, some environmental groups have suggested selective harvesting; this is a more expensive and complicated approach even if it is feasible. Still, I consider the idea of being selective in order to mitigate the impacts of consumption an important concept in light of mass consumerism.

As investors, similar to our behaviours as consumers, I think many of us remain at a gorging phase much like caterpillars preparing for metamorphosis: we would like to extract as much money as possible from the markets without ever having to consider how this is a market of human lives. What we take out, we take away from people. The methods of engagement at our disposal reify and alienate others, contributing to an atmosphere of exploitation. When capital is scarce and lives are in the balance, it is necessary to elevate the discussion. I don't look at technical analysis as a means of furthering this philosophy of resource extraction; instead, it can help us responsibly sustain our capitalist system for the benefit of those in society that wish to be a part of it. I ask myself, who am I to question everyone else. I still live in this semi-dream-like state, thinking that I can ride my bike in a rainy day and worry about getting wet rather than not being able to retire. It is the sort of dream that I think all of us deserve to have. We should be able to afford to worry about small things because other people are looking after the really big concerns.

This brings me to my belief that big data - although we might think about it in relation to big business presumably because they have so much data - is actually part of the everyday lives of people. Everyday, people are exploited. We live in a world of victims and oppressors. However, this is a world that cannot last. There really has to be more research into areas of ethical and responsible engagement. Usually, this argument might be interpreted in a purely polemic or political sense. I suggest however that there are algorithmic dimensions towards the path to ethics and sustainability.

Highway congestion would be terrible if everybody decided to take the same roads and highways at the same time. The resulting bubbles and crashes from investors jumping in and out of the markets serve no useful purpose but to turn people away and deprive them of their dreams. People need to be motivated and confident to remain engaged with society. Since the primary purpose of the markets is to raise capital to achieve worthwhile ends - to provide services and products that people need - having alienated investors is also bad for corporate finance. We have to deliberately enable the possible. I think that the future requires levels of responsible engagement that only certain types of algorithms can provide. The stock market is important to study for the purpose of promoting social engagement and stability.