Tutorial: How to detect spurious correlations, and how to find the real ones

Specifically designed in the context of big data in our research lab, the new and simple strong correlation synthetic metric proposed in this article should be used, whenever you want to check if there is a real association between two variables, especially in large-scale automated data science or machine learning projects. Use this new metric now, to avoid being accused of reckless data science and even being sued for wrongful analytic practice.

In short, even nowadays, what makes two variables X and Y seem related in most scientific articles and pretty much all articles written by journalists, is based on ordinary (weak) regression. But there are plenty of other metrics that you can use to compare two variables. Including bumpiness in the mix (together with weak regression in just one single blended metric called strong correlation to boost accuracy) guarantees that high strong correlation means that the two variables are really associated, not just based on flawy, old-fashioned weak correlations, but also associated based on sharing similar internal auto-dependencies and structure. To put it differently, two variables can be highly weakly correlated yet have very different bumpiness coefficients, as shown in my original article - meaning that there might be no causal relationship (or see my book pages 165-168) or hidden factors explaining the link. An artificial example is provided below in figure 3.

Using strong, rather than weak correlation, eliminates the majority of these spurious correlations, as we shall see in the examples below. This strong correlation metric is designed to be integrated in automated data science algorithms.

Note that c1(X), and c1(Y) are the bumpiness coefficients (or see my book pages 125-128) for X and Y. Also, d(X, Y) and thus r(X, Y) are between 0 and 1, with 1 meaning strong similarity between X and Y, and 0 meaning either dissimilar lag-1 auto-correlations for X and Y, or lack of old-fashioned correlation.

The strong correlation between X and Y is, by definition, r(X, Y). This is an approximation to having both spectra identical, a solution mentioned in my article The curse of Big Data (see also my book pages 41-45).

This definition of strong correlation was initially suggested in one of our weekly challenges.

When a = 0, weak and strong correlations are identical. Note that the strong correlation r(X, Y) still shares the same properties as the weak correlation c(X, Y): it is symmetric and invariant under linear transformations (such as re-scaling) of variables X or Y, regardless of a.

In figures 1 and 2, we simulated a large number of uniformly and independently distributed random variables Y (> 10,000) each with n observations, and computed the correlation with an arbitrary variable X with pre-specified values. So in theory, you would expect all the correlations to be close to zero. The following scatterplots (figures 1 and 2) disprove this fact. 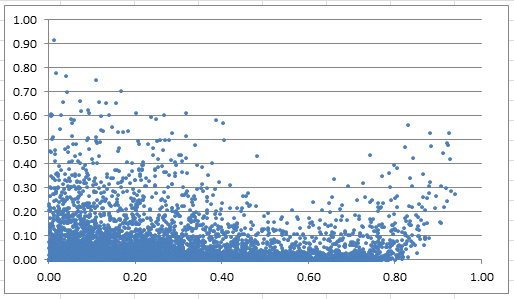 Figure 1: weak (x axis) and d-correlations (y axis) computed on thousands of (simulated) paired variables with n = 9 observations, that are, by design, non-correlated. Each dot represents a correlation. 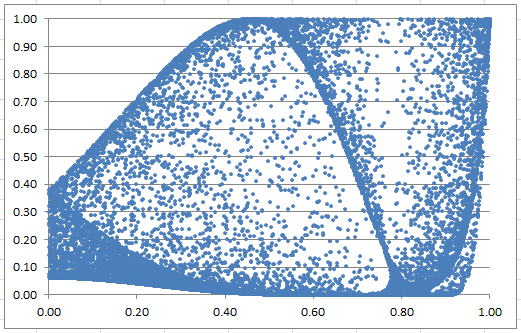 Figure 2: weak (x axis) and d-correlations (y axis) computed on thousands of (simulated) paired variables with n = 4 observations, that are, by design, non-correlated. Each dot represents a correlation.

3. Excel spreadsheet with computations and examples

The spreadsheet shows simulation of a variable X with n observations, stored in first row, with thousands of simulated Y's in the subsequent rows. There are two tabs: one for n = 4, and one for n = 9. For instance, in the n = 9 tab, column J represents the weak correlation c(X, Y), column M represents c1(Y), and column N represents the strong correlation r(X, Y). The parameter a is stored in cell P1, and summary stats are found in cells Q1:T12. The spreasheet is a bit unusual in the sense that rows represent variables, and columns represent observations.

The Excel spreadsheet has some intrisic value besides explaining my methodology: you will learn about Excel techniques and formulas such as percentiles, random numbers and indirect countif formulas to build cumulative distributions. For better random generators, read this document or my book pages 161-163.

Confidence intervals for these correlations are easy to obtain, by running 10 times these simulations and see what min and max you get. For details, read this article or my book pages 158-161.

4. When to use strong versus weak correlation?

The strong correlation is useful in contexts where you are comparing (or correlating or clustering) tons of data bins, for instance for transaction scoring, using a limited number n of features (n corresponding to the one used in this article). This is the case with granular hidden decision trees (see also my book pages 153-158 and 224-228).

It is also useful when comparing millions of small, local time series, for instance in the context of HFT (High Frequency Trading), when you try to find cross-correlations with time lags among thousands of stocks.

Note that a = 4 (as used in my spreadsheet) is too high in most situations, and I recommend a = 1, which has the following advantages:

It is possible to integrate auto-correlations of lag 1, 2, and up to n-2, but we then risk to over-fit, except if we put decaying weights on the various lags. This approach has certainly been investigated by other scientists (can you provide references?) as it amounts to do a spectral analysis of time series as mentioned in my article The Curse of Big Data (or see my book pages 41-45), compare spectra, likely using Fourier transforms.

Finally there are many other metrics available to measure other forms of correlations (for instance on unusual domains), see for instance my article on Structuredness coefficient or my book page 141.

For those participating in our data science apprenticeship (DSA), we have added strong correlation as one of the projects that you can work on: specifically, answer questions from section 5 and 6 from this article (see project #1 under "data science research", in the DSA project list).

I haven't done research in that direction yet. I have a few questions:

7. About synthetic metrics and our research lab

The strong correlation is a synthetic metric, and belongs to the family of synthetic metrics that we created over the last few years. Synthetic metrics are designed to efficiently solve a problem, rather than being crafted for their beauty, elegancy and mathematical properties: they are directly derived from data experiments (bottom-up approach) rather than the other way around (top-down: from theory to application) as in traditional science. Other synthetitic metrics include:

This article builds on previous data science (robust correlations, bumpiness coefficient) to design a one-parameter, synthetic metric, that can be used to dramatically reduce - by well over 50% - the number of spurrious correlations. It is part of a family of robust, almost parameter-free metrics and methods developed in our research lab, to be integrated in black-box data science software or automated data science, and used by engineers or managers who are not experts in data science.

Ups! Sorry but I missed one more question: would you recommend strong correlations if we're not dealing with big-data (but instead small complex data -few rows, many variables- such as classical animal behaviour experimentation in life sciences)?

Really interesting article, Vincent. Thank you very much for sharing.

What about the exploratory stage of an experiment? Do you still suggest using strong correlation indexes even when they may lead to lose relevant relationships to confirm later?

To simplify, would you recommend strong correlation only when weak has found a "significant" relationship?  ("significant" defined however user sees fit)

Or do you recommend strong as a replacement of weak correlation?

Interesting, Vincent. How to choose the value of a? Always keep it equal to one?

Did you compare your strong correlation with the rank correlation? What are differences between them?

Did you apply your strong correlation to pathological cases like those from http://www.tylervigen.com/?utm_content=buffer7a862&utm_medium=s...