We also decided to then analyze Stack Overflow data to understand most discussed packages and analyze the one with the most questions & unanswered questions. 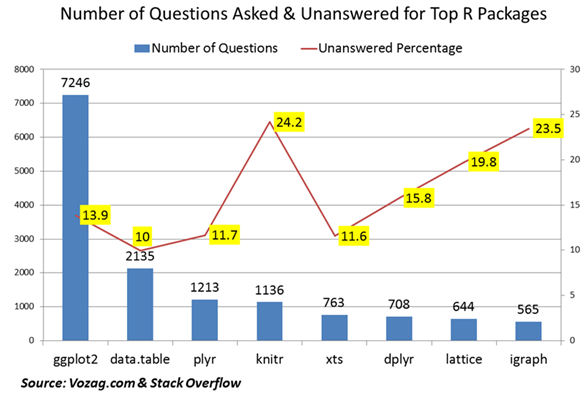 GGPlot was ranked first with the most questions at ~7200 questions followed by Data table (2135), Plyr (1213) & Knitr (1136). Other packages had less than 1000 questions each. We also looked at the unanswered questions. The packages with the highest percentage of unanswered packages were Knitr, Lattice and iGraph at 24.2%, 23.5% and 19.8% respectively.

So- does the R community need to focus on packages that have the highest questions to resolve their issues rather than the ones with the most downloads?

Part of the reason could be that the Data.Table and Knitr packages are used in some popular MOOCs (I know that they are both used in the Coursera Data Science MOOC, for instance) and that this results in a disproportionately high number of questions related to these packages from relative beginners in R.