There is Something New Under the Sun: Uplift Modeling

Summary:  Just when you thought there was nothing new under the sun in response modeling, surprise, along comes Uplift Modeling.

Tools and approaches to response modeling are so fully explored and understood there’s nothing new left to be learned, right?  Get the best lift curve with the best Gini coefficient and run with it.

Actually, for a long time we’ve had that niggling little bit of doubt about who would have bought anyway even without our special offer.  Or worse, in churn prevention, did our campaign actually awaken a discontented customer and cause them to reevaluate their relationship with us.  Both of these concerns are no doubt true.  For some customers no promotion was necessary to get them to buy, and yes we undoubtedly poked some sleeping bears who rose from their slumber and used this reminder to run off with our competition.

There is a technique that corrects for this and offers much improved campaign ROIs.  It’s called Uplift Modeling.

Actually it’s not quite new.  The topic has been making the rounds of the conferences for eight or more years and it’s fairly easy to find academic studies older than that.  To add more confusion, Uplift Modeling is also known by a variety of names including: differential response analysis, incremental modeling, incremental impact modeling, true response modeling, true lift modeling, proportional hazards modeling, and net modeling.

What’s mostly new is that Gartner has flagged Uplift Modeling as worthy of the 2015 Hype Cycle for Advanced Analytics and Data Science.  And while it’s still “emerging”, it’s on the up-slope. Another way of saying this is:

At a very simple level, Uplift works by subtracting one group from the other to remove those who would have acted anyway.

In response modeling, the Uplift concept focuses on the quadrant labeled ‘persuadables’.  Both traditional techniques will help to eliminate the ‘do not disturbs’ and the ‘lost causes’, but Uplift saves us from reducing revenue and margin by excluding the ‘sure things’, those who would have bought anyway. 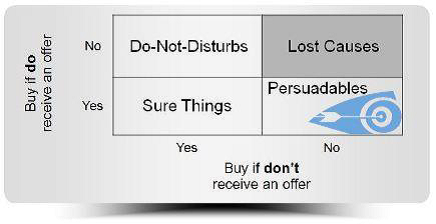 In churn programs this is a particularly big deal since some portion of customers will depart BECAUSE they are contacted.  Uplift modeling removes this negative effect from the campaign.  Potential churn customers are frequently described as being in these four clusters:

In response modeling we were taught that our scoring models predict response rate by decile.  But when you subtract the impact of the ‘control’ responders the true incremental response may have no relationship to your response model score! 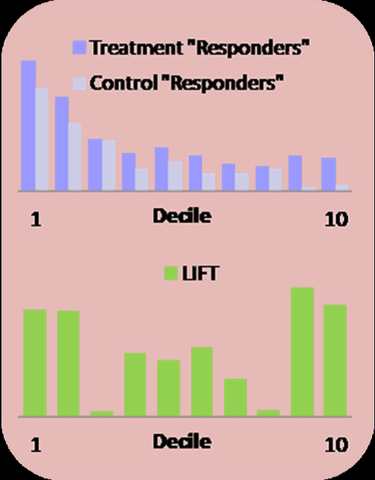 What is Uplift Modeling good for?  Principally for customer acquisition, up-sell, cross-sell, retention, and churn.  However you’ll also find it being used in applications as diverse as channel selection, dynamic pricing, electoral politics, and personalized medicine.

Who is it for?  Per Gartner, there has only been about a 3% to 5% adoption so far across all their surveyed customers.  Uplift is currently concentrated in financial services, telecommunications, and retail direct marketing.  That’s probably because one of the drivers for this is that Uplift requires a larger and therefore more expensive and complex test group since both the target group and the control group must be modeled.  As a round number estimate you’d need more than 100,000 customers to make this pencil out.

Another factor slowing adoption is that Uplift has not yet found its way into many analytic platforms.  There is an existing R package, and Gartner reports you can find Uplift in the analytic platforms by Dell, FICO, IBM, Pitney Bowes, and SAS.

Uplift modeling creates improvement primarily by reducing the size of the contacted group, and in churn, by reducing the number of actual lost customers caused by the campaign.  Some marketing departments might think of smaller contact groups as a negative (but not if you’re paying the bills).  Uplift may also reveal that previous targeting has actually been poor.  There’s anecdotal information indicating that uplift models may need to be refreshed more often.  But adopters report big improvements in campaign ROI.  One bank reported campaign ROI increased five times over previous campaigns, from 75% to 400%.  A large mobile telecom operator reported campaign ROI up by a factor of 11 fold.  If your customer base is sufficiently large you should be taking a look at this.

The original blog can be seen here.