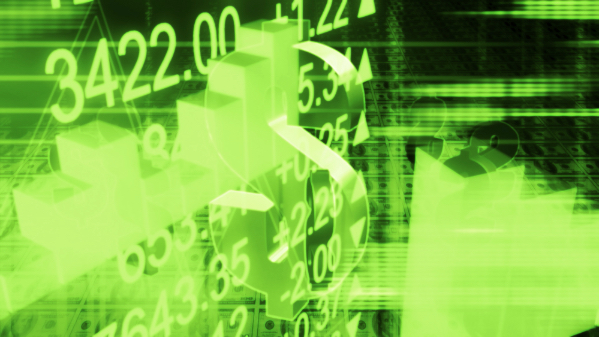 Population growth, shortages in housing supply, internal migration, immigration, cheap money, and foreign investors are just a few of the claimed causes of House Price Inflation (HPI) in New Zealand in recent years. The notorious example of HPI in action is NZ's largest city - Auckland. The city has experienced double-digit HPI of late with a polarising effect:

This analysis will attempt to shed some light on the cause of HPI in New Zealand.

Before digging into the numbers, some definitions are required:

M3: As per RBNZ [1]: The broadest monetary aggregate. Represents all New Zealand dollar funding of M3 institutions. Consists of notes & coin held by the public plus NZ dollar funding minus inter-M3 institutional claims and minus government deposits.

Inflation: More than one definition required as it is a contentious concept.

From Wikipedia [2]: In economics, inflation is a sustained increase in the general price level of goods and services in an economy over a period of time. When the price level rises, each unit of currency buys fewer goods and services. Consequently, inflation reflects a reduction in the purchasing power per unit of money – a loss of real value in the medium of exchange and unit of account within the economy.

From Investopedia [5]: A banking system in which only a fraction of bank deposits are backed by actual cash-on-hand and are available for withdrawal. This is done to expand the economy by freeing up capital that can be loaned out to other parties. Most countries operate under this type of system.

What data is available on various culprits?

Data is readily available on the following potential causes for house price inflation:

There are many other cited potential causes and perhaps scapegoats but they are not discussed in this brief analysis. 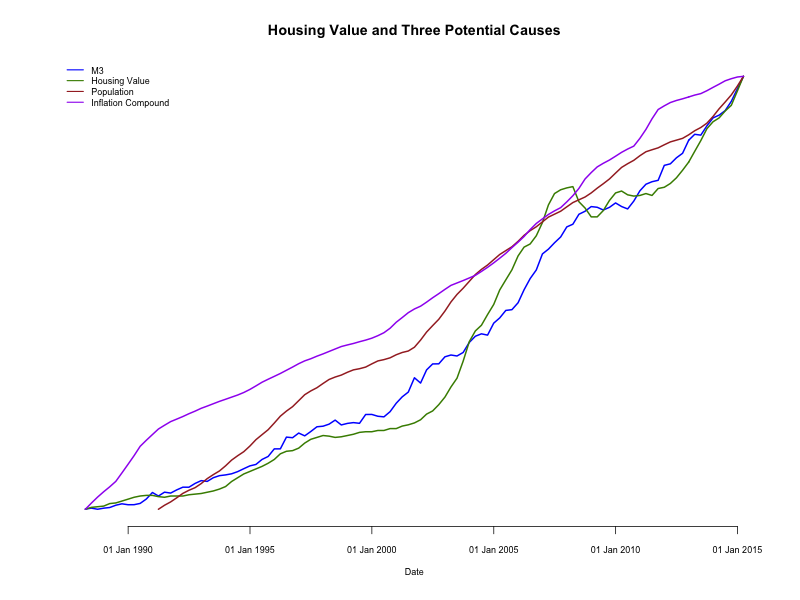 All four data sources are plotted in the above chart. In reality these data series would not be so close on a calibrated y-axis. However, it is useful to plot them together so as to gain a feeling for how closely related these data series may be. First impressions suggest the data series are similar.

Inflation as used here may be a bit misleading and also derivative rather than causal. One component used in the derivation of NZ's CPI is HPI. Therefore, it would follow that CPI and HPI should be related somewhat. Inflation is included here for interests sake.

In order to determine HPI causality it would be ideal if a metric could be derived from which the potential causes could be ranked. This is no easy task in statistics and certainly not achievable in this brief analysis. A metric that is readily available is the correlation coefficient. For the time series data identified the correlation coefficient with respect to HPI will be ranked.

It would be amiss to omit the well known statistics mantra:

This simply means that a strong correlation between two variables does not imply that one caused the other. There may indeed be a third confounding factor linking the two [7].

The Pearson correlation coefficient to HPI was derived for all three variables:

The next task is to remove the increase trend for each data series and try to isolate the underlying similarities.

Please note, compound inflation is used with a base date Q1 1988. 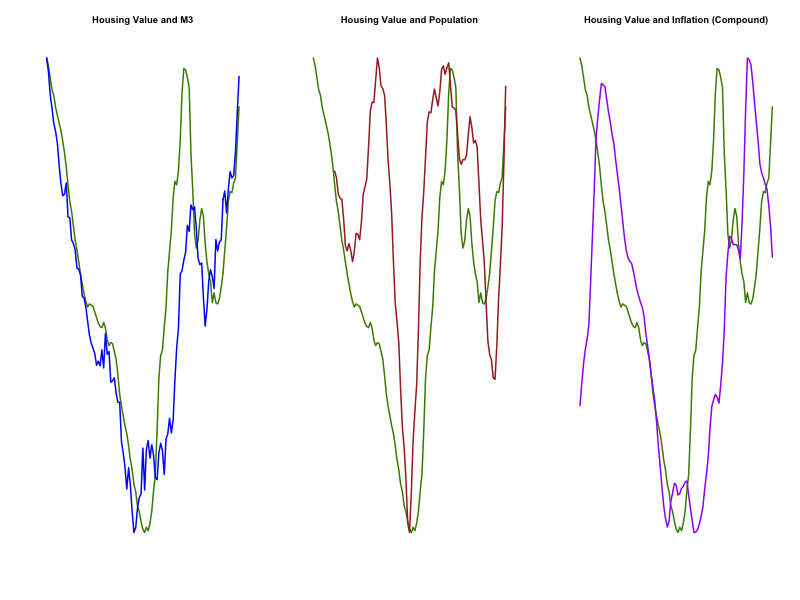 The above chart shows all three factors plotted against HPI (in green) once the trends have been removed. M3 & HPI are a much closer fit than population and inflation.

Using the four de-trended data series, the correlation coefficients are calculated and shown below:

To be sure the correlation between M3 and HPI is in fact correct lets take another look at the data plotted together: 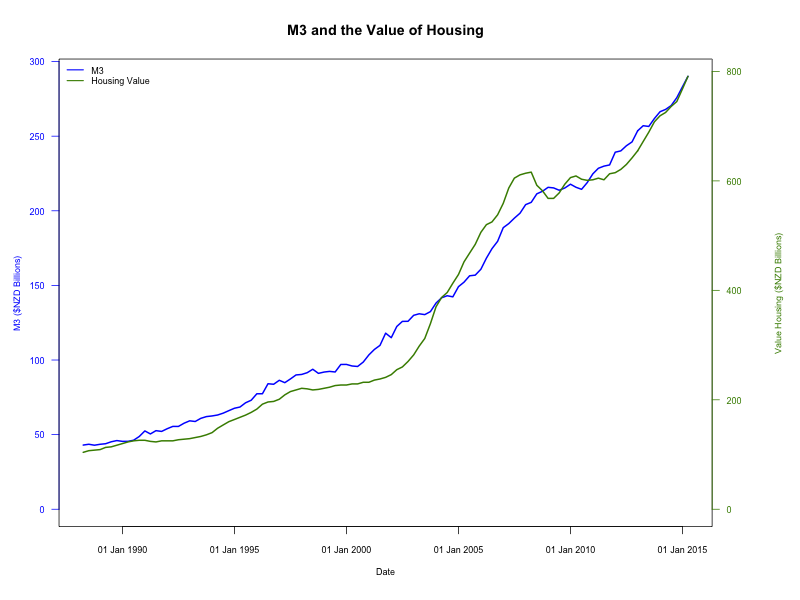 In the chart above HPI seems to be more reactive than M3 which makes rational sense and house prices are determined by purchaser sentiment whereas M3 growth is a downstream result of a decision to borrow.

The concept that HPI is strongly affected by money supply is not a new concept and brings to light many other related issues:

Here's a view from local economist Dr. Eric Crampton on house prices. It is the government regulation that restricts the supply of land. When supply is restricted, then of course demand skyrockets. Its not the chinese & foreign investors that drive the housing prices up. It is the restricting the supply of land by regulation & law  available for developers to build new houses to meet demand (the risk is on them & not taxpayers) is the problem. This is an economic fact which has been known to economists in the last 50 years or so, when town planning became the function of the government (which is not their primary role in a free society).  It is the Urgan Growth Limit restriction (by law) is the causes of high price houses.  Relax or eliminate this restriction & the market responds to the demand.

The real reason is Government interference in the free markets.

"House price inflation: a bubble in need of a pin"