Sociometric Solutions puts sensors into employee name badges that can detect social dynamics in the workplace. The sensors report on how employees move around the workplace, with whom they speak, and even the tone of voice they use when communicating. By analyzing data from smart badge technology Bank of America noticed that its top performing employees at call centers were those who took breaks together. They instituted group break policies and performance improved 23 percent. Another company, Humanscale, builds sensors into it’s line of office chairs, standing desks and work stations and offers companies their OfficeIQ system to monitor workplace activity such as how much time individuals have spent sitting or standing at their desk as well as how long they have been away from their desk.

In Ireland, grocery chain Tesco has its warehouse employees wear armbands that track the goods they take from the shelves, distributes tasks, and even forecasts completion time for a job. In other sectors, including healthcare and the military, wearables can detect fatigue that could be dangerous to the employee and the job they perform.

Fujitsu has just released Ubiquitouswear, a business package that can collect and analyze data from devices such as accelerometer sensors, barometers, cameras and microphones to measure and monitor people at work. For example, data such as temperature, humidity, movements and pulse rate can be used to identify when workers are exposed to too much heat stress. The system can also detect locations and even postures and body movements of humans to sense a fall, track someone’s location or estimate the physical load on a body. 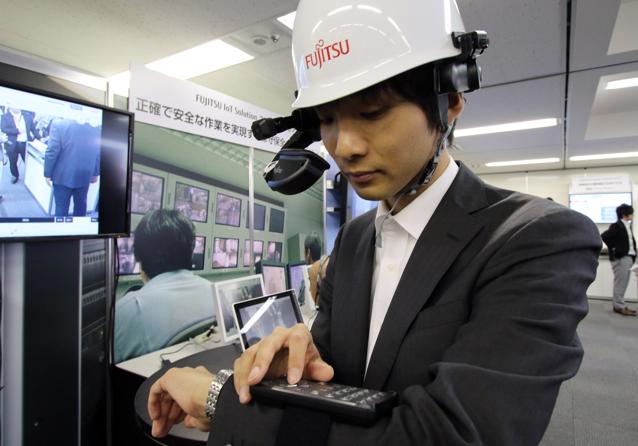 The external monitor parallels what’s already being monitored inside the body using health trackers such as Fitbit. Data already show that employees engaged in wellness programs show significantly smaller increases in the cost of their health care than those who aren’t. So far, employers can’t access an individual employee’s health records, but those days may not be far off, when a boss might take you aside to discuss your stress levels or the long hours you’ve been putting in at your desk.

As the world becomes increasingly digital, companies have endless ways to monitor their staff. Most things we do in a typical workday already generate a lot of data: we send and receive emails, we make phone calls or we operate equipment. But soon, there will be so many new data sources and so many new ways of cutting that data— using cameras, sensors or crowd sourcing data to measure every aspect of someone’s performance.

Should companies use this data to monitor staff? Is it even ethical to treat us like copiers and routers? One vendor, Cornerstone onDemand, believes it can help companies predict and improve employee performance. Its analytics software is able to take over half a billion employee data points from across the world to identify patterns and make predictions about hiring decisions and employee performance.

This kind of analysis can be used to identify the most successful recruitment channels or key employees that might be at risk of leaving, but my fear is that many companies will spend too much time crunching all the things they can so easily collect data on, including how much time we sat on our office chair or how many people we have interacted with, rather than the more meaningful qualitative measures of what we did when we sat on the chair and the quality of our interactions with others.