The Merging of Social Media, Big Data, Perpetually Connected Consumers and AI... Nirvana, or the End of Free-Will?

The Not So Distant Future

It’s Friday September 14, 2046, and you are at the airport getting an alert from your car that your 10,000 mile service is due, but something peculiar comes with your alert. It’s a question: your car asks you if you wish to have the service taken care of within the next 10 days, or after.

Your car’s smart system contacts the car dealer’s smart system and arranges everything, but first it checks your calendar and figures out if you are out of town on any particular day. It discovers you will be traveling for the day on Monday the 24th, so it books your car service to the airport from the service department, your airline and hotel reservations, and your dinner reservations with your client. It also updates your social profiles for you while sending you relevant information about where you are going, whom you know there, whom you have not been in touch with for a while that may be in the area, and a plethora of other intelligence useful for you.

Simultaneously, while you are waiting at the airport the activity on your social networks suggests a problem with the recent roll out of your new product, so your business intelligence system at the office sends you an alert, also with a question: “Would you like me to resolve this issue?” You reply, “Yes.”

The system engages with consumers to gather information on the issue, and then collects the relevant data points and alerts R&D, marketing, sales, and the CFO. This isn't just any alert they receive – this is a smart alert with resolution suggestions and action items built into it.

You get on your flight, which was picked for you specifically with safety and punctuality data in mind. After 4 hours, you land and receive another alert at 6:15pm, saying, “Product problem resolved, oh and by the way the car service for your trip on the 24th has been arranged, along with 3 other items, when you drop off your car for service that morning.”

Sounds like a dream right? Or is it a nightmare? 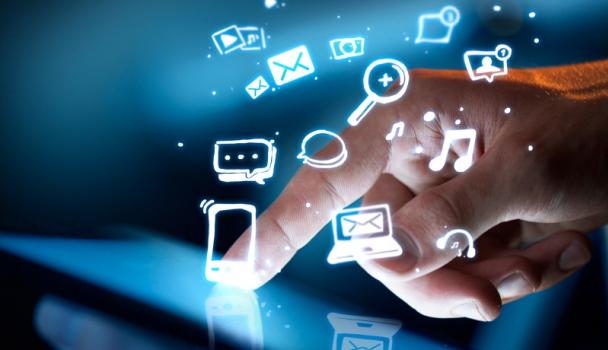 There is enough data out there on just about everything from weather patterns, markets, brand sentiment, consumer behavior, company performance across multi-platforms and environments, how much energy you use, how often you watch TV, read, sleep, and so on. The data isn't missing. So what’s missing?

What’s missing is the connection point’s intelligence to make sense of it all in a way that can be applied to everyday life, but the discovery of the missing link is not too far way. In fact, it was already discovered almost 5,000 years ago and documented.

What am I talking about?

I am talking about quantum mechanics. The laws of quantum physics and relativity suggest that everything is interconnected, in one form or another, and that one action can cause a ripple effect reaction elsewhere (aka The Butterfly Effect).

“Wait a minute, you say, quantum science was not discovered almost 5,000 years ago, this is a recent discovery.” A book written almost 5,000 years ago called the Sefer Yetzirah (Book of Formations), suggests the interconnectivity of not only human beings but all animate and inanimate objects across the universe.

Simply put, everything has a pulse, an energy pattern, or one could say a soul. If all things are connected, then it would only be logical that data objects from either a car’s black box or an energy grid are also interconnected. Right?

If machines can be taught to develop relationships, and respond to changes the way we as humans do, would AI introduce a whole new world that drives us forward?  Notice I said “relationships”, not just connection points, but as in emotionally connected relationships capable of reason, logic, and perhaps even feelings.

It’s been well established today that our surroundings influence how we manifest our own reality, and that what we think dictates how we experience reality. Long ago, we as humans did not operate this way, the words emotional intelligence (EQ), consciousness, and spirituality were absolutely foreign to most living humans. No thought was given to how one action could cause a reaction elsewhere, let alone any related consequences – until a few (EQ) giants of philosophy and spirituality began to speak of the connection between love, compassion, fear, rage, and everything that makes the human condition – well – non-animalistic.

While machines are smarter than ever today, they mostly take commands and instructions without much thought, reason, or rationality behind the execution; in reality there is nothing smart about software at all, other than what we’ve programmed it to do, on the flip side machines have no egos – they don’t need to justify a decision, think about their reputation, or plan for the future of their families.

Let’s go back to a time when we as humans were not that smart either with the exception of a few that were able to dominate, control, and often treat humans as if they were machines that can be turned on or off.

Knowledge introduced via works such as the Book of Formation was so beyond its time that anyone who possessed it was murdered, and it was forbidden to record it, hence it was passed down through oral tradition from generation to generation.

During the renaissance era, the printing press changed everything. You could say that the media has facilitated the explosion of knowledge we often take for granted, and we are much more civil today than ever before – except for a few leftover dinosaurs that still exist, we have all learned to develop a consciousness and understanding of importance in relationships.

Social media is such a big deal because it facilitates the fundamental human need to connect with each other and to experience life as we were meant to experience it: collectively, as one. Not to make this too much of an esoteric discussion, I think we've covered enough of that, but why can’t we teach machines to develop relationships and respond to circumstances?

I mean can’t an AI app follow me for a few months, figure out what I like to talk about, and tweet for me, post a blog, and initiate new contacts that would be relevant to me?  As in the example earlier, if the software program in the car is designed to have a relationship with you, it can be designed to have a relationship with other software programs to be useful and to add value by interacting with each other on your behalf.

AI – Is it Possible?

AI may not happen in our lifetime for a number of reasons, but there exists no reason why we can’t connect big data, social media information and perpetually connected consumers in such a way to simplify life by enabling the ability to, for example:

2)     Discover faster ways to introduce cures by not only getting feedback during R&D, but from people’s postings and behaviors; as in if someone starts behaving erratically after going on some new medication, by posting “out of context” (for them as an individual) information on the social media networks that data could provide useful feedback to the drug manufacturer that needs to be addressed before a crises happens, this would be possible by tracking its customer base via perpetually connected technologies

3)     Streamline how we do simple everyday tasks of living, as in car maintenance, house cleaning, laundry, shopping for food, planning travel, and booking meetings.

4)     A company planning an IPO could predict how it will perform, and may be able to make better decisions.

5)     A hiring manager may be able to identify how a new hire will fit into the culture, and align a career path that is appropriate.

6)     The airline industry may be able to respond to conditions in advance, to avoid the need for holding patterns and unscheduled breakdowns.

But on the flip side of the equation, this may introduce the destruction of free-will if not properly implemented by giving the user complete control over the personalized configuration.

Perpetually Connected Consumers (PCC) Big Data Will Change Life Drastically… Is it Worth it?

In this future reality where big data, social media, perpetually connected consumers (PCC) and artificial intelligence merges, markets will drastically change, as in some industries will simply cease to be relevant. Industries that will likely be doomed include:

As I started to write this, my intention was to think of a world where we could facilitate efficient use of our time with the assistance of technology, yet I am in a pickle now: the realization of AI may very well put an end to free will as we know it.