Analysis about marriage equality in US, based on 25,000 tweets

The data is in and it's conclusive: America loved the marriage equality ruling - by Justin Tenuto

Depending on the sites you frequent and the social media you consume, you might think the Supreme Court's marriage equality ruling went over rather poorly. Maybe you spend a lot of time in the comments section of the National Review or have that one uncle from Cleveland who won't shut up on Facebook or just saw some grim off-handed bigotry that stuck with you over the long weekend. The point is, if you're worried that Americans launched en masse into unhinged tirades about activist judges and the gay agenda and the sanctity of marriage, well, you don't really have to worry. Turns out we're roundly supportive of equal rights.

Yup. We scraped 25,000 tweets about gay marriage in the few days surrounding the ruling and found that about 80% of them were positive. That's a staggering metric, far exceeding what we see about nearly any other topic we've run sentiment around. In other words, that one uncle from Cleveland is part of an ever-shrinking (and yes, fairly vocal) minority.

So what did the 20% have a problem with? Which states were the most positive? And were men or women more supportive overall? Those answers, below.

Buckle up: here come the graphs.

Let's start with that first question: why did Twitter users disapprove of the gay marriage verdict anyway? Keep in mind, again, that only 20% of ALL tweets were negative, so the following graph applies to those and those alone. 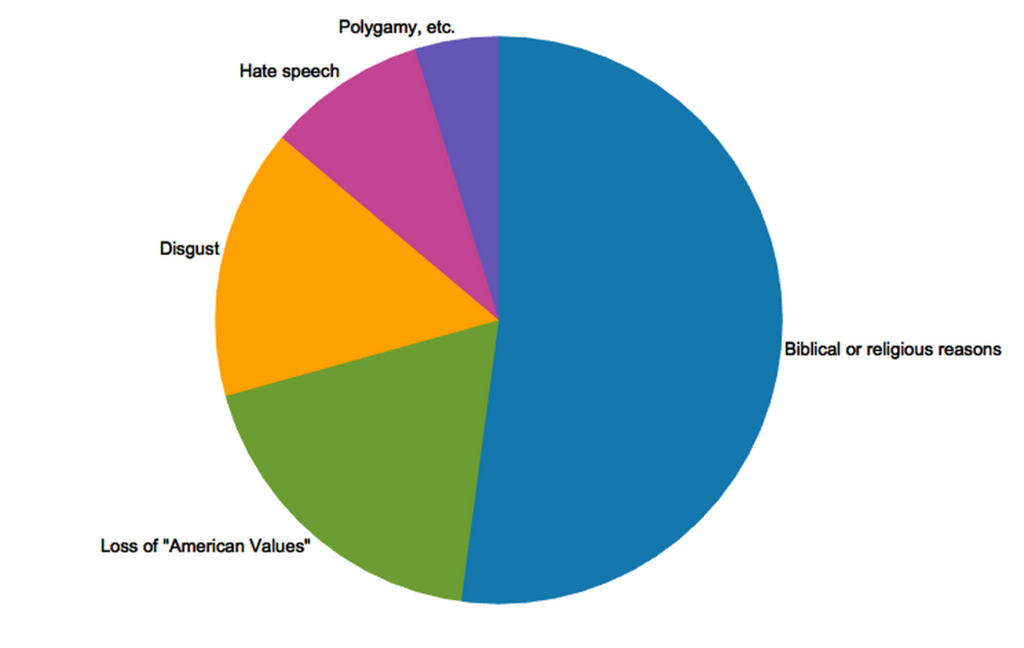 To wit: negative sentiment skewed towards the religious. Some of those tweets aren't really fit to print on a family blog, but read the this one and you'll get the gist: Biblical and religious gripes were followed by grousing about a loss of "American values", a complaint that was sometimes appended to a idle and heavily ironic threat to move to Canada. We say idle because people love throwing up their collective hands and threatening to move north with our continental neighbors; we say ironic because gay marriage has been legal in Canada for a decade. Googling things can be hard.

Men also had a higher tendency to simply tweet out news links about the case (which is what the majority of all "neutral" tweets were: simple links to the NY Times or similar outlets announcing the verdict free of weighted opinion).

No states were negative. None.

As we mentioned above, the first thing that struck us when we looked at the data was the overwhelming support for the ruling. That bore out across not only men and women, but across each and every state in the union. 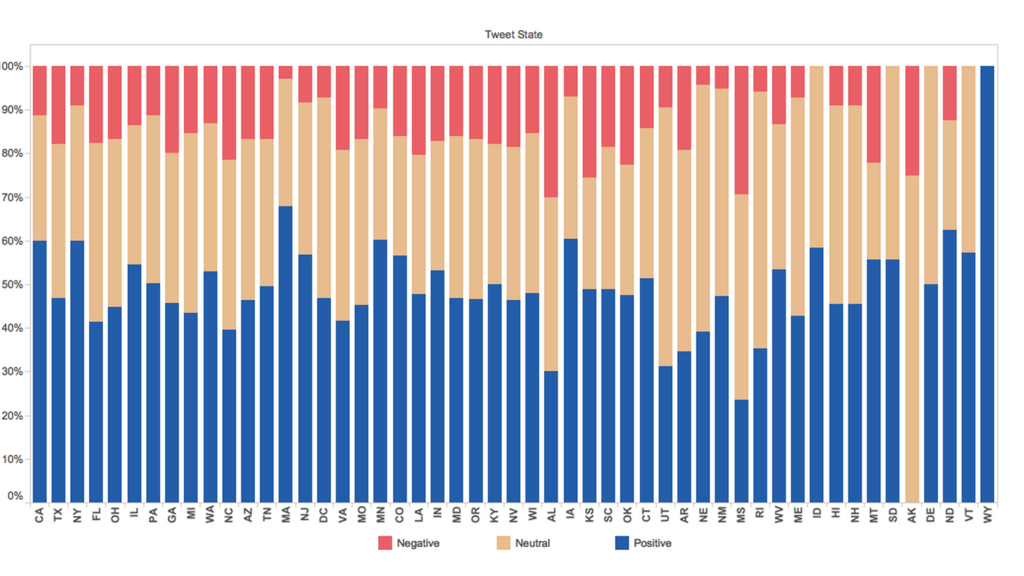 Alabama lead negative sentiment, which shouldn't be altogether surprising. This is a state whose House voted 79-12 to forbid same-sex marriages in the late 90s, then actually became more strident in 2006, with an 85-7 vote. Voters there agreed with the ban to the tune of 80%.

Still, with all that considered, only 30% of Alabaman tweets were negative. Maybe the folks who hate the ruling were quiet last weekend or maybe they were registering their disdain on some other medium, but low negative numbers in a state that roundly rejected gay marriage less than a decade ago is, well, pretty promising.

We went into this exercise bracing for a lot of negativity. We bet wrong. In the days after the Supreme Court (narrowly) granted equal marriage rights to same-sex couples, America resoundingly applauded. And when you consider where we were as a country in the early 90s, that's nothing short of amazing.

How we did it

First, we scraped Twitter for tweets using various search terms and hashtags, avoiding weighted ones like #LoveWins, where essentially every message was roundly positive. (For the record: 90% of our tweets had the terms "supreme court", "#SCOTUS", or "gay marriage" in them.)

Next, we ran a preliminary job to remove tweets from brands and news agencies, as well as the irrelevant tweets that always pop up during popular discussions. We made sure tweets were in English, from real live people, and were about gay marriage or the Obergefell v. Hodges ruling. After that, we ran a sentiment analysis job where we had our contributors note whether a tweet was positive, negative, or neutral, and, if negative, choose a reason (we only ignored positive reasons because they were roundly identical). Lastly, we ran a pair of demographic jobs to determine user's locations and gender.

Have questions? Email me: [email protected]

Hi Vishal - Thanks for the note. We got this information by asking our contributors to identify the gender of the [tweet] author. Check us out - www.crowdflower.com I'd love to see your analysis - Is it available online? URL, por favor?

Comment by Vishal Lala on July 12, 2015 at 7:07pm
Leena, i did a similar analysis of tweets but didn't use as many keywords as you did nor did I uncover gender or location. Could you share how you get gender and location, especially the former.