It took me about 30 minutes to notice a spectacular correlation between two core metrics related to the virus, allowing me to make better predictions about the evolution of this pandemic in USA, and to provide possibly the best advice on how to reduce your risk of exposure, or at least how to buy some time in the war against this virus.

First, many metrics are useless, you need to pick up the most reliable ones. For instance, the number of people who officially tested positive is meaningless: for each one tested positive, at least 10 were positive at some point, but not sick enough to get tested or require medical treatment, and are thus unaccounted for. See my previous article here for details. Based on that metric alone (death rate if testing positive), it would put the projected deaths in US well above 3 million. This is because we have had 5.6 million people officially tested positive and 174,000 deaths so far, that is a 3% death rate (see here). While the number of people who were once positive is grossly underestimated, the number of deaths is not.

My projection is below 600,000, and I will explain shortly how I came up with that much lower upper bound. A much more reliable statistics is looking at death rate per 100,000 inhabitants, per state, from lowest to highest. If you combine that data with the population density, also broken down per state, you will find a remarkable, high correlation. The data sources that I used are as follows:

Let us denote the death rate as R, and the population density as D. The correlation between log(R) and log(D) is 0.75. The figure below illustrates how the two variables are related: 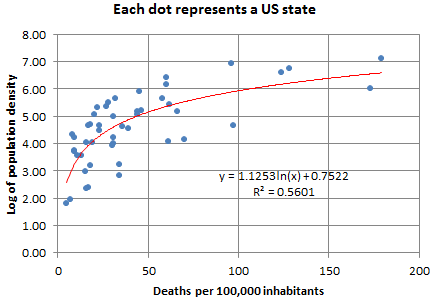 Below is the full table, broken down by state: 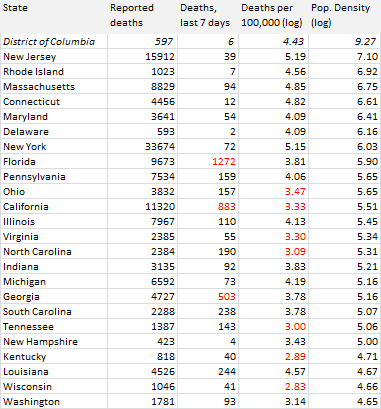 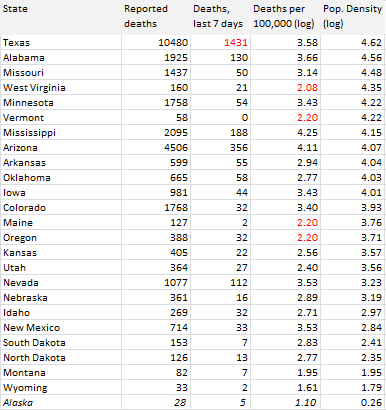 Of course, even the number of deaths is not a perfect metric. Death attribution may vary from state to state. Also demographics and lock-down rules also have a big impact. Yet despite all the noise in the data, a strong pattern emerges: states with lower population density fare better on average, at least for now. So, perhaps even better than wearing a mask or social-distancing, moving from a high population density area to a low one, may be be the safest thing to do. Maybe this remains true even within a same state.

The highest death rate per 100,000 inhabitants being below 200, and found in states that are now significantly improving (New York), it is reasonable to assume that in a worst case scenario, all states will reach that threshold over time, resulting in 600,000 deaths in US.

Note: you can do the same analysis per county, for any state. I did it for WA, see my post and conclusions in the comment section below.

The retail drug trade will drive the spread for a long time. Retail drug buys are based around non-threatening displays, and lonely people (buyers & sellers) force each other to feign social interest. This means they happen with masks, and of course inside.

Totally agree with your assertion that the number of test-positives is an unreliable indicator of actual cases. And more to your metric - I never understood why there was so little discussion of densities  early on, not that it wasn't baked in somehow. The experts in scarfs included the 100K leveling in all the narratives but p-density would be an obvious factor in arriving at an understanding of the propagation.  In essence, it does map the propagation to some  geo partition like say sq. mile(s), but as well would need to be weighted to account for the 'veins' of density, ( i.e., mass transit, Cosco Centers, flag burning protests, etc. ).

Brian, I believe that articles in news outlets (whether left or right on the political spectrum) are written by authors notoriously lacking (1) analytical thinking and (2) neutrality.

Let it put it this way. If a state X is going to reach 20,000 deaths and it is now at 15,000, it is closer to achieve eradication than another state Y that would also reach 20,000 deaths but is now at 5,000. Of course in state X the number of daily deaths may look very bad compared to state Y (precisely because it moves faster to resolution), but in the end, state X can see the end of the tunnel coming, and state Y can't see it yet, or believe that by some miracle it will never hit 20,000 deaths.

have you tried % population wearing masks and social distancing?

hmmm - the article concludes "states that are getting closer to winning the war: Florida, Georgia, Texas."

Thanks for the spreadsheet Vincent!

Here are some more interesting findings. I checked the same data for WA state (where I live). You can do the same analysis for your own state. Data comes from these sources:

The full data and results is available here. You can use the same data sources to get the data for any state. For counties where number of deaths is 0, I assigned the value 0 to the logarithm of death rate.

Hey Vincent, it looks like your calculations were done in a spreadsheet.  Any chance that you can share that spreadsheet?  Thanks!  Bill