Bayes' Theorem, which The Stanford Encyclopedia of Philosophy calls "...a simple mathematical formula" can be surprisingly difficult to actually solve. If you struggle with Bayesian logic, solving the "simple" formula involves not much more than guesswork. You have to translate a problem into "A given B" and "B given A", cross your fingers that you're guess for whatever A and B is is right, double check your thoughts, get thoroughly lost, and punch the resulting fractions into a calculator. The calculator will spit out an answer which may or may not be correct as you have no idea what your point-oh-something solution means in terms of the original problem. If this sounds like you, you're not alone: various studies have shown that the vast majority of physicians can't work the formula either.

But there's a more intuitive way to get to the same answer, without the counter-intuitive formula. The procedure in question? None other than the humble probability tree.

How to Use a Tree to Solve Bayes' Formula

This example problem is adapted from a problem in Gigrenzer & Hoffrage's How to Improve Bayesian Reasoning Without Instruction: Frequency Formats: 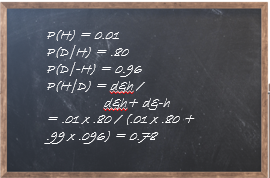 Now let's construct the same answer with a probability tree:

From there, the math is a simple ratio: 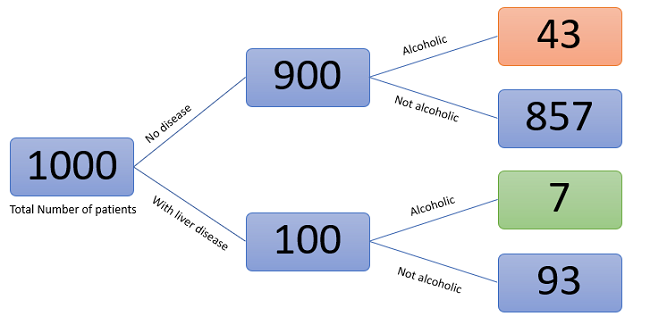 Like the first problem, the first branch here is also "disease", but the second branch needs to address "alcoholism" instead of "symptoms". We're not told "how many" patients, so I'll use 1000--which is usually a sufficient number for problems like this. You're also not told explicitly the number of alcoholics (or % of non-liver disease alcoholics), but you can use a little logical deduction:

7% of patients with liver disease are alcoholic. That gives you 7 (green box), leaving 43 for the orange box.

Now all we have to do is figure out the ratio:

Which is exactly the same answer you would get by actually working the formula. In fact, I've never come across a Bayes' related problem that can't be answered with a probability tree and a little logical reasoning. So if the formula is giving you headaches, just do what I did--and ditch it in favor of a more intuitive approach.