I recently wrote about a stock trading approach that I call skipjack: it allows the user to trade directly from special charts by exploiting skipjack waveforms and formations.  I mentioned that I use an application - a simulation environment - to trade from these charts.  Below I present a screenshot of SimTactics, the application that I created to support this simulated trading.  To the right is a notepad containing four trades generated by an autopilot feature of the SimTactics.  Over the time period, the Nasdaq Composite increased 41.72 percent.  SimTactics squeezed out 61.44 percent before closing out its position at the end of the data file.  SimTactics makes use of a risk-based index constructed from the same waveforms that support skipjack stock trading. The main problem with manual stock trading is that it requires a lot of effort.  Because a human is involved, the results might be inconsistent.  Also, markets move quickly - perhaps faster than the skipjack trading model can handle well.  I have shown however how manual trading can sometimes deliver relatively high returns over short time periods.  It is a perspective worth maintaining.  But in this blog, I will be introducing the use of Thunderbird Charts to study algomorphology.  This technique supports a different type of trading.

SimTactics uses combinations of buy-and-sell percentages to respond a "trigger package."  This package is made up of the Levi-Tate group of technical metrics that I designed for skipjack.  For example, a snap buy-and-sell combination of 23/24 means that SimTactics buys at a risk level of 23 percent or below and sells at 24 percent or above.  Now, if a matrix is created to study many possible combinations, the result is a Thunderbird Chart as shown below.  This chart contains data in the year prior to the stock market crash of October 1987 for the Dow Jones Industrial Average. Any combination in the deep purple area would have resulted in a 30 to 40 percent return.  But wait, how about the crash?  Indeed, let use step back and consider the period before, during, and after the crash.  Suddenly, the returns are much lower.  This only tells us that the best place to be during a crash is not in the stock market.  However, it is no simple matter simply sitting on large amounts of cash particularly for portfolio managers.  Even for retail investors, it is unclear how long precisely to avoid the market.  Avoidance also represents loss of opportunity.  The light green area below experienced returns from 20 to 40 percent - significantly above the market return of 5.44 percent during the same period. 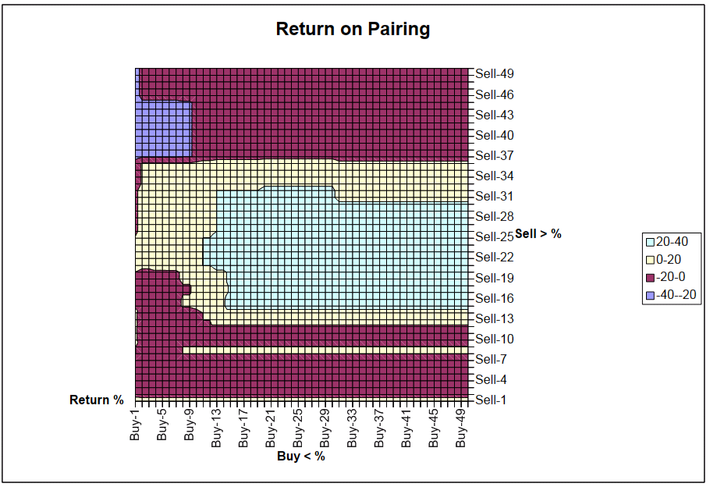 There is some level of overlap in terms of optimal positioning.  The chart below shows that best-performing combinations occupied a thin band on the Thunderbird Chart.  It is a curious sweet spot well worth further investigation. If it is possible to buy a market-indexed ETF rather than individual stock, personally I would avoid the uncertainty posed by selection.  However, everyone is different.  The stock below increased about 11.79 percent.  The chance of beating market is reasonably good within the deep purple area - keeping in mind that I can refer to the spreadsheet grid.  Then there is quite literally a sweet spot in an unorthodox location that I myself would never deliberately choose.  Why?  Well, optimum - or maybe I should call it optimus after the transformer - is in motion.  The spot will likely move in the future.  At the same time, the whole idea of studying algomorphology to ascertain what underlying phenomena bring about the quantitative outcomes 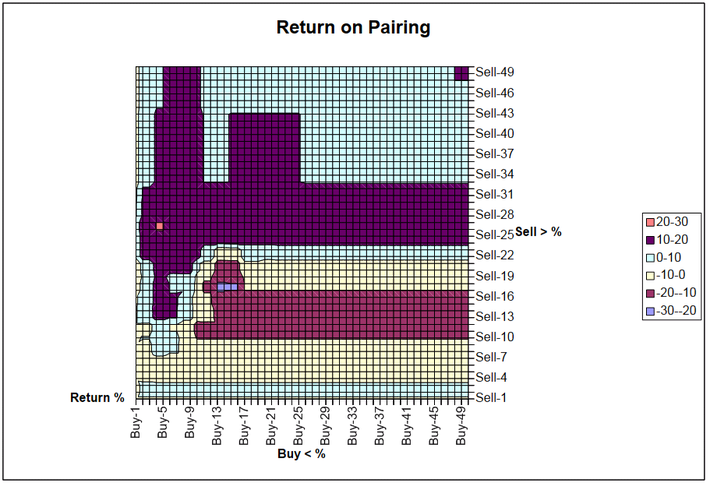 So far given these charts, I suspect readers have a sense of "normal" versus "abnormal" tactical placement.  But I will be studying the point in greater detail - examining different investments under changing market conditions and cycles.  I know that this is an interesting way to think about investments and algorithms.