Structural data holds information about the relationship between events. Some key concerns include the following: 1) how these relationships should be conveyed from the user to the computer and from the computer back to the user; 2) how the data should be configured to allow for systemic evaluation; 3) how to effectively store large amounts while allowing for rapid access; 4) how to reliably transfer the details between computers regardless of operating platform; 5) how to process the data to achieve different strategic outcomes; 6) how to arrange the data in order to express the relevance between events; and 7) how to ensure current design does not limit future application. These are challenging technical, philosophical, and strategic points that will have to be considered over years of development.

The structures formed from events are graphically portrayed only to allow for human interpretation; such images can also be modified and then converted back into data form. I describe the structural and non-spatial integration of external meaning as transpositionalism. I cover this topic in my blog on the Geography of Data. The idea of addressing issues of material structure over elements of data that lack material substance might seem perplexing: one can reasonably argue that the structure of a worldly item does not necessitate any particular data structure. But I consider it important to distinguish between structure and physical form. Changes in form do not require changes in data structure. But rather, all that is structural is so because of our recognition of it; and in order to regulate recognition such that structures become apparent, the data has to operate in specific ways. So although structural data does not necessarily mean that the data per se assumes a particular form, nonetheless its use and manipulation is most effective if it is optimized for structural expression. 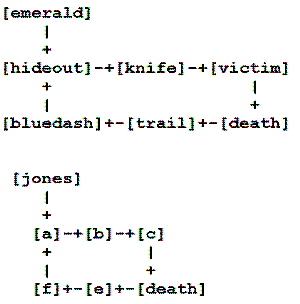 In the above image, I provide examples of two violent individuals that kill for cash; in the first case, the killer ran back into a crowd of people for cover in the same direction that he originally came (Emerald Street). Although I removed details from the second case, it is clear the killer likewise made a circular trip in relation to a particular starting point (Jones Street). These are hypothetical cases just for the blog, of course. An important objective of structural data is to enable computer access. Without knowing exact details, a computer might conclude from the above that these cases involve the same killer. A computer can silently skim through years of structural data searching for patterns and similarities.

The mechanical drawing approach to structural expression is worthwhile due to ease of interpretation and modification (by a human being). A busier-looking image - that is practically impossible for a person to handle on sight and by hand - might be entirely computer generated as shown below. I am not too fond of these types of images although the patterns generated might have aesthetic value. The structural connections can be portrayed in different ways; but it is important to note that the graphical depiction or material presence is separate from the issue of relevance or significance. It is not the magnitude or distance between events or even the direction of the connections that matter. But how might one express distance in such a framework? The quantity should be converted to a quality; thus, quantitative analysis does not take place at all. 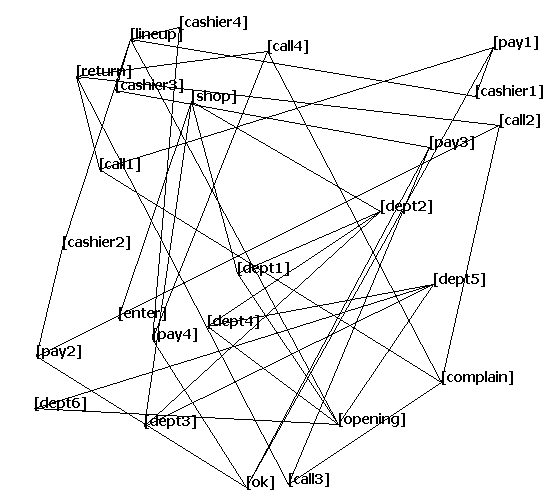 A qualitative event has no externally defined magnitude. One might attach 5 kilometers to a relationship, but this can mean anything; from a structural standpoint, it is no different than attaching Fred or frog to the relationship. Jodi might be happy. But who is to say what exactly happiness means to Jodi. She could be Fred, frog, or 5 kilometers. I know that probably sounds nonsensical. Just keep in mind that computers generally have no sense. Connections are possible irrespective of sense. Consequently, a government department might require a citizen to process to line J before returning to line U; make a payment at line K before being interviewed at line C. The exact sense of the design is immaterial. Structural meaning need not follow good design.

Based on my early description of the system thus far, it should be apparent that it is not at all statistical or even quantitative in nature. Its use might therefore serve to contrast the role of statistics: e.g. "What is the chance that J. O'Smith perpetrated the act in question on 2015-01-17?" is not a statistical question. In fact, a statistical perspective might be largely irrelevant. Consider the problem of hypothesis testing requiring a sampling containing facts external the specific case: e.g. John O'Smith is Irish; the Irish have been implicated in 75 percent of these cases; therefore, it stands to reason that John O'Smith perpetrated the act. Regardless of whether or not any of this is true or is reasonable in a statistical sense, the assertions would stand up poorly in a free society. I would argue that the question posed is actually structural: the legal system is concerned about structural plausibility and soundness.

The faultiness of a statistical perspective is particularly acute in relation to social elements that are deliberately evasive: "What is the chance of a terrorist attack right here and now?" It is always extremely low. The more pertinent question is, "In light of the circumstances that will exist at the time, how might an act of terrorism take place?" The statistical question is perhaps easier to answer since the amount of data in the analysis is constrained; however, the results of any calculation are likely to be superfluous. The structural question is extremely difficult to address - at least, for a human being - since the structures in play might be massive and multifarious. Given the choice between impossible and technologically intimidating, I rather wade through a swamp than bathe in acid.

Theoretical Basis for Organizations and Systems

I once attended a class that had as its invited guest speaker Dr. James Kay, an individual with a background in thermodynamics. He later joined the Faculty of Environmental Studies. In his examination of different ecosystems, he found that the energy leaving an ecosystem is less than the energy entering. The more complex the ecosystem, the greater amount of energy it seems to retain. This phenomenon can be explained if we consider vegetation in the mix of complexity. Plants hold energy and many other types of inputs in the process of forming biomass. It can be said that the gases formed by heating liquids also represent increased complexity; and the transition from gas back to liquid does indeed release energy. Consider a scenario involving people where stresses are applied to a community for example as a result of a natural disaster. I would argue social fragmentation is an aspect of complexity - specifically, systemic desynchronization - giving rise to structural differentials in formerly homogenous bodies. I further suggest that the formation of these structural differentials represents an attempt to adapt to the stress. My focus here however is the resulting structural data that might provide insights into alienation, radicalism, terrorism, and rioting. 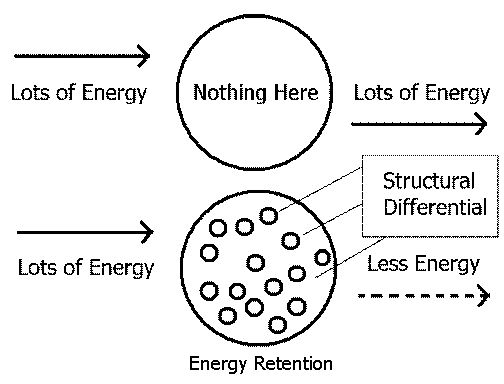 The two main patterns I would expect to find regulating the extent of the structural differential or systemic desynchronization are as follows: patterns of participation bringing forth inclusion and stability (not to be confused with increased survivorship); and patterns of disablement responsible for disengagement and fragmentation. I believe that to detect and follow the progression of these patterns, it is necessary to make effective use of structural data. To me, it seems unlikely that the patterns can be monitored without some type of Syscatch mechanism.

I hope to eventually gain the ability to compare the structural patterns associated with post-disaster relief efforts. It seems like a worthwhile and peaceful area of investigation. In this case, there are clear external complexities that form and persist. There is also the formation of a coherent group of victims unified by their mutual distress and need for support; they are likely to exhibit traits of a disenfranchised ethnic group or visible minority. They are disadvantaged in a material sense but also in terms of being socially labeled and set adrift. This is an area of study for which algorithms are not normally deployed. 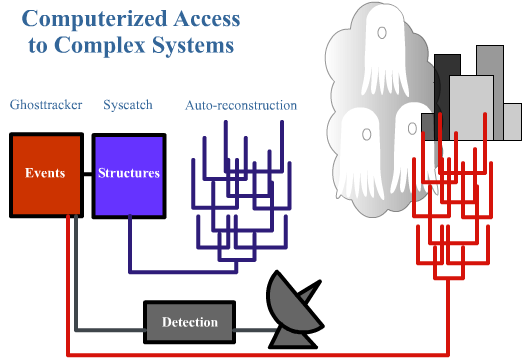 Having proposed a basis of theory for systemic differential and a particular type of data environment to examine those differences, I sketch out how I expect everything to fit together in the illustration above. Events and metrics of tangible and intangible elements (buildings and ghosts on the image) support the formation of inferential structures. These structures can be used to support intervention initiatives. That is the strategy in a nutshell. There is a process of auto-inference in the formation of structural events, which might be described a "deconstruction" process: this determines what facts seem to be important. Although I don't dispute that a tremendous amount of math exists in deconstruction through the use of algorithms, it might be difficult to regard the math in traditional statistical sense. Later, there are operations that would follow during the "reconstruction" process involving the use of elaborate structural data objects: this asserts how the facts seem to be connected.

Depending on the readership of the blog, I suppose some people might be wonder if a system might be able to detect real ghosts. Well, by ghosts I actually mean intangibles: things that might be in motion, state of progression, deeply embedded, and highly entrenched. However, the social manifestation of apparitions might at times extend from the collective and individual adversity faced by distressed individuals. Humans are complex. It seems non-constructive for a system designed to study complexity to selectively disregard aspects of it.

I just want to mention that the development name I used in previous blogs for the processing system has since been replaced by a formal production name: from the Shatterdome to Syscatch. Sadly this is the last time anybody will read about Syscatch. This then is the direction of my journey. I don't expect any big developments quickly. A lot of effort is probably required along the way. It is for this reason that I decided to greatly reduce my blogging activities and instead focus on the day-to-day rigors of development. There is often a lot of talk about what data science is and who gets to be called a data scientist. I think we often encounter the argument that statisticians are data scientists. However, statisticians would not normally handle structural data - at least, not using statistics. Structural data is part of a different paradigm. Consequently, I'm not too concerned by the statistically evasive nature of structural data. I hope for progress towards its theoretical development and practical application.