I heard an accountant once say that people in his profession are generally bad investors. I am uncertain if this is true. I never really bothered to confirm his assertion. He said that his reasons for believing so relate to the nature in which accountants interpret data, which he implied was rather literal. I personally almost always ignore "book value" - that is to say, the cost of acquisition. For me, the book value is similar to a figure of speech: the investment value never has to be aligned with the book value. Some investors might regard a stock trading at half its book value as a bargain rather than sign of potential asset impairment. Conversely, a stock trading at double its book value - like a successful NHL or NFL franchise might be appraised at many times book - might be regarded as expensive. Yet it seems to me, an accountant should be well aware of the distinction between book and market; it is possible I was simply speaking with a bad investor who preferred to blame his profession rather than himself for bad decisions. I have never personally known a statistician heavily into the stock market; yet I am certain that some have been hired specifically to do market research. It would be interesting to study the investment skills between individuals from different disciplines. It is important to note that in relation to stock prices, the prices have little to do with the underlying stocks. A company that has a high stock price is not necessarily managed any better or is even more profitable than others trading lower. The price measures how people feel about the company. It is a socially constructed index just like volume. In order to explain this perplexing sentence, consider the interesting illustration below.

I will explain how I came up with the illustration a bit later in the blog. But for the moment, I ask readers to go along with me in terms of the algorithmic operations: on the x-axis, there is an algorithmic gradient of daily trading price; on the y-axis, there is the same but using volume. Essentially, this chart is designed to indicate which stocks sort of "dance the same way" in relation to price and volume. (The prices and volumes are not necessarily similar in absolute terms.) I circled and coloured in red what we in Canada refer to as the "Big 5" major chartered banks: Royal Bank of Canada; TD Bank; CIBC; Bank of Montreal; and Scotiabank. Also for comparison, I coloured two smaller banks in pink: Laurentian Bank and the National Bank. I colored one insurance company in white: Manulife Financial. The illustration indicates that the Big 5 banks "fly together" while the other financials are sort of doing their own thing. Again, the technical trading data tells us nothing about the companies; but I suggest that we can reasonably infer how the market lumps the Big 5. 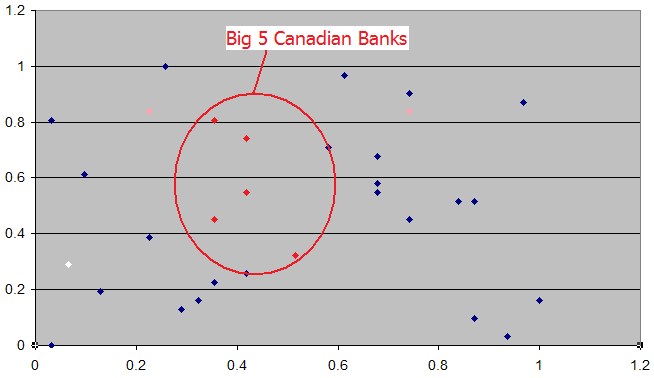 In showing where these companies appear on the illustration, I am not actually saying anything about the companies themselves. I have back-tested performance in relation to different positions on the chart. I find that the positions are not particularly relevant to performance. So please do not use the chart to "externally define" the meaning of the positions in relation to investment. The algorithms have no information about the companies. It is impossible for trading algorithms to tell us about the companies. Consequently, the illustration derived from algorithms tells us nothing about the companies. As I pointed out earlier, I merely offer a type of insight on how people might feel or perceive players in the market. People interpret the relationship between stocks based on their personal situations - experiences, education, income, and risk tolerance. I personally always read financial statements and bulletins especially for what I call "cover-my-butt disclosures." An executive might avoid jail time by saying that he or she provided full and timely disclosure, buried though it may have been in hundreds of pages of fluff. So my interpretation of statements affects how I feel about stocks.

I claim that prices and volumes are products of social construction. Yet I do not dispute how the same data can be handled in a manner quite insulated from society. If the trading data were purely reified, one might ignore for instance how a company is losing customers. Well, the financial statements tell us when revenues are declining. I mean loss of customers in a bigger sense that provides us with reasons. It is a complicated argument to make - for example that educational levels and sense of social membership can affect how people feel about products and therefore the companies that make them. For example, consumer sentiment surveys were once used as a bellweather for the markets: this type of reading could theoretically predict the demand for durables and new home construction. However, for the remainder of the blog, I will be discussing in greater detail how I reached the illustration.

1. Making Use of Running Totals

I got to the illustration using a complicated route; perhaps it is not the most efficient approach. Let's consider the idea of "trading volume," which perhaps makes no sense at all for a great many investors. Does high volume mean that people like the stock? As far as I can tell, volume doesn't mean anything about liking or disliking stocks. Sorry. I know what it should mean or what I would like it to mean: as prices go up, demand should decline. However, I simply couldn't find anything during back-testing. So never mind about making money. Volume is actually an interesting measurement from the standpoint of determining common dance. I used a running total of the volume. Just to demonstrate how this works, I generated a thousand random numbers from 0 to 10. Below on the very top chart, I distributed the random numbers from 0 to 10. The equation "f(x) = m x + b" for the trend line reasonably indicates "m = 0.0004" and "b = 4.9967." If on the other hand the points are added as a running total, in the middle chart we have "m = 5.1989" while "b = -37.142." The value for "b" is actually irrelevant since, for any given line segment, this amount whatever it might be gets cancelled out. Consequently, "b" is near 5 for an ordinary longitudinal distribution; "m" is near 5 for the running total. 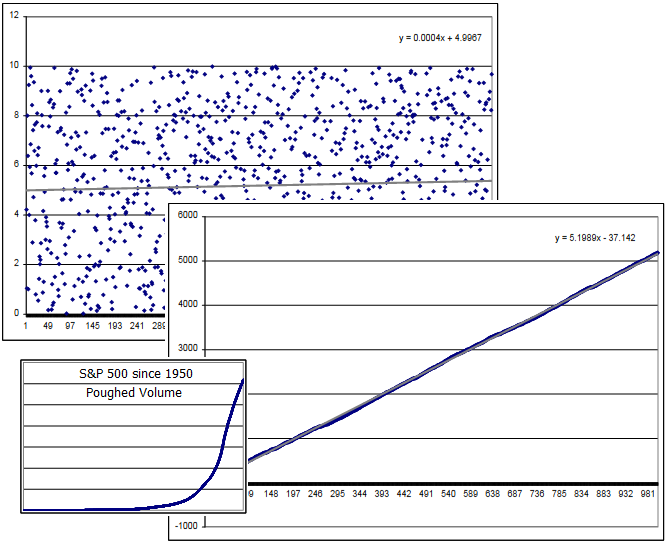 I added a third image above, the running total volume for the S&P 500 since 1950; this is mostly to show that the running total in real-life doesn't necessarily result in a straight line. So in a manner of thinking, the effect of volume is probably similar whether the individual points are used or the running total. The charts merely have to be interpreted a bit differently: e.g. a flat-line on a running total price chart means death for a stock - the shares being literally worthless. For me this is important, when the running total is used, distortions caused by timing become less relevant. For instance, if an institutional trader wants to buy 1 million shares of a stock, doing so all on single trading day might be possible although probably not feasible. There might not be enough people interested in selling on that day; this could force the trader to offer higher prices thereby driving the price up. If the trader spreads the purchase over maybe 6 months, the likelihood of doing so at a reasonable price is probably better. For other investors studying the individual elements of volume, that 6-month acquisition might be barely distinguishable from background noise. But if a running total is used, the cumulative impact noticeable. Below I show the running total volumes for stocks in a number of different industries. Imagine what may have led to the bumps. 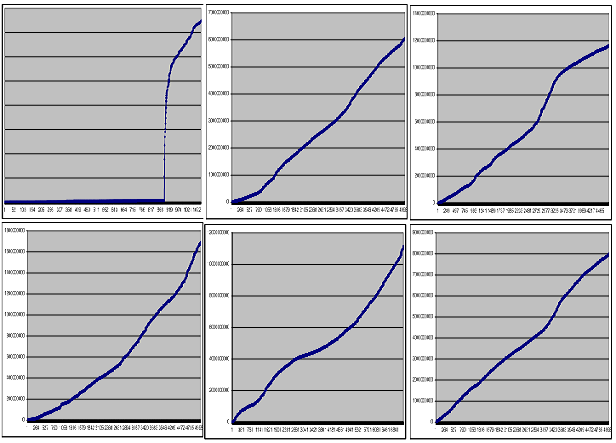 2. Creating a Plume from a Differential Algorithm

3. Screening for Similarity and Placement

Ignoring the fact that the running total can significantly reduce temporal distortion, I think it would be much easier to use correlation to evaluate similarity. However, correlation doesn't help to indicate placement on the chart. Or at least it doesn't help on my chart. To determine similarity, the plume differentials can be extracted (by subtracting one plume from another) line by line for each trading day. The extent to which two stocks are similar is indicated by how often the differences fall within a specified range. In order to demonstrate the effectiveness of this approach, I tried to get the stocks on my database that "dance" most and least like Microsoft. I found the pricing most like the National Bank (correlation = 0.906) and least like Cameco (correlation = -0.275) during the comparison period (2010-01-01 to 2015-01-01 using pricing adjusted for dividends and splits). I present the individual price amounts rather than running total (although the running total was used for pattern recognition.) By the way, National Bank as I mentioned earlier is one of Canada's smaller but prominent banks. Cameco is one of the world's leading suppliers of uranium for nuclear reactors. Currency differences were ignored, this being just a pattern comparison. 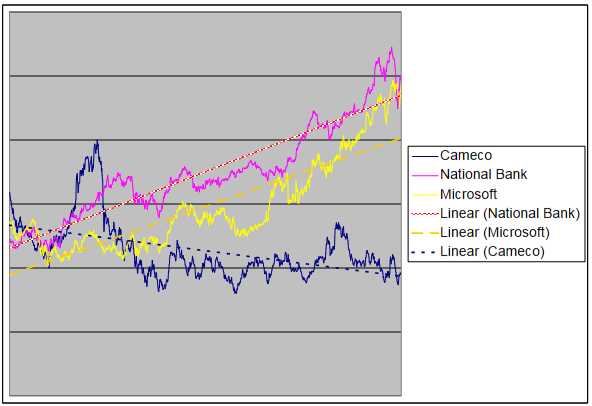 Positioning or ranking is determined by how often other stocks fall above or below the individual slot values as one goes across the sequenced array. Consequently, this is not merely a comparison of differences but also direction. However, the position falls within the boundaries 0 to 1 for both price and volume: 0 might be regarded as last place while 1 is first - although as I mentioned earlier placement doesn't actually seem to relate to performance.

While it is not necessarily always the case, sometimes things that fly together are in fact birds of the same feather. I believe there are many ways to apply this general principle. While birds probably fly and stay together by choice, the factors contributing to those choices could be environmental. In this blog, it would understandable to suggest that banks fly together because they share some similarities. But actually, the technical data contains no information about the banks; there is nothing to suggest that they are at all similar. Instead, the similarity is drawn by investors. There is a social environment - an elaborate ecology - influencing placement. Our perceptions bring forth the existence of connections and similarities. We therefore provide placement not for the banks but our perceptions. Through technicals, we measure not the stocks but ourselves. We invest in our dreams and flee from our nightmares. We also invest for financial security and possibly for some even happiness - whatever any of this means. Given our expression of things inside influencing or decisions outside, it may very well that stock market fluctuations extend from phenomenology. But of course, those things occupying the deeps of an individual might be the product of an externality perhaps both pervasive and ubiquitous. It's such an interesting thing to pay analysts a great deal essentially to decide whether to buy, sell, or hold. It is so important to be sensitive to the world and ourselves. The algorithms have an important role to play. But I think it can be short-sighted to reduce investment decisions to simple mathematical problems.