I rarely get to use a walkie-talkie during a course in school. As the snapshot of my desktop shows on the image below, I had both a multi-line telephone and portable radio. Just before the exam, I participated in a simulation. Our tabletop exercise contained an emergency scenario: a train derailment involving the evacuation of residents. I served as the Social Services Director. Although I didn't choose this role for myself, I thought it made sense given my graduate degree in the area of disabilities. I found it intriguing watching the organizational process unfold - and to some extent collapse before my eyes. Order and good intentions transformed into disorder and some level of chaos. The idea of having a "plan" is extremely important particularly in the delineation of roles and responsibilities. When such things are not determined in advance, there can be lack of organizational coherence during the emergency. Today I will be blogging about some informal research that I initiated shortly after the exam. It relates to the systematic use of electronic documentation. I gathered some "emergency response plans" from the internet. In Ontario, municipalities have to develop and adopt these emergency plans. After collecting several dozen of these documents, I quickly wrote some code to mine for incidents of important keywords. During an emergency, it is sometimes necessary to evacuate people. The evacuation of people with disabilities is challenging due to their unique needs and demands on resources - challenging that is, if there is no plan. Adding to the complexity of the situation, not all people with disabilities necessarily self-identify. For example, a person with cancer might not "appear" to have any special needs. At any given time, the data that we have about people might barely reflect the realities that they face. I think within a population there is always a spectrum of different abilities. It is quite inappropriate to lump everybody together as if differences never exist. They always exist. It is reasonable to assume that during crisis scenarios, people become more challenged; and even those that never identify as having a disability start to exhibit levels of impairment. They are pushed to their limits. Their ability to cope with a crisis might be limited. It is therefore necessary to plan - to accommodate diversity. I thought it would be interesting as a data-mining exercise to search the electronic documents for keywords indicating different aspects of sensitivity.

As I mentioned earlier, this research is rather informal. I wasn't too careful with my choice of keywords. Plus, I only made use of 35 emergency plans. (There are definitely more than 35 filers.) There is also no guarantee that I have the most up-to-date plan, or that the plan I am using is in fact the plan submitted to the province in order to comply with the legislation. Theoretically, in support of 6.2(1) of the Emergency Management and Civil Protections Act, presumably there is a large database containing every plan ever submitted. Perhaps I will be able to locate it at some point if the database is accessible to the public. Below I present the percentages for keyword series' that contain at least one match. The table will show that nearly all of the plans (97.14 percent) mention "death fatality fatalities casualty casualties" (at least one of these words in the series). These are emergency plans, after all. The high percentage would tend to confirm the effectiveness of the mining approach: standardized keywords seem show contextual alignment. I was surprised that less than a third of the plans (31.42 percent) mention "disabled disability disabilities." When I originally ran the mining program, I didn't use the term "special needs"; including this term in the series, the distribution would increase from 31.42 to 40 percent. I'm going to suggest that "special needs" is almost too vague to be useful from a planning standpoint. I can imagine myself running the program using thousands of keywords and performing complex algorithmic comparisons: e.g. given a body of emergency plans known to be "good or excellent," I might be able to determine non-compliant plans (neither good nor excellent) through differences in sensitivity map patterns. Of course, such a scoring regime would only provide helpful "indicators." In order to make a specific comment about a particular filer, it is necessary to review the documentation manually. The bulk comparisons are probably best for identifying extremely good and bad plans - the latter indicating a need for further investigation - and to do aggregate assessments. "Our algorithm suggests that your plan is extremely poor. Upon closer inspection, it seems you submitted payroll documentation rather than an emergency plan."

If a town has a committee to review emergency procedures involving people with disabilities, an emergency response plan would certainly be a reasonably good place to mention who to contact - well, in case of an emergency. I can imagine the impacts of a disaster such as a massive flood. There might be a need to evacuate some the population. But what if none of the vehicles on the scene can handle wheelchairs?  Or perhaps those with visual or hearing impairments are not made aware of the rescue vehicles. Some residents might face might face literacy or comprehension challenges. Who is going to get saved during an emergency when resources are stretched and people are running about like headless chickens? When decisions have to be made during an emergency, they don't necessarily consider all of the social consequences. Having a plan helps to promote inclusion of people with diverse needs. It also fosters greater levels of accountability among those responsible for planning. In my next chart, I decided to give each filer points based on the frequency of use of keyword; then I set the scores from highest to lowest. There is a clear winner in the bunch. 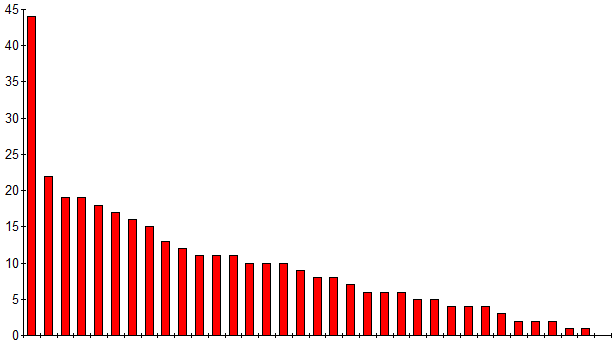 Below are the "Top 10" scorers from highest up top to lowest on the bottom. There were 35 documents scanned. The filer at the right end had no points! Presumably its plan doesn't even mention how to handle fatalities in an emergency. I say "presumably" since I haven't read the plan. Perhaps I downloaded something only resembling an emergency plan. I was thinking that it might make sense to enhance the checking system - to make the software more intelligent. The benefit of this systematic approach - which I readily accept is far from ideal - is its low-cost nature particularly for repetitive checking. There might be hundreds of plans to review annually. I believe that policy-makers sometimes simply want an idea of how the collective seems to be handling a particular social issue or emergency.

I was thinking of posting detailed sensitivity maps online as a public service. I might consider this in the future. The ultimate objective is always to save lives and serve the public good. Even a plan that needs work is better than no plan at all. I certainly wouldn't want to contribute to any kind of confrontational atmosphere. However, in relation to the mining exercise, I think that many people would agree with the following: it can be useful to systematically mine documents of public interest to make comparisons, report on the state of communities, and determine the impact of policies. If I add geographic locations and dates - since the plans are meant to be reviewed and updated routinely - it would possible to gain a sense change to local disposition. Word-mining is made possible through the existence of keywords (standardized vocabulary), which is perhaps more prevalent in governmental documents than other forms of written text. Emergency response plans represent a uniquely accessible resource for computers. In closing, if anyone has all of the emergency plans either posted online or indexed for rapid access, I would certainly be interested in a more thorough tabulation.