The following simulation is based on a presentation that I attended in the 1990s.  I was an investment junkie back then.  I sat down, and I listening to people speak about their ideas on making money - on television and sometimes live.  The presenter in this case was trying to explain that investment success is sometimes a matter of chance.  He had people in the audience stand up.  He asked them to guess heads or tails.  Those that were correct continued to the next round - to guess again - until everyone was wrong.  Near the end, there were a few people who had successfully guessed heads or tails many times in a row.  The simulation results are shown below for 1,000 participants.  I call them agents.  After the 8th toss or test, there was only one agent remaining.  And this agent continued to “guess” correctly right to the 12th toss.  This person therefore seemed to be doing something really right - perhaps through the use of ESP or a psychic connection, some might guess - although in reality it was pure chance. 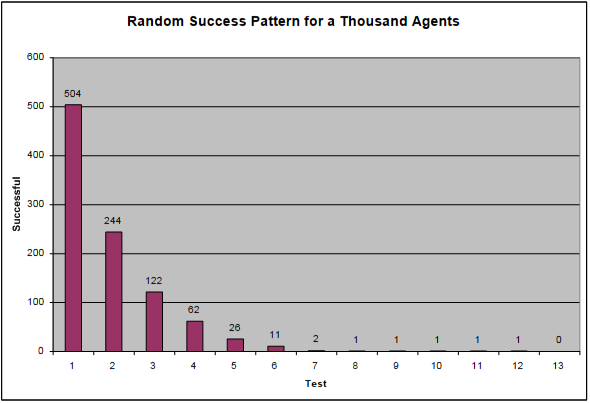 Based on the math, conceivably a company that is completely oblivious to safety and whose safety division might be staffed by cabbages could nonetheless successfully avoid environmental disaster - purely by chance.  So when a company claims that it has a “proven track record” in relation to anything - safety, performance, or earnings - it is important to keep such assertions in perspective.  It is the sort of observation that may have helped BP - the company responsible for the biggest oil spill in U.S. history - although I believe many companies need to learn the same lesson.  Sears and Toys R Us come to mind.  I suppose it would have been insulting during their heydays to say something like, “There was probably a bit luck involved in your success.”

A company can easily find itself following this line of thought:  “We are making money.  We are doing things right.”  Taking this assertion to its logical conclusion, a company is making money - until it is not making money - at which point it discovers that actually it was just lucky - and deep down inside it might not have the foggiest idea how to make money.  Consider the U.S. turning away from global neoliberalism under the Trump administration, premised on the reasonable belief that the U.S. cannot compete under a free-trade regime.  Arguably, Americans may have thought they were the most competitive people in the world - until they weren’t.  On that realization, there emerges a problem of dislocation.  People followed all sorts of beliefs and ideas more because of the “seduction” than the truth of the situation.

Having discussed the dynamics of the problem, it is time to consider how to deal with it in relation to the day-to-day data.  Very literally, the data might provide compelling evidence that everything is going perfectly fine.  “Things are looking up.  Everyone here is part of that success story.”  Until of course things start looking down; and everyone becomes part of the failure.  It is first necessary to distinguish at least from a conceptual standpoint the following: operations, positioning, and the market.  Some metrics pertain to market demand.  Other metrics are more related to how well the company is running (operations).  Then there is the question of whether the company is running in the right direction - its strategic positioning.

If a company is making money, this is not in itself compelling evidence that the company is operating well or that it has positioned itself in the most ideal manner.  However, because it is so tempting for an organization to assert its infallibility, there might be a dislocation or disconnect between operational metrics and the fortunes of the company.  In other words, the organization might strive to model itself towards a structure or form that serves no useful purpose from a business standpoint.  In fact, just the opposite might be true.  Organizations sometimes set themselves down a destructive path.  I think I used the term “tunnels” at one point in a blog.  These paths or tunnels manifest themselves as metrification schemes in the day-to-day operations of an organization.

What is a force that can cause sales to increase - giving the illusion of success - when further investigation might point to failure?  Many people understand the concept of “seasonal fluctuations.”  Sales might increase - as it tends to during the season - although this has little to do with operational improvement.  A competitor might go bankrupt - directing more of the market to the remaining players.  “That is because we did something right.  We aren’t Toys R Us Kids.”  Then the following year another competitor appears - retaking the market.  “Oh, I guess we were just lucky for awhile.  We don’t actually know how to improve our operations.”  Again, it is important not to confuse the market with operations.

The ontological separation of significance in data is critical in order to properly assess the benefits of change - such as initiatives to improve performance.  Some people have data that clearly distinguishes the market from aspect of operations.  Theoretically, a person can determine if operations are improving even if the market seems to be declining.  Conversely, this same individual could explain how the market is on the rise although there is still room for operational improvement - i.e. the company itself is not contributing to its success.  It just happens to be at the right place at the right time.  For me, there is always room for operational improvement.  I can’t imagine anyone saying differently - especially not somebody who works to achieve operational improvement.

I know sometimes when I am writing, things might seem kind of theoretical and difficult to apply to real-life situations.  Below I provide a chart of different metrics: “traffic” is most closely connected the market followed by “enquiries.”  I would say that both “orders” and “contracts” are more operational.  I am not suggesting the latter are strictly limited to operations - i.e. that they don’t connect to the real world at all.  I am saying that they strongly depend on operations.  For example, if clients enter the door to a retail outlet, but there is no staff inside (an extreme example) those entering the door clearly reflect the market.  The absence of staff - leading to an absence of sales - is operational.

On the chart, the company is getting more traffic, resulting in more enquiries, and yet the number of contracts is actually declining albeit rather gradually.  The business is operationally dysfunctional.  Those that read my blog on Technical Deconstruction probably appreciate that there are many directions to go in terms of ascertaining the nature and correcting the dysfunction. 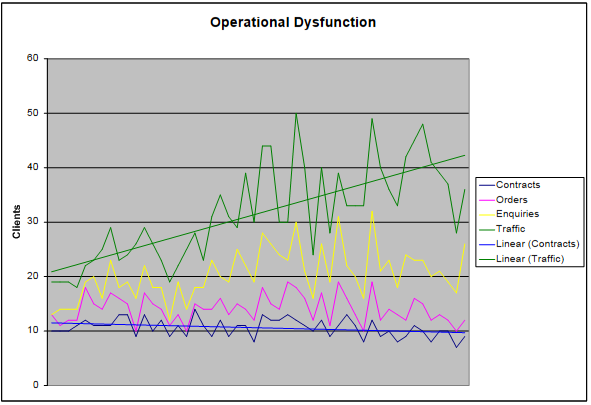 The more likely scenario for an organization facing increased market demand is to have more contracts.  The company then faces the troubling question of whether the increase is due to operational improvement or greater market demand.  If the increase is due to the market, the market unfortunately might decline at some point.  If the company failed to make operational improvements during the period of hospitable growth, it might not survive or be able to adapt when the market eventually declines.  Imagine how tempting it is to simply wallow in good fortune as if the good times will always be there.  “We are the chosen people.  We are put on this earth to make money.  We deserve to be where we are.  We are good people.  Good people succeed,” sort of thing.  I know that isn’t math.  That is something else that I call Social Reversion, which by the way I am studying but will not be posting about here.

I remember watching a documentary about a tribe where the people never planned for “bad times.”  They never stored food.  Literally they sometimes starved to death waiting for the weather to improve.  I am thinking that some of them turned to cannibalism rather than die - although I don’t recall this being part of the documentary.  The people of the tribe were completely dependent on external conditions.  Similarly, the disassociation between operations and the market can make an organization poorly equipped to deal with change.

In short, it is important to distinguish between metrics to ensure that operational improvements are real.  I would say that even compensation strategies - rewarding employees for their performance - should be premised on their actual contributions rather than for simply being at the right place at the right time.  This means that the day-to-day operations of an organization should be guided by data - more specifically, data providing guidance on different levels of operations.  At the same time, I appreciate that the apparatus that monitors operations is probably suited to follow how operations interact with the market.  Having responsibility for both means being able to distinguish between the two.  When the market starts to wane, operations have to be ready to push, pull, and fight to keep the business going: none of this is going to happen if it was held up by the illusion of its success.

It is true that success - as an actual direction - is subject to change.  Sometimes - or arguably most of the time at least from a day-to-day standpoint - the direction is not at question.  Rather, there are many valid concerns as to whether the metrics are genuinely helping to bring us to closer to success or providing guidance on how to management resources towards this end.

Another metrification regime for me exists in relation to the "supportive environment" - the idea that systems, processes, and resources can be designed to induce sales.  My favourite focal point in this area - having a degree in Critical Disability Studies - is accessibility.  I seek out metrics pointing to the attractiveness and functionality of resources that improve access.  This is part of a global movement.

A couple of points:

1.  Success may not be for the reasons one thinks it is, even if it's not by pure chance.

2.  Markets change, so what worked in the past might not work in the future.

In the end, business success is predicated on providing paying customers goods and services they are happy to buy for more than it costs one to provide them.  Firms that lose sight of this are looking for trouble and tend to find it soon enough.