Searching and Smelling by Objects to Find Profiles and Settings

A person will ordinarily search the contents of a database using matching keywords and tags.  Sophisticated databases might allow for filtering:  for example using NOT, AND, OR on a number of keyword strings such as both titles and product descriptions.  It is not normally possible to submit, say, a personality profile to a database - or a personality profile and a setting.  Searching for “serial murders subway terminals” might lead to event information about precisely this, apparent serial murders occurring in subway terminals.  There is no “personality” per se in a “setting.”  By setting I mean, for example, a “dimly lit underground enclosure” that might manifest itself as a “subway terminal.”  By personality, I might actually be looking for an “aggressive individual exhibiting pathological indifference to the needs of others.”  A database intended for general public use is naturally optimized for headlines and buzzwords.  For professional applications, I consider it worthwhile to have a database system that can respond to the submission of complex data objects.

I maintain three databases:  1) holding character data; 2) holding settings; and 3) holding narratives.  The narrative database actually contains all available data including characters and settings.  Therefore, if I want to find a particular character in a specific setting, I submit the code for these objects to the narrative database; and the database grades all of the cases.  This is not to say that the character and setting ever came together in real-life.  I might just want to find out what sort of stories “seem” to extend from a particular character and/or setting.  The narrative database contains additional data that the other databases don’t have.  It contains “circumstantial” data.  All of the circumstantial data is lumped together; and the likelihood of finding close matches is quite poor given the large number of circumstances likely associated with any storyline.

My databases interact with data objects through the use of “thematic openings.”  This is an interesting concept.  A thematic opening is like a listing of tags meant to mean something.  For example, “snowstorm,” “poor visibility,” “closed highways,” point to “mobility impairment”; this is assuming there isn’t a hierarchical structure that has to be taken into account.  A listing of thematic openings might be “mobility impairment,” “zombie attack,” “cannibalism,” “family dinner party.”  Maybe I am being a bit loose with my example.  The general purpose of thematic openings is to establish feel or atmosphere - or the exact expression I use is “to give scent.”  On the other hand, the submission of a data object leads to “thematic placements” - the odour being sought.  The program that I use to determine resemblance to odours is called Bloodhound.

Along with the idea of a thematic opening is the concept of thematic analogs and pathologs.  An analog as it pertains to themes is meant to add information that is possibly absent from the case in question.  For example, “employee stress” is not clearly connected to “marital problems.”  But if employee stress and marital problems exist in the same theme, the database cannot help but infer a possible connection.  In fact, if the theme is called “poor workplace performance,” the presence of employee stress “might” also mean that marital problems are involved.  An analog therefore represents an assertion outside the confines of the case.  A pathalog is an analog meant to reveal potential pathologies in the character that might not be indicated by the data available from the case itself.  In this way, especially on the absence of data, there is a framework to pursue “leads.”

Those unfamiliar with my “Animal Spirit Model” might not recognize the spreadsheet below; it contains both (N) normal and (P) pathological settings (indicated by the position of the “<” characters).  Although a character might not appear to have any pathological traits on the surface, the spirit object asserts potential connections.  Obviously, there should be conversation here on the validity of my pathologs.  I have to point out however that at least a conversation can take place.  The settings can be discussed and changed.  This isn’t frothy discourse but something directly influencing database search patterns.  I also want to emphasize how in most cases there might be an absence of “individual” data - particularly psychological test data - especially in relation to behaviours outside a controlled environment.  The patholog below is called “Maximale” - meant to draw connections between aggressive personalities and potential pathologies. 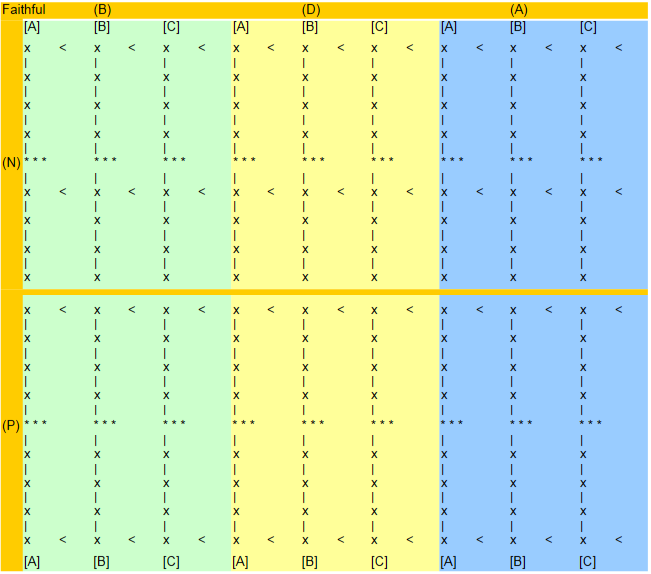 Next I provide an explanation - using some rather peculiar examples - of my conceptualization of pathologies.  The underlying data object is called “Melting Vulcan,” which registers in the areas of “I’m Peter Pan,” “If I blow hard enough,” and “Mirror Mirror.”  I constructed this data object from what information was available about Stephen Paddock - the Vegas shooter.  Pathology for me relates to the augmentation of reality through the insertion of fabricated reference points.  The closest common example that some of us might encounter in routine life relates to alcoholism.  I admit however that apart from the materials I reviewed during my graduate studies, I am no expert on alcoholism or pathologies for that matter.  I am however an authority on the construction of pathologs since I invented them.  Or at least maybe I invented them.  I'm sure readers will correct me.  I find that titles emerge on Google after I make my blog submissions.  At the moment, I'm not seeing any use of the term "pathalog." 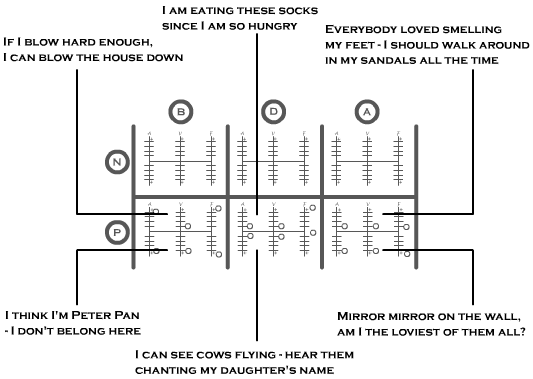 The flatness of themes ignores the fact that hierarchies might exist.  For example, in an assertion of “spontaneous,” the presence of a number of tags might not be enough to validate the resemblance.  The tags might have to be present in a certain way.  It is necessary therefore to maintain testable hierarchical constructs.  Again, although these constructs are debatable, at least I have a setting where they can be scrutinized and challenged.  Hierarchical constructs are important in relation to pathologs since there might be contradictions between intent, appearance of intent, and actions.  For instance, a person might be extremely forceful and yet be quite indifferent about the subject matter.  (A “normal” person is normally passionate about something he believes in.)  Or this individual might draw a lot of conclusions while exhibiting an inability to take the available information into account.  (A “normal” person tends to draw conclusions related to the information available - unless of course most his conclusions are socially constructed - in which case these aren’t conclusions at all but preconceptions.)

Using a conventional search engine to search by keywords is fine in most cases - I guess especially since it eliminates contentious arguments relating to psychological models.  However, the absence of debate does not bring a person any closer to the truth.  I believe that things withstanding the test of time tend to change with the times.  My database system is “model friendly.”  I fully expect to continue developing new models, applying them, testing their effectiveness.  Theory is fine.  Having the ability to sift through the data in order to test those theories is better.  I don’t believe that complex ideas can be tested without the ability to analyze sophisticated data objects.  Using quantitative analysis on its own hardly seems reasonable especially if the outcome is some kind of disassociated metric.  We have to “unplug” (unshackle) the analysis.  We need to embrace quotidian details of existence.