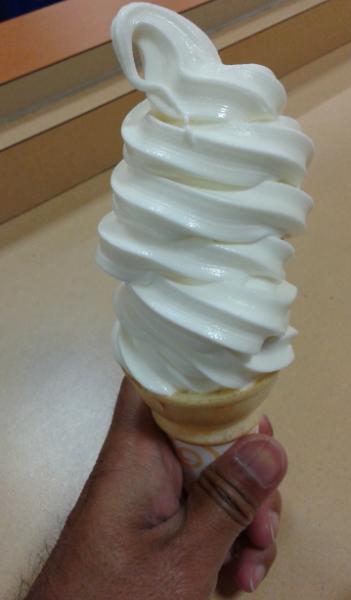 Phenomenalism is sometimes described as a type of reductionism. Information about a complex object might be reduced to simple sensory details. For example, ignoring the many interesting features of the ice cream cone displayed above, an individual could focus on its characteristics as food: cool, creamy, and sweet. However, as that ice cream is eaten, its impact on the senses might go further. "It calms me down. It makes me feel happy. I am a kid all over again." One might also say of certain foods, "It sure tastes like that ice cream cone." Or of that slightly full but happy feeling, regardless of whether a person has eaten ice cream, one might say, "My belly feels like I just ate an ice cream cone." Seems a bit far-fetched? Well, if somebody said, "It feels like I have ants running up and down my arm," there might not be ants in real life. People are allowed to use metaphors. "That's a pretty strong drink. It feels like I got hit by a school bus." This seems like a questionable statement since so few of us have actually been hit; yet within the social contexts that shape discourse, the analogy is probably reasonable.

There was a scene in The Simpsons where the German boy said, "I'm full of chocolate." One might interpret this literally since a cartoon character could conceivably be full of chocolate. But actually the statement is rather phenomenal in nature. I think that people understand such comments as clearly non-literal. My father once said of a little chubby boy, "It looks like he's full of siapao." He was referring to the Chinese or Filipino buns usually containing meat. I consider this observation humorous. However, if the little boy claims to feel like he is full of siapao (pronounced show-pow), there might be a medical condition to consider. Somebody recently shared with me, "It feels like there's an ice-pick jabbing my head right here." Few people have ever had their heads jabbed by ice-picks. Consequently, the person offering the description and the individual interpreting it rely on a shared mindset. I find all of this interesting in terms of meaning-retention and conveyance. "I feel like I'm being singled out and bullied," might not be a purely psychological statement. A person can "feel" bullied, victimized, and powerless.

One of the benefits of phenomenalism is how it allows for data-accumulation that might be fringe in nature. This takes a bit of explaining. If researchers study any common or repetitive phenomenon, there would likely be metrics already defining the sort of data should be collected. It is therefore possible to gather data in a purely quantitative manner. But this method of research is not entirely stable at the fringe. Whatever the fringe is, it might become the new normal if society shifts towards it. The public sometimes complains about adverse impacts of windfarms, electrical power lines, wi-fi, and cellular towers. These should be regarded as candidates of the fringe. Not really at the fringe anymore is radon gas, lead poisoning from paint, lead poisoning from water supplies, and carbon monoxide poisoning. If a person visits a doctor, it might be possible to test for the physiological impacts of these non-fringe incidents; sadly, there is probably still some disassociation between detection by the body and detection by a laboratory from samples.

At the fringe, the patient and the doctor likely lack common terms of references; and measurability is impaired. The patient however has an ontological framework within him- or herself. "There's this weird spinning sensation in my stomach." If this internal phenomenal description is dismissed, it becomes problematic when thousands of patients start arriving with similar complaints. "I feel like there's a top spinning inside me losing balance." At the fringe, the earliest signs of leakage of toxic substances might appear. What a doctor might do is retain the phenomenal description and alongside it if possible attach medical terminology. However, the true problem is, the contextual application of the data might be absent; thus the data system could be at a loss in terms of handing. When a disease is quite common, the context almost begets the ontology: "Have you had any pain around your kidney in this area?" In other words, the ontology is frequently externally defined or projected. When disease is evasive and not well understood, the articulation of phenomena begets ontology. The doctor might say, "Well, I don't know what to do with that information." True enough, but this doesn't mean that the information is useless or unhelpful. Absence of professional context does not reduce the legitimacy of the lived realities of people or the data extending from these realities.

Usually when people deal with a data-collecting arm of the government, there is a specific reason for the collection. A local police department cannot investigate every peculiar event in the community; and they certainly wouldn't record phenomenal details. If Chris Carter were to be believed, the FBI might investigate events perceived as paranormal. It would certainly seem suspicious if there is a sudden increase of complaints about memory loss or the inability to communicate. A foreign country might be experimenting with mind-control techniques; or there could be a discharge of industrial chemical with deleterious effects on certain segments of the population. The health-care ecology of a population is not necessarily designed to contain anything but the most contextually common types of data. Data-collection is sometimes about confirmation to determine the most logical course of treatment. In order to actually learn new things and be prepared for radical shifts, it is necessary to gather data along the fringe. I for one think that every community should have resident researchers to build up databases: peculiar events, the interaction of people with these events, and their sentiments and feelings. Because not everything that is useful or important necessarily justifies an incident response team. Similarly, some important medical developments might manifest itself and persist phenomenally within a social context.  Such researchers must have innovative data systems that can adapt to shifting contexts and ontological bases.