In non-linear data regression calculations, the “least square method” is applied for mathematical substitutions and transformations in a model, but the regression results may not always be correct, for which we have made improvement on the method adopted and named the improved one as “new square method”.

While investigating the correlation between variables (x,y), we get a series of paired data (x1,y1,x2,y2……xn,yn) through actual measurements. Plot these data on the x–y coordinates, then a scatter diagram as shown in Figure 1 will be obtained. It can be observed that the points are in the vicinity of a curve, whose fitted equation is set as the following Equation 1. 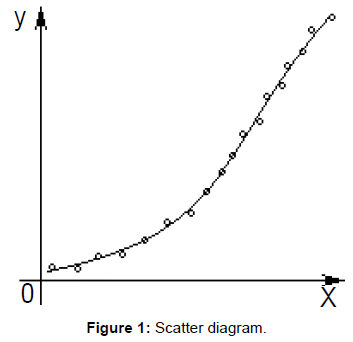 where a0, a1 and k indicate any real numbers.

To establish the fitted equation, the values of a0, a1 and k need to be determined via subtracting the calculated value y from the measured value yi, i.e., via (yi–y).

Then calculate the quadratic sum of m (yi–y) as shown in Equation 2.

Find the partial derivatives for a0, a1 and k respectively through function Φ so as to make the derivatives equal to zero: 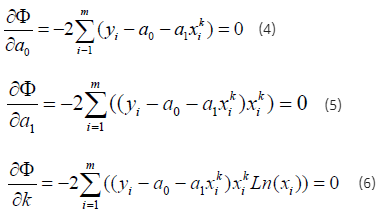 As for the regression of non-linear data with multi-factors in the “new square method”, the following Equation 9 can be utilized in computer programs for this purpose. This equation takes into account both the contribution of factors (x1,x2……xn) to the objective function (y) and the interplays among factors (x1,x2……xn) during the regression calculation, that is why the fitted models are of high correlation.

Note: Equation 9, which takes three-dimensional data as its example, can be applied for the regression of data in curved surface data.

You can download the full article (PDF version) here.

He does not need identity transformation and substitution. There is no analytic solution for the power value, so it can only be solved numerically by computer.

How does it compare to linear regression where the variables are transformed using a power transformation, or to polynomial regression?