New Perspective on the Central Limit Theorem and Statistical Testing

You won't learn this in textbooks, college classes, or data camps. Some of the material in this article is very advanced yet presented in simple English, with an Excel implementation for various statistical tests, and no arcane theory, jargon, or obscure theorems. It has a number of applications, in finance in particular. This article covers several topics under a unified approach, so it was not easy to find a title. In particular, we discuss:

The focus is on principles, methodology, and techniques applicable to, and useful in many applications. For those willing to do a deeper dive on these topics, many references are provided. This article, written as a tutorial, is accessible to professionals with elementary statistical knowledge, like stats 101. It is also written in a compact style, so that you can grasp all the material in hours rather than days. This simple article covers topics that you could learn in MIT, Stanford, Berkeley, Princeton or Harvard classes aimed at PhD students. Some is state-of-the-art research results published here for the first time, and made accessible to the data science of data engineer novice. I think mathematicians (being one myself) will also enjoy it. Yet, emphasis is on applications rather than theory.

Finally, we focus here on sums of random variables.  The next article will focus on mixtures rather than sums, providing more flexibility for modeling purposes, or to decompose a complex distribution in elementary components. In both cases, my approach is mostly non-parametric, and based on robust statistical techniques, capable of handling outliers without problems, and not subject to over-fitting.

Let us consider a weighted sum of n independent and identically distributed random variables, with finite variance and mean equal to zero:

When the weights are identical, the central limit theorem (CLT) states that this converges to a Gaussian distribution.  Regardless of the weights or n, we have:

When the weights a(k)'s are identical (corresponding to the standard CLT) then the factors p and q can be made arbitrarily close to any real  number (by choosing I and J appropriately) and thus the limit distribution satisfies the following property, presented here as a theorem:

If the weights a(k) are identical (classic CLT framework) then Z can be written as any linear combination pV + qW of tho independent random variables V and W that have the same exact distribution as Z (with same variance), provided that p^2 + q^2 = 1.

I won't spend much time on this paradox, but I invite you to think about it. There are other stable and semi-stable distributions, as we shall see in the next section. Generally speaking, they have a thick tail and infinite variance. The Gaussian one is the only one with a finite variance.

So clearly, we are here in a context where the assumptions of the CLT (central limit theorem) are violated, and the CLT does not apply. Let us introduce one additional notation:

With this notation, Z(n) can be re-written as

Depending on the weights a(k), the coefficient b(n,k) for any fixed k, may not depend on n, as n tends to infinity.

We shall consider, moving forward, decaying weights of the form a(k) = 1 / k^c, where c is a positive parameter in the interval [0.5, 1]. If c is less than or equal to 0.5, then we are back under the CLT conditions and Z has a Gaussian distribution, even if the kernel has a uniform distribution. If c is larger than 0.5, then we have the following:

Decaying weights have plenty of applications. For instance, I used a decaying weighted sum of nearest neighbor distances in a k-NN clustering problems, rather than the k-th nearest neighbor alone, to boost robustness. The resulting distribution of Z was rather special; the details are available in this article.

This topic is more advanced for statisticians, as it is based on the characteristic function of a statistical distribution. For physicists, mathematicians, signal processing experts, and engineers, it is not very advanced, in the sense that it is a simple application of the convolution theorem and Fourier transforms. I assume here that c = 1.

The characteristic function can be re-written as G(t)H(t), with

Written that way, Z appears as the sum of two independent random variables with characteristic functions respectively equal to H(t) and G(t). H(t) corresponds to the kernel distribution: uniform on [-1/2, 1/2]. As for G(t), you get a good approximation if you only use the first 20 factors (n = 20) in the above infinite product. Indeed, G(t) is not very much different from a constant function equal to 1, corresponding to a Dirac distribution when you take the inverse Fourier transform, especially when t is close to zero.

Note that we have:

See here for the above infinite product formula for the sine function. The asymptotic approximation on the right-hand side is based on the Taylor series for the sine function. This is what makes this representation particularly interesting, and beautiful. However, since Z and the kernel have the same variance, and since the sum of two independent random variables has a variance greater than or equal to that of each summand, the distribution attached to G (if it exists) must be improper. In other words, G may not be a characteristic function.

More about stable distributions and their applications

Stable distributions were once considered just a mathematical curiosity. Around 1960 researchers began to discover evidence of heavy tail fluctuations in financial data. This line of research led to the discovery of fractals. By now, stable models are firmly established in the area of finance. Stable distributions are also used in electrical engineering and hydrology. Applications in other areas of science are emerging rapidly, and the subject continues to gain momentum.

In this section, we investigate what happens when using decaying weights a(k) = 1 / k^c, with c = 1, and with uniform kernels on [-0.5, 0.5], as discussed in the previous section. The busy reader can jump to to the conclusion at the bottom. For the statistician, data scientist, or machine learning architect, I present simple, interesting statistical tests that were used during my analysis, to obtain my results and conclusions.

In our main test, we divided N = {1, ..., n} into two subsets I and J as follows: I contains the integers less than 20; and J the integers greater or equal to 20. We also tested other partitions of N, see tests for semi-stability, below. Here, n was set to 100. We sampled from 5 different distributions, generating m = 20,000 deviates for each one:

The testing was done in Excel. By construction, all these distributions have a theoretical mean and median equal to zero, and a variance equal to 1/12 (that's the variance of the kernel), as evidenced by the estimates in the table below. The number P.80 represents the 80th percentile. The number P.25 + P.75 is zero if the distribution is symmetric. This is the case in this example. 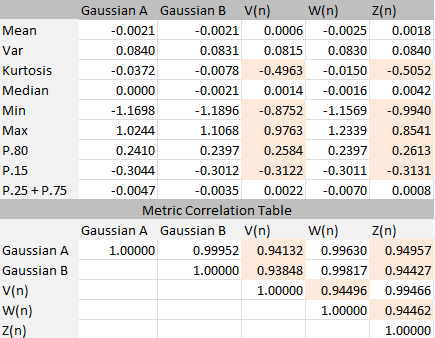 The sample size (m = 20,000) gives about two correct decimals in the table. The rule of thumb is that the precision is equal to about 1 / SQRT(m) except for Max and Min, which are always highly volatile. Clearly, the two Gaussian A and B look identical as expected, the distribution of V(n) and Z(n) look identical too though clearly non Gaussian, and the distribution of W(n) looks Gaussian. In fact it is not Gaussian, but close: the sample size is too small to pinpoint the difference. Likewise, V(n) and W(n) do not have the same exact distribution (almost) but the sample size is too small to pinpoint the difference. This framework actually serves as a great benchmark to assess the power of the statistical tests involved.

We also performed visual tests to measure the difference between pairs of percentile distributions, see figure below. All the Excel computations are available in this spreadsheet.

Testing for symmetry and dependence on kernel

Testing for unimodality and other peculiarities

All standard attractors investigated in the literature have a unimodal distribution. We haven't tested if Z is unimodal, but we believe it is, regardless of the kernel. To test if a distribution is unimodal, several tests have been devised: the bandwidth test, the dip test, the excess mass test, the MAP test, the mode existence test, the run test, the span test, and the saddle test. The dip test is available in R. Read more here. Some of these tests, in case of multimodality, can tell you how many modes (or clusters) are in your data sets.

Other potential tests, not discussed here, could be used to check if Z has an an unbounded support domain, or to check if its density is bounded. The answer is believed to be positive in both cases. An example of unbounded density is f(x) = 0.25 / SQRT(|x|) with x in [-1, 1]. We could also test for infinite mean or infinite variance (a feature all stable distributions have, except the Gaussian) however it is irrelevant here since by construction the mean is zero, and the variance is equal to the variance of the kernel.

Out of curiosity, we generated two independent samples of Z, say Z' and Z''. We checked whether Z and (Z' + Z'') / SQRT(2) had the same distribution, using the tests described in the above sub-section. It turns out that the two distributions are clearly different (they have the same mean and variance, but not the same kurtosis), thus Z is not semi-stable. In fact,(Z' + Z'') / SQRT(2) looks surprisingly close to a Gaussian distribution, while Z does not. This result is in contrast with what other authors wrote on the subject, 70 years ago, stating that any attractor must be semi-stable. The explanation is that these authors used different assumptions than ours, when analyzing converging weighted sums. Finally, note that (Z' + Z'') / SQRT(2) can not be Gaussian: if it was, both Z' and Z'' would have to be Gaussian too according to Cramer's theorem, and this is clearly not the case.

A better tool to decompose a potential attractor into an infinite collection of basic kernels, is a mixture model, rather than a weighted sum. In that case, any distribution can be an attractor. This will be discussed in my next article, and it has plenty of applications. [Update: this new article is now published here.]