This is a brief overview of my paper “Information Retrieval Performance Measurement Using Extrapolated Pr...,” which I’ll be presenting on June 8th at the DESI VI workshop at ICAIL 2015.  The paper provides a novel method for extrapolating a precision-recall point to a different level of recall, and advocates making performance comparisons by extrapolating results for all systems to the same level of recall if the systems cannot be evaluated at exactly the same recall.

Some IR systems generate a relevance score for each document, allowing the documents to be sorted so that the ones that are deemed most likely to be relevant appear at the top of the list.  A precision-recall curve can be generated for such systems by computing the precision and recall for each possible point in the sorted list, viewing the documents above that point as being the retrieved documents.  Unfortunately, we sometimes need to compare performance of IR systems without knowing the entire precision-recall curve.  For example, some systems only provide a binary yes/no relevance prediction instead of a relevance score, so we have only a single precision-recall point for such systems.

Making judgments about the relative performance of two IR systems knowing only a single precision-recall point for each system is problematic—if one system has higher recall but lower precision for a particular task, is it the better system for that task?

There are various performance measures like the F1 score that combine precision and recall into a single number to allow performance comparisons:

The value of the F1 score will be between R and P, and it tends to be closer to the smaller of the two, so it is impossibly to get a large F1 if either the precision or the recall is small.

Unfortunately, such measures often assume a trade-off between precision and recall that is not appropriate for the actual information need (I’ve written about problems with the  F1 score before).  To understand the problem, it is useful to look at how F1 varies as a function of the recall where it is measured.  Here are two precision-recall curves, with the one on the left being for an easy categorization task and the one on the right being for a hard task, with the F1 score corresponding to each point on the precision-recall curve superimposed:

If we pick a single point from the precision-recall curve and compute the value of F1 for that point, the resulting F1 is very sensitive to the precision-recall point we choose.  F1 is maximized at 46% recall in the graph on the right, which means that the trade-off between precision and recall that F1 deems to be reasonable implies that it is not worthwhile to retrieve more than 46% of the relevant documents for that task because precision suffers too much when you push to higher recall (i.e., when you go farther down the list of documents sorted by relevance score to find additional relevant documents you encounter too many non-relevant ones).  That is simply not compatible with the information need in some situations.

For example, a litigant can request that its opposition or a third party be compelled by the court to produce documents that satisfy some relevance criteria so that evidence that may resolve the dispute can be discovered. When electronic documents are involved this process is called e-discovery.  High recall (e.g., 75% or more) is required to satisfy the court.  High precision is desirable to reduce the number of non-relevant documents that will undergo expensive human review before the documents are turned over to the requesting party.  When determining the recall that is necessary the court will take cost into account, but it does so in light of the value of the case and the likelihood that e-discovery will turn up useful evidence—this is called "proportionality."  The F1 score cannot possibly strike the right balance between recall and precision because it is completely oblivious to the value of the case.  Other problems with the F1 score are detailed in the paper. 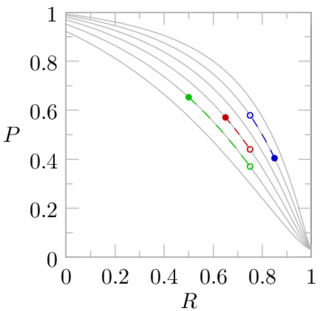 Finally, here is what the performance measure looks like if we evaluate it for each point in the two precision-recall curves from the first figure:

The blue performance curves are much flatter than the red F1 curves from the first figure, so the value is much less sensitive to the recall level where it is measured.  As an added bonus, the measure is an extrapolated estimate of the precision that the system would achieve at 75% recall, so it is inversely proportional to the cost of the human document review needed (excluding training and testing) to reach 75% recall.

For more details, including the mathematical model used for the idealized precision-recall curves and some examples of how well the extrapolation works, read the paper.