In pattern recognition, the K-Nearest Neighbor algorithm (KNN) is a method for classifying objects based on the closest training examples in the feature space.  KNN is a type of instance-based learning, or lazy learning where the function is only approximated locally and all computation is deferred until classification.  The KNN algorithm is amongst the simplest of all machine learning algorithms: an object is classified by a majority vote of its neighbors, with the object being assigned to the class most common amongst its k nearest neighbors (k is a positive integer, typically small).  If k = 1, then the object is simply assigned to the class of its nearest neighbor [Source: Wikipedia].
In today's post, we explore the application of KNN to an automobile manufacturer that has developed prototypes for two new vehicles, a car and a truck.  Before introducing the new models into its range, the manufacturer wants to determine which of the existing models in the marketplace are most like the prototypes.  In order words, which of the existing vehicles in the market place are the "nearest neighbors" to the prototypes and therefore which vehicles are the prototypes most likely to compete against.  Needless to say, this information would be a crucial input to the marketing strategy of these two prototypes.
As always, we first start with the data which is as follows:

As can be seen, this data file contains 16 fields (variables) and 159 records.  The variables include information like type (0 = sedan; 1 = truck), price (sale price in thousands), engine size, horsepower, mpg, etc.  The last two rows (158 and 159) in the data file refer to the prototypes developed by the manufacturer:

The last field (or column or variable) in the data file is called "Partition".  This field has values of "0" for all records in the data file except the last two rows.  This serves as a "flag" field so that we only consider the existing automobiles in the marketplace as inputs in our analysis (since we want to classify our prototypes, it does make sense to treat them as inputs in our analysis).
We will use SPSS Modeler v 15 for our analysis.  To get started, we attach a Type node to the data file.  Since we want to classify our prototypes based on features, we treat all fields from "Price" through "Mpg" as inputs in our analysis.  We also treat the "Partition" field as an input for the reason discussed above.  All other fields are treated as "None".  The completed type node, appears as follows: Next, we attach a KNN Modeling node to the Type node and choose the following options:
1) Only identify the nearest neighbors Upon executing the node, we obtain the following results: 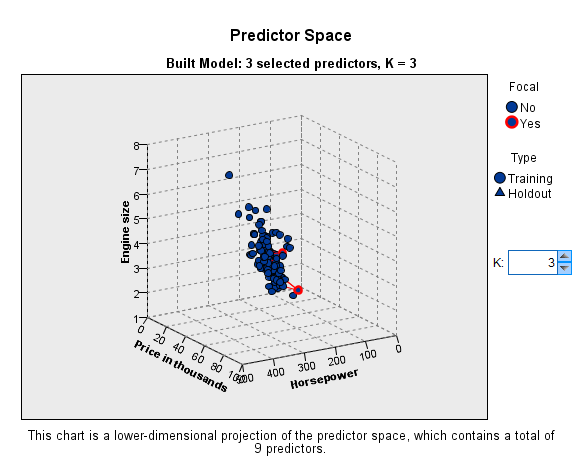 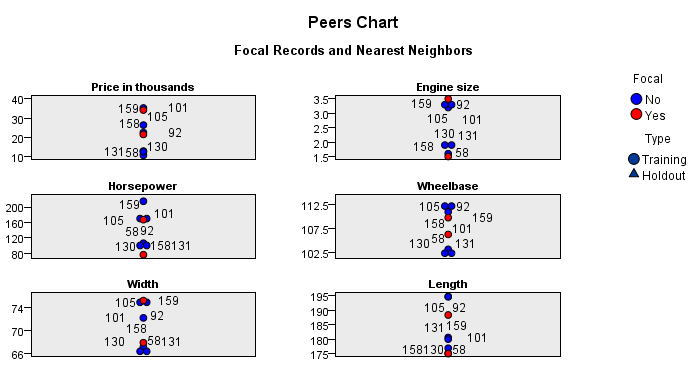 From this chart, we can tell that one of our prototypes has the lowest engine size (158) whereas our other prototype (159) has the largest engine size when compared to the existing automobiles in the marketplace.  Similar conclusions can be drawn on reviewing the other six inputs.  For example, 158 has the lowest horsepower and 159 has the largest width.
Next we review the k Nearest Neighbors and Distances chart: 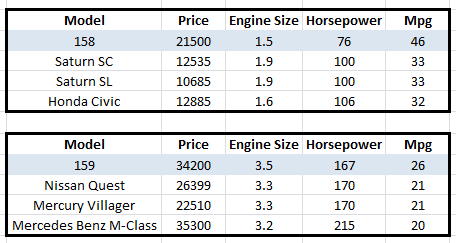