Decision Trees are commonly used in data mining with the objective of creating a model that predicts the value of a target (or dependent variable) based on the values of several input (or independent variables).  In today's post, we discuss the CART decision tree methodology.  The CART or Classification & Regression Trees methodology was introduced in 1984 by Leo Breiman, Jerome Friedman, Richard Olshen and Charles Stone as an umbrella term to refer to the following types of decision trees:

The CART algorithm is structured as a sequence of questions, the answers to which determine what the next question, if any should be.  The result of these questions is a tree like structure where the ends are terminal nodes at which point there are no more questions.  A simple example of a decision tree is as follows [Source: Wikipedia]: 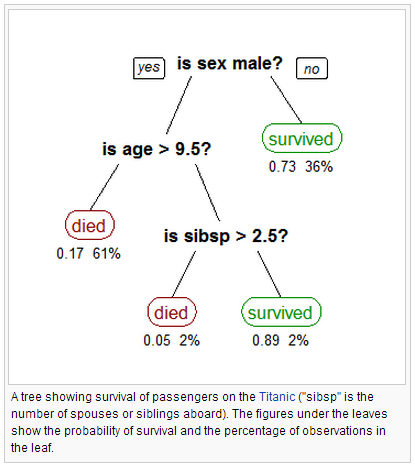 The main elements of CART (and any decision tree algorithm) are:
In order to understand this better, let us consider the Iris dataset (source: UC-Irvine Machine Learning Repository http://archive.ics.uci.edu/ml/).  The dataset consists of 5 variables and 151 records as shown below: 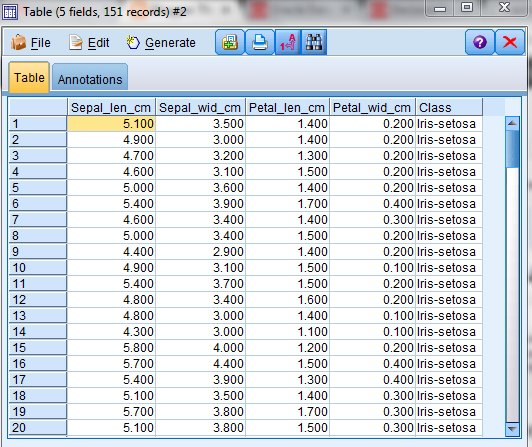 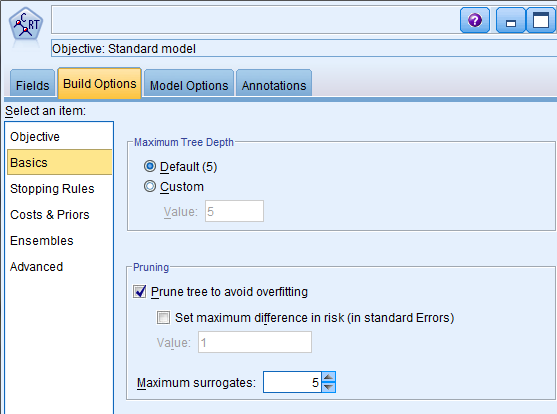 On this screen, we pick the maximum tree depth, which is the most number of "levels" we want in the decision tree.  We also choose the option of "Pruning" the tree which is used to avoid over-fitting.  More about pruning in a different blog post. 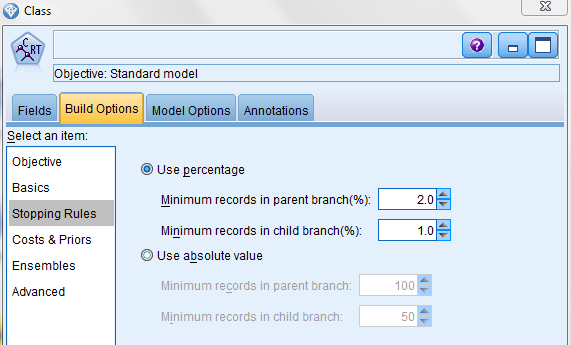 On this screen, we choose stopping rules, which determine when further splitting of a node stops or when further splitting is not possible.  In addition to maximum tree depth discussed above, stopping rules typically include reaching a certain minimum number of cases in a node, reaching a maximum number of nodes in the tree, etc.  Conditions under which further splitting is impossible include when [Source: Handbook of Statistical Analysis and Data Mining Applications by Nisbet et al]:
Next we run the CART node and examine the results.  We first look at Predictor Importance, which represents the most important variables used in splitting the tree: 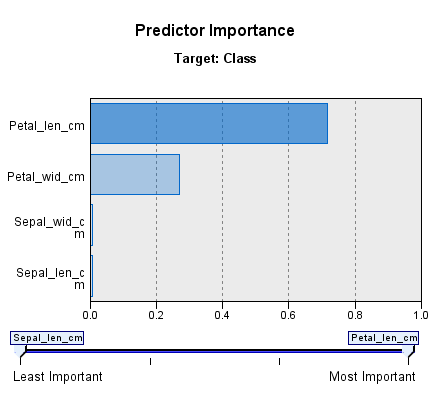 From the chart above, we note that the most important predictor (by a long distance) is the length of the Petal followed by the width of the Petal.
A scatter plot of the data by plotting Petal length by Petal width also reflects the predictor importance: 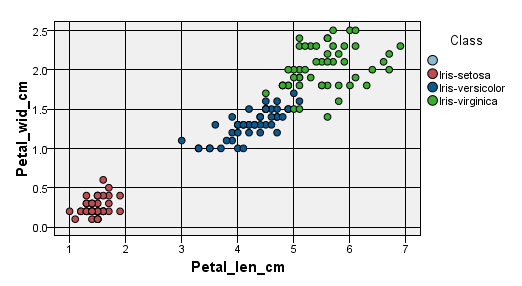 This should also be reflected in the decision tree generated by the CART.  Let us examine this next: 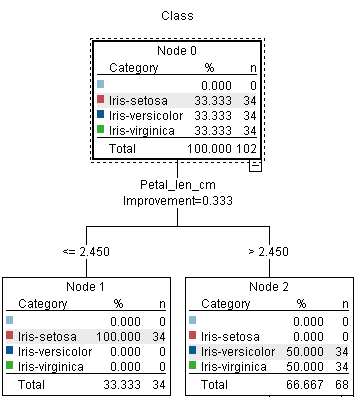 As can be seen, the first node is split based on our most important predictor, the length of the Petal.  The question posed is "Is the length of the petal greater than 2.45 cms?".  If not, then the class in which the Iris falls is "setosa".  If yes, then the class could be either "versicolor" or "virginica".  Since we have completely classified "setosa" in Node 1, that becomes a terminal node and no additional questions are posed there.  However, we still need to Node 2 still needs to be broken down to separate out "versicolor" and "virginica". Therefore, the next question needs to be posed which is based on our second most important predictor, the width of the Petal. 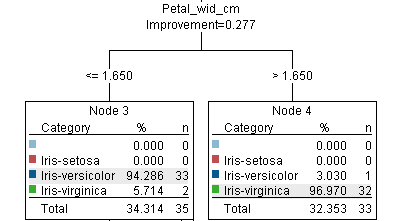 As expected, in this case, the question relates to the width of the Petal.  From the nodes, we can see that by asking the second question, the decision tree has almost completely split the data separately into "versicolor" and "virginica".  We can continue splitting them further until there is no overlap between classes in each node; however, for the purposes of this post, we will stop our decision tree here.  We attach an Analysis node to see the overall accuracy of our predictions: 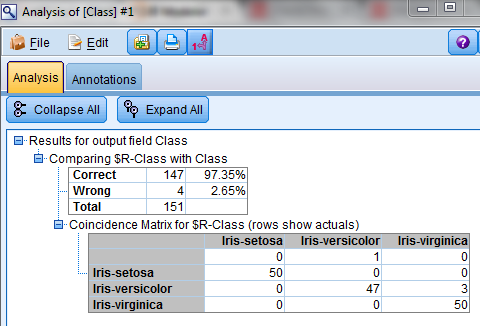 From the analysis, we can see that the CART algorithm has classified "setosa" and "virginica" accurately in all cases and accurately classified "versicolor" in 47 of the 50 cases giving us an overall accuracy of 97.35%.
Some useful features and advantages of CART [adapted from: Handbook of Statistical Analysis and Data Mining Applications by Nisbet et al]: