Hadoop Market to Grow 55% due to Big Data Analytics

New market analysis report, examining the global Hadoop market. The report is titled ‘Global Hadoop Market - Industry Analysis, Size, Share, Growth, Trends, and Forecast, 2012 - 2018’ and examines the various product types, applications, regional segments, and major players of the global Hadoop market. Forecasts for each segment are prepared using analytical tools such as market attractiveness analysis and Porter’s five forces analysis and are presented for the stated forecast period.TMR analysts have zeroed in upon the ever-increasing amount of data generated in today’s digital world as the prime growth driver for the global Hadoop market. “The amount and variety of digital data generated on the Internet every day is mindboggling,” stated TMR’s lead analyst. “The large amount of information on the Web presents a lucrative for many companies to gather the relevant data, but their major roadblock in that aim is a lack of a competent software that can corral and collate structured as well as unstructured data. Hadoop fulfills that need perfectly.”Due to this growing demand, the global Hadoop market is expected to exhibit growth at a stunning 54.7% CAGR from 2012 to 2018 and be valued at US$20 billion by 2018. The market was worth US$1.5 billion in 2011. 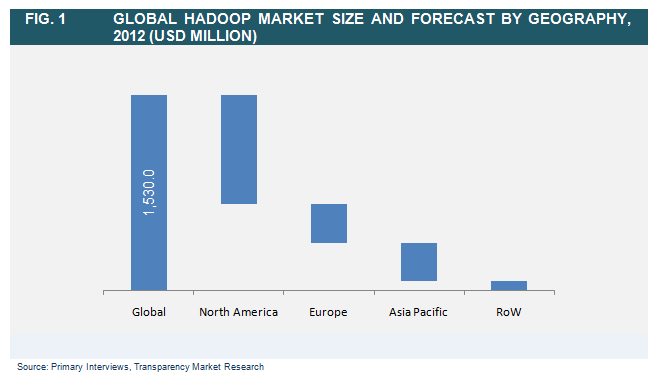 Big data analytics are increasingly in demand to handle the data generated on the Web. Of the several options on the market that perform this function, Hadoop is the most cost- and time-efficient. This has led to high demand from the global Hadoop market. Hadoop also has the scope to fill the gap between database management and managers, making the process more streamlined and aiding the company’s functional efficiency.On the flip side, the major restraint faced by the global Hadoop market is a lack of trained personnel to man large-scale Hadoop operations and lack of widespread Hadoop infrastructure to support its usage across the world. These teething problems are inevitable for any new technology and the report also presents viable solutions to overcoming these issues.

Mergers and acquisitions in the Hadoop market, in addition to other collaborations, can significantly increase the reach of the global Hadoop market and are thus the focus of several large companies operating in the Hadoop market. Another aspect common to most if not all major Hadoop enterprises is a strong focus on the emerging Asian and Latin American markets for Hadoop. These regions are becoming increasingly prominent in the global Internet scenario and the success of Hadoop enterprises in tapping the opportunity in these markets will largely determine the trajectory of the global Hadoop market in the forecast period.

North America and Europe, accordingly, are the two largest regional segments of the global Hadoop market at present, due to the strong technological support to the incorporation of Hadoop in these developed regions.The global Hadoop market is divided into Hadoop software, hardware, and services by product type, and into BFSI, retail, manufacturing, telecom, media and entertainment, healthcare, natural resources, IT, government, and trade and transportation by application. Market forecasts for each of these segments are given in the report, providing a 360-degree view of the global Hadoop market.

The report can be seen here.