The purpose of this article is to let Google aware of the problem, and fix their Google Analytics reports (filtering out the fake traffic). This scheme also impacts many companies computing website rankings. Tons of websites now have their traffic stats wrong, and should consider using home-made solutions, to filter out fake traffic undetected by vendors.

The following is an updated analysis as of October 22. 2014 at 11 pm PST, as the pattern has evolved since yesterday.

Here's the fingerprint, to detect this bogus traffic:

Evidently, these patterns will change over time. 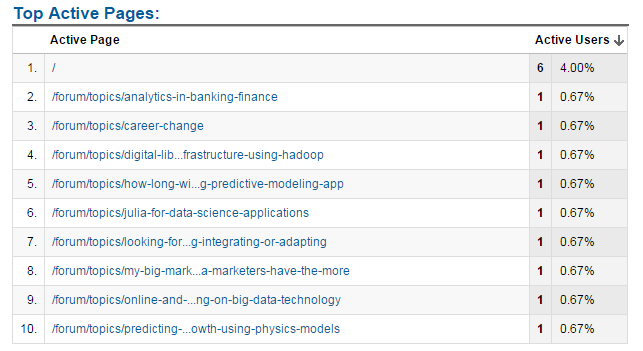 What are they trying to achieve?

The scheme is (for now at least) extremely easy to detect. It will take a few days (my guess: less than one week, let's see) before Google and other companies find a fix.

Showing artificial traffic (robot) in a separate box or tab. I guess robot traffic is filtered out by Google, based on empirical evidence (see section 3 after clicking on the link), but it would be useful if Google Analytics reports this automated traffic separately. Note that the bot in question triggered the Google Analytics JavaScript tracking code, quite unusual, but nevertheless this bot was easy to detect, and should not have been counted in normal traffic. Empirical evidence suggests that this bot and other bots also inflate traffic stats from other websites, based on measurements from various web traffic measurement companies.

This is so interesting.

We are now on day #7, and the same fake traffic with Netscape user agent is showing up again in Google Analytics. We are going to look for a more accurate web analytics vendor, or maybe an home-made solution. This bot is so easy to detect, I don't understand why it is not filtered out.

This is now day #3 with the fake traffic. Still undetected by Google (though I'm going to contact them). I thought it would take less than one week for Google to fix its Google Analytics reports. Still 4 days to go before I lose my bet. By the way, the fake traffic started much earlier today (around 3 pm PST on 10/23) and later in the evening it moved from Spokane WA, to Ashburn, VA - where tons of Amazon EC2 servers are located. Also found originating from Boardman, OR.

If it's that easy to manufacture fake traffic (that is not detected by traditional filters), I guess we are going to see a lot more of this, and web traffic statistics will become meaningless. For those interested, the user agent generating this traffic is Netscape 4.5.

This is an example of metric corruption - a general class of nefarious actions aimed at making your KPIs show wrong values, usually for financial gain or competitive advantage. Another example of metric corruption is when a business hacker creates fake traffic to make your Google ads have a low engagement rate, to kick you out of AdWords, or make it far more expensive for you to stay on - draining your advertising budget. We tested it successfully a while back in our data science research lab. Similar techniques can be used to indirectly erase organic search results from Google's keyword-webpage value pair index.