How might a person go about studying something elusive like serial murder or terrorism?  I have no formal exposure in this area.  Much of the technology that I mention in this blog is meant for another purpose.  That other purpose is to study characters in movies, which for me is a great diversion.  In particular, I like to map out where certain characters might be found (or lost - i.e. missing characters): the settings they occupy, their roles, their relationships.  It goes without saying that an individual planning an act of terror is still a person.  The director of a movie is also a person.  It is reasonable therefore that their deliberations progress towards storylines that share some similarities.  I guess the main difference is that writers and directors might place additional emphasis on certain aspects of the story - e.g. its marketability and entertainment value.  I should mention that if enough information exists I also add real-life stories to my database.  I assume the role of the director or storyteller.

The problem with a Paddock-like character as I am certain many would agree is lack of details.  It is difficult to analyze anyone on the absence of data.  Nonetheless, I can do my best to construct a personality profile.  It doesn’t have to be entirely correct.  My objective is simply to demonstrate “how” to study such a person.  Ideally, as per the image below, I would already have security experience and a database of personality profiles combined with circumstantial data.  I already admitted that my experience in this area is mostly from watching movies; and I essentially maintain a database of movies.  This admission does not negate the usefulness of the methodology, which I explained can be and has been applied to real life characters.  Paddock by the way is the Vegas shooter who killed, the last I heard, 58 concert goers from a nearby hotel room high above the scene of carnage. 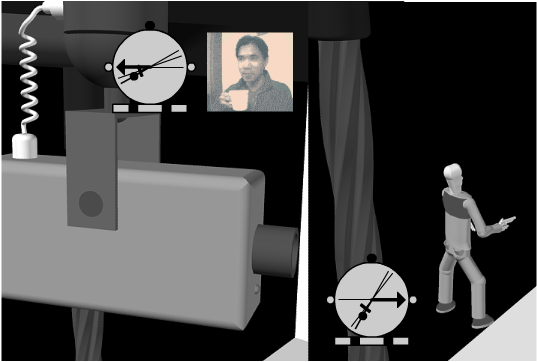 The first order of business for me is always conceptual.  What is a person’s “personality” - that is to say, what is “personality?”  My conceptualization is not necessarily any better than the next person.  I developed a grid to help me make sense of a person’s thinking process.  I call it my “Animal Spirit Model.”  This might be my fourth or fifth model designed to characterize aspects of a person’s involvement in a narrative.  It represents a big investment in computer processing resources since each character in a story can have an animal spirit - if I wanted to take the trouble of creating one for each person.  Below I present the animal spirit that I designed for Paddock the Vegas shooter.  I call his animal spirit the “melting Vulcan.”  It is generally meant for a person trying to hide a breakdown.  The identity isn’t just about to fall apart; but it already has fallen, and it is continuing to operate broken.  He is unstable but not apparently so and not in every aspect of engagement - thereby explaining the success of his concealment. 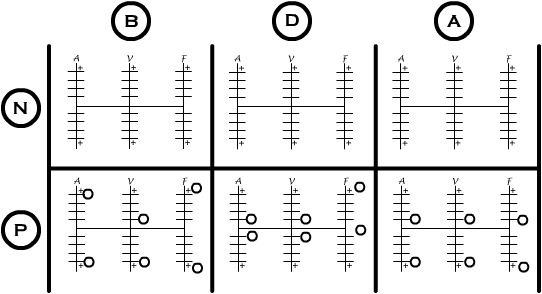 After conceptualization, I would say that the next major chore is developing the codification system.  Each location a circle can appear on the image above should trigger a code on the table below.  At the end of the codification process, I would have a series of codes relating to Paddock’s personality.  This coded series represents his profile, which could then be added to his storyline along with other characters such as his girlfriend.  Of course, the public has even less information about Paddock’s girlfriend. 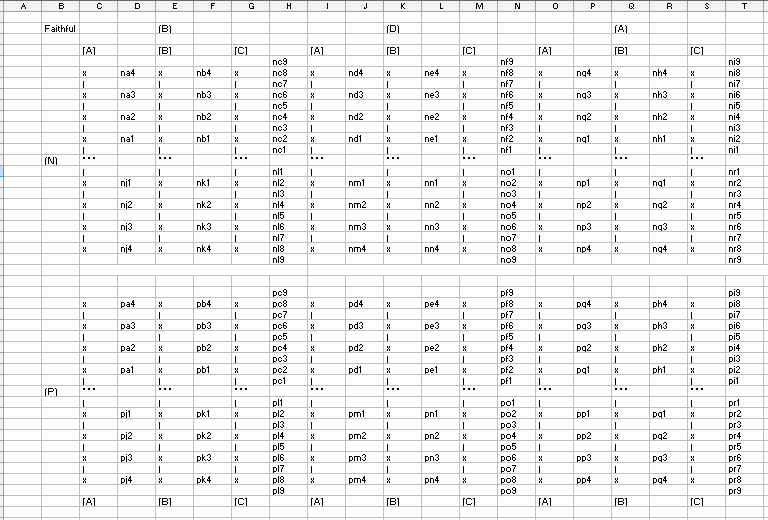 My personality profile for Paddock might be compared to Jack Nicholson’s character in “The Shining” (1980 Warner Bros.), which per my model elements is about 77 percent similar.  Apart from the question of his psychological stability, this character is made interesting by his commitment to conceal mental collapse even from his immediate family.  It hardly matters what information the outside world has to offer him; he invariably takes action based on his fabrication.  Below I show the settings from the conceptual grid entered on the codification table.  Since I didn’t want to spend a lot of time on an elaborate data-entry screen, I simply used Excel.  The Shining is an excellent horror movie.  It’s like the main character never knew his own identity.  It reminds me of a scene from Battlestar Galactica when some characters came to realize that they are Cylon.  Imagine becoming aware of one’s destiny as a mass murderer. Notice above that instead of codes, I now use the “<” character to indicate placement on the grid.  Now I can create all sorts of characters without having to recall any code.  I apologize how difficult it must be to see the fine details on this Excel sheet.  Once the character details are set, I run the program to convert the table into code.  I call this program “Hollister Spy.”  The resulting code for the animal spirit that I designed for Paddock is shown below.  Don’t be alarmed that the code makes no sense.  It is meant to be interpreted by a computer rather than a person.

What should a person do with this code?  Myself, since I have a database, I would attempt to determine what scenes this personality (not the person but his personality) has occupied in past cases.  Then I would try to confirm whether the scene of the current case (of the person) has any similarities.  I have data stored as codified narrative, which allows for the comparison of storylines.  I guess in a physical sense, it is impossible to “smell a mass murderer.”  But perhaps it is possible to “smell the data” pointing to a mass murderer.  (Read my blog on the “Odour of Data” for more details.)

In Stanley Kubric’s film - and I apologize for not having read Stephen King’s book - the main character Jack Torrance is an aspiring writer, a bit of an outcast even in his own family, responsible to taking care of a large empty hotel.  He converses with ghosts.  Isolation is big theme along with separation of the family as a cohesive body.  This of course is quite different from Paddock being alone in a large hotel in Vegas.  But perhaps there is some value in the narrative here in relation to the psychological instability, isolation, alienation, and separation.  In a way, Torrance was already dead.  Literally he was on a photograph of people long dead; this gives rise to the idea that he didn’t have full control over his fate and his role in it.  Perhaps in certain respects, Paddock was also already dead - as soon as he came up with his plan.  (If the likelihood of escape was high, he wouldn’t have had so many guns.)  But perhaps he was dead even en route.  I kind of wonder sometimes if people ask themselves whether they are meant to be alive.  They look for signs.  Perhaps he couldn’t find any compelling evidence.

I consider the use of narrative powerful in these situations.  I want to point out however that there will always be gaping holes in the data since any narrative tends to be sketchy.  I refer to the animal spirit as the “alignment” of a person in the Suspense Analog data object.  It is important to have a means to preserve the “living character” - particularly if he isn’t dead - in order to examine potential suspects going forward.  Use of the data object is one such approach - fixating not merely its animal spirit but also its sense of effort and opportunity in particular situations.

Having completed the blog, I will now set aside the specific application of studying real-life murderers.  It is simply not possible to develop a database without data.  (A personality profile cannot be confirmed without data.)  I will still attempt to use the profiling tool for other purposes, of course.  I am thinking of becoming a “movie character consultant” maybe when I retire.  I have written in the past about the abundance of narrative code in movies.  This will give me an excuse to sit back and enjoy more films.  I wouldn’t underestimate the value of being able to tap into the brilliant storytelling of writers and directors.  I expect the animal spirit will enhance my ability to systematically analyze the characters in films.