Canada will soon be passing legislation to allow for physician-assisted suicide.  Sometime over the course of debate between our Parliament and Senate, I found what at the time seemed like a peculiar pattern of woodchips in the back of my pick-up.  It was such an interesting image, I thought I would share it here.  On closer inspection, I discovered that in fact I was looking at hundreds of tiny flower shafts and seeds. 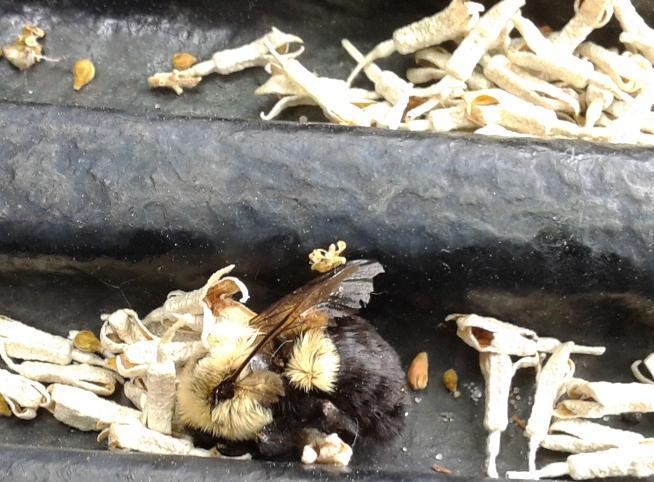 Then I noticed what appeared to be the largest bee I had ever seen in my entire life curled up like a ball among the shafts - albeit motionless and apparently quite dead.  I realize that this isn't a great image to share online.  But there is no reason to think that it died of anything but natural causes.  Some images posted online of "unidentified human remains" (in the hopes of public identification) are considerably more gruesome.  It was such a huge bee that I found it necessary to write something about it perhaps as a kind of tribute.  But this is a blog dedicated to data science.  I asked myself, how can I possibly pull off a connection?  Then it dawned on me that perhaps this bee is not merely the flailing arms of happenstance; rather, it is a sign that I should write about collecting codified narrative for those people that have chosen to accept physician-assisted death.  But first, I need to take revisit my Universal Data Model that I introduced in a blog way back in March of 2015. I find it a bit funny how I have lost all sense of linearity due to the number of blogs I have posted.  I sometimes can't tell precisely what I mentioned in past blogs.  Then I operate on the assumption that I mentioned certain materials that perhaps I never did.  All that said, I certainly introduced the above model in a few past blogs.  Because of the shape of the UDM as it is presented above, I also call this the "Exclamation Model."  Basically the model suggests that alienation becomes more likely as situations become more complex.  Seems like a reasonable assertion, right?  I have never explained the exact mechanics.  At this time, I will tip over the UDM so it rests on its side.  The resulting image is shown below.  Now, the point I will soon be raising is kind of complicated for me specifically to explain.  I will be using end-of-life narrative as a case to clarify the model. 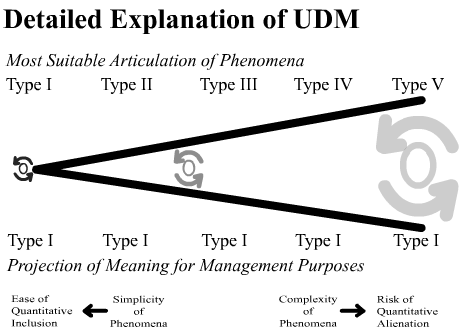 There are different ways to express the reality of something.  The method probably most familiar to data scientists is the quantitative approach; for the sake of simplicity, I will portray the use of quantities as "Type I" on the chart.  Business is built around numbers.  So it wouldn't be unusual to expect management to be focused on numbers.  It is necessary to distinguish between expression of phenomena using data (articulation) and its interpretation (projection).  Some level of alienation already occurs in business settings:  quantitative data involving clients might convey only certain aspects of reality, likely the most quantifiable aspects.  But alienation is less likely even when interpretation is highly quantitative if the underlying reality being expressed is likewise quantitative.

Imagine for a moment sending an accountant to perhaps take a public record of a person who has chosen to end his or her own life through physician assisted death.  If the ensuing conversation is about accounts, this accountant probably well suited for the task.  (I don't want to confuse matters in this blog, but information about accounts is more like Type II articulation.  It is still possible to alienate the data for example if managers enter a conference room and start talking about stats and aggregates; but the level of alienation is fairly subdued.)  On the other hand, if the conversation is about the person - not the person's accounts - the resulting interpretable data would be highly inaccurate and misrepresentative of the underlying reality.  Alienation of the "data" is assured.  From the alienation of the data, we alienate the person.  Simple quantitative interpretable data in a situation that is quite complex contributes to a senseless objectification of underlying phenomena.

However, data doesn't merely have to be quantitative to be alienating.  "Sir, I have been asked by Statistics Canada to take a public record of these end-of-life proceedings.  I need to know the following about you:  age, income level, ethnicity, languages spoken, education . . . ."  Some attempt might be made to humanize the questioning:  "favourite colour, music, food, fashion, books . . . ."  This is not to say that books or anything else might not be a useful to break the ice.  "Type V" articulation on the chart is for "self-narration":  the person provides his or her own narrative.  It is rather autobiographical.  So it wouldn't necessarily be an accountant or statistician being sent to the bedside of the person who has chosen to die; this is because the exact nature of the conversation is completely open.  The individual might choose to speak about his or her childhood experiences; challenges of raising a family; difficulties of coping with disease.  Codified narrative allows this person about to die the opportunity to shape his or her own story rather than being defined or predefined by the questioner.

Why might a government want to collect "codified narrative" - the type of narrative data that I have been collecting?  Well, each person is a treasure.  It is terrible for a nation to lose its assets.  The individual might have a lot of interesting things to say.  So we should certainly collect the data.  In terms of why the data should be in the form of codified narrative, it is for the sake of future accessibility.  I have nothing against the use of books including electronic books.  Some data scientists might analyze text entirely by the numbers.  Now at the end of the blog, why might I have an issue with Type I conveyance of Type V articulation?  It is alienating.  Before the state allows for the termination of life, a person will likely generate all sorts of data pertaining to mental and physical health and administrative compliance.  But all of that data leads to objectification.  Arguably, each time a person feels compelled to leave society, the state has failed in its quest to construct a better society.  The narrative here isn't just about the person dying.  It is about society itself.  To collect data but know nothing about the people that brought about the data has led to a pervasive form of alienation in society.  So it's not enough to accept the superficial and easily quantifiable.  It is not enough for people to exist as statistics - and for their termination to appear only as more statistics.