Links must be from DataScienceCentral.com, BigDataNews.com or AnalyticBridge.com. It can be your own featured blog posts that you published on our network, or any article, resource or forum question that you like on our network.

1. How to participate and win?

Each month, $250 will be offered to one of the posters, randomly selected. The winner will be announced and featured on DSC. Posting two rather than one link doubles your chance of winning. To tweet a link, you can use (for instance) bit.ly to shorten the URL. Your tweet should consist of the article title (or your comment about the article), the shortened URL, and the hash tag #abdsc (the abbreviation for analytic bridge data science central). 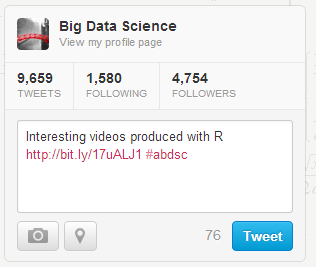 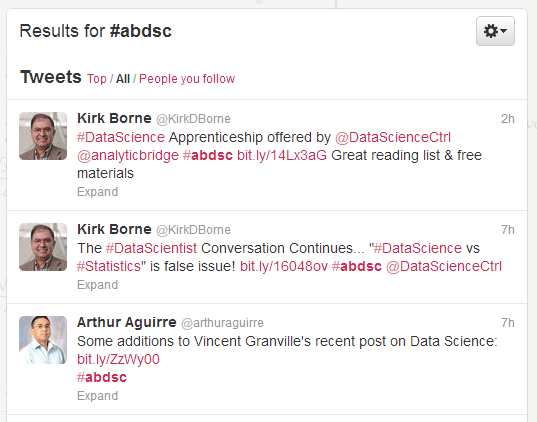 We will heavily promote the #abdsc Twitter page. So having tweets with the #abdsc hash tag will drive traffic to your Twitter profile and your other tweets. A great way to gain visibility, whether you win or not! In addition, we will mark your tweets as "Favorites", and we we follow you on Twitter.

All tweets must contain the hash tag #abdsc. Other hash tags might be offered later. So everyone can see who participates and how active everyone is, both on Twitter and Google+.  To view activity and participants on the special #abdsc Twitter page, click here.

If we have enough participants, we will offer more than one $250 award.

We have more than 10,000 blog posts, forum questions and resources on our network. There must be some that you like. To find stuff you'd like to tweet, you can

4. The easy way to participate

If you are already a member of our community (DataScienceCentral.com, BigDataNews.com or AnalyticBridge.com) then posting a link can be done in just one click: find the Twitter or Google icon at the bottom of the article, and click on it. There is a Twitter and Google+ "share link" icon at the bottom of each message on our network, including this very message: you are welcome to use this page for your first #abdsc tweet!  Don't forget to add the hash tag #abdsc anywhere in your tweet, e.g. at the end.

Finally, you can have more than one hash tag per tweet, as in

Winners will be contacted by email to receive payment via Paypal, and featured on Data Science Central and our weekly digest. DSC staff and clients are not eligible.

We also have a separate program to reward very popular, genuine tweets. If a tweet generates a significant volume of high quality traffic (more than 1,000 real page views), we will offer a $500 award to the author. If you want to participate in this special program, you should