Music fans with long memories probably recall the lamentable fiasco that was Woodstock 1999. In contrast to its '60s antecedent, Woodstock '99 was a cravenly commercial venture that replaced Jimi Hendrix and Janis Joplin with Kid Rock and Godsmack. Temperatures hovered in triple digits. Food and water were in short supply. Candles distributed for an anti-gun vigil were used to start plastic bottle bonfires. Limp Bizkit was prominently featured.

It was the worst of times.

Thankfully, the music world only needed to wait three months for something far better to come along. That thing? The Coachella Valley Music and Arts Festival, affectionately known as Coachella. It was held for the first time in October, 1999 and though the festival lost three-quarters of a million dollars and took the year 2000 off, it has been an annual fixture ever since. The aggregate lineup of the last decade and and half is a veritable Who's Who of popular music and the mere publication of each year's lineup is cause for both rampant speculation and breathless hyperbole. This year's announcement was no different. But with one of the more diverse and, frankly, bizarre lineups in recent memory, what do music fans actually think of Coachella 2015? Let's find out.

Data Enrichment: How We Did It

First, we scraped Twitter for hashtag #Coachella2015 immediately after the lineup was announced. We asked our contributors to flag all the tweets that were from actual people as opposed to spammers and radio stations and ended up with more than 3,800 units. So far, so good.

Next, we ran a sentiment analysis job on those tweets, asking whether Twitter users were positive, negative, or indifferent about the lineup. Once we had that, we ran a data categorization job where we had our contributors determine which bands and artists people were tweeting about.

Then we looked at the data.

Overall, Twitter users were really enthusiastic about the festival as a whole. We saw four times as many positive tweets than negative ones, which is refreshing considering Twitter's reputation for widespread disdain. But things got far more interesting when we looked at what artists people are actually excited about.

Like, say, Drake. Man. People have a lot of opinions about Drake. A little under a thousand of original tweets we looked at actually mentioned an artist, but 23% of those were about Toronto's favorite Degrassi High alum. To put it another way, Drake got 211 times the Twitter traffic as Built to Spill.

So what else did we learn about Drake-chella 2015? Well, with apologies to LL Cool J, ladies love cool Drake. Women were twice as likely to tweet something positive about hiphop's most infamous lint-roller than men were and, overall, he received the most attention from women across the board. More men tweeted about AC/DC because more men think wearing shorts with a blazer is a good idea. 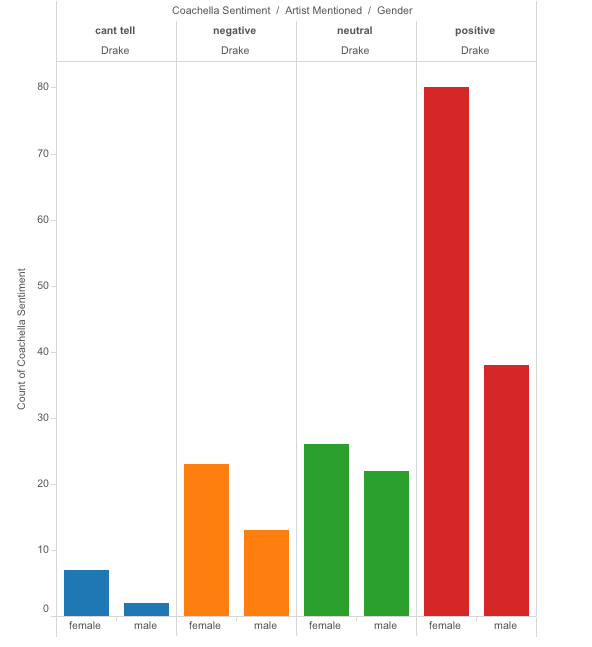 Reelin' in the Tweets

If you expected the festival's headliners to get the most chatter, you'd be two thirds right. Drake and AC/DC received far and away the most attention on Twitter, regardless of sentiment or gender. In third place? Steely Dan.

That's right, folks. Steely Dan, a band famous for its historical disdain of touring got about 50% more tweets than Jack White. And he's that last headliner.

The bad news? Steely Dan received the higher percentage of negative tweets out of any artist. The good news? It was still only 25% negative. Far more people were either excited they'd finally be able to hear "Hey Nineteen" live or were simply perplexed that Steely Dan was playing Coachella. There were also a lot of jokes about dad rock. Can't forget about those.

Out of the 162 acts playing Coachella this year, 113 got some kind of Twitter chatter those first couple days. And really, that's what makes Coachella special. You're not going to love it all. You might not even like most of it. But any time you can get Steely Dan and Lil B together for a common cause, you're probably doing something right.