Here is the distribution of members for the Top 50 locations in the US. The markers in the map show relative density of members. For e.g. Chicago has 423 members & is represented by a Red marker. 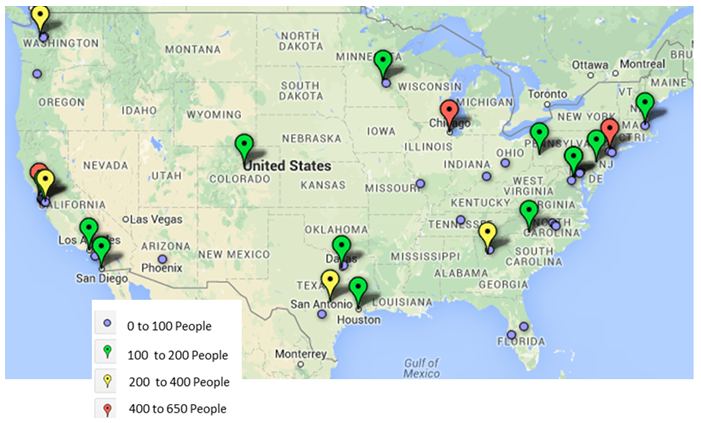 We also correlated our data with external job posting sites such as Indeed.com. We find that the overlap between our community and the larger market for data scientists jobs is strong. The below chart shows about 1400 open job postings with “Data Scientists” in the job title. We have shown the top 13 locations representing about nearly half of the total population. As suspected New York & San Francisco / Bay Area are the top clusters for data scientists which also jives with our membership figures. 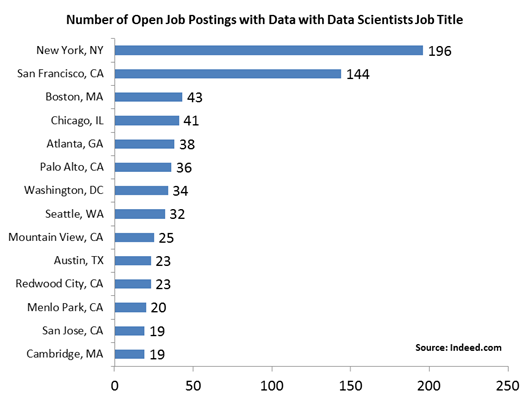 In the top 50 locations from the Data Science Central membership database, we found a strong cluster in the San Francisco – Silicon Valley – Bay area. When we group all of these locations together, we find that there are more than a 1,000 members of the top 50 locations in this area. This is by far the largest cluster of data scientists & does not include places like Los Altos and Pleasanton which are in the bay area but did not make it to the Top 50 locations. We find that these patterns are also being strong in the Indeed data as well.

What do you all think? Any key areas you think we are missing that we needed to focus more on?

No ! Alaska ? I guess we are not a part of the Lower 48 - We should be our own Country.Leave us to defend Japan and Russia !!

Something like this would also be interesting for Europe.

looks like there are no data science people outside usa .... :)

Thanks Livan. If you can do a breakdown of job titles by gender, age, location, and education, that would be terrific, as this is not addressed in this analysis. Maybe even compare job titles - IBM versus Microsoft versus Google.

I was doing that analysis some time ago (I have already the inhabitants data), so I will make the map. It sounds interesting.

What would be interesting to see is the density of data scientists per 1,000 inhabitants, broken down by location (or on a map, with contour levels). I know Los Angeles is well below average, and the Bay Area well above average. Or what about the data scientist density per square mile?

I would be interested in connecting with people in the Data Science community in Houston, TX. I am originally from there, and would like to hear about the types of data science work people are doing there.