Are you a data scientist or a decision scientist?  Interesting question recently raised by Deepinder Dhingra, head of products and strategy at Mu Sigma in his article ‘Data science’ misses half the equation: an argument for ‘decision s... 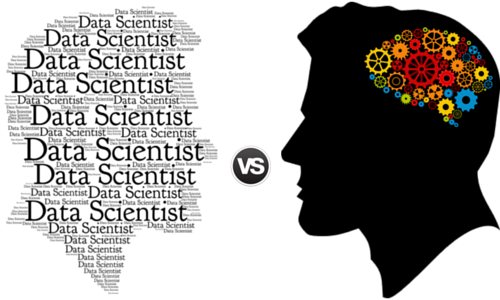 Another way to look at this is through the findings of  Harris, Murphy, and Vaisman published in their 2013 study “Analyzing the Analyzers” which we reviewed in How to Become a Data Scientist.  Harris et al make the point that their research reveals four distinctive types of data scientists:

All of these are necessary, but only the group identifying and Data Businesspeople show a depth of understanding of how the business model and business needs relate to the problem at hand.  This is part of the famous T-shaped profile we are now all so familiar with.

Data Businesspeople, or Decision Scientists then are most likely to be the senior DS on the job who has the initial role of defining the business problem as well as the final role of explaining the solution.

@ Kenneth Watman  Ditto!  I concur!  Every week there is a new "glorious" job title/role/persona being created and discussed to no avail.   Can we just move on with our jobs!?  There is simply a business need to leverage data for the purpose to make better decisions, identify SWOT and/or operate efficiently.

These convoluted, over-inflated titles are becoming absurd these days!  As mentioned before by the other commenter.....Let's just get on with our jobs....and leverage skills, techniques, and methods (i.e. old-nothing new sorts of methods like statistics, modeling, hypothesis testing, etc.)....to simply get the job done.  Geez.

Folks, virtually every week, we have an article purporting to define data science from data engineering from data modeling from data X, Y, and Z. Now we have an article distinguishing between data scientists and decision scientists. In my experience, when a group of people has as much trouble as we seem to have defining who we are and especially who we are not, it is symptomatic of a lack of clarity on our part as to exactly who we are and what we do. Perhaps there just aren't such clear distinctions between all these formulations beginning with "Data...", and perhaps it would not be such a terrible thing to take a vacation from these logic chopping, semantic exercises. Let's just get on with our jobs and let whatever important differences exist among different communities emerge through experience.

"Decision Science" most definitely is an "owned" term in our field. In addition to statistical techniques other pioneers include Ron Howard and Ralph Keeney as well as many others.

Comment by Scott Nestler on October 1, 2015 at 9:21pm
The author's statement about what our employers want vs. what we love is particularly apt. Also, as someone with an OR background, I only partially agree with Dr. Granville's comment, as he omits optimization (a non-statistical technique) from his list of techniques used by operations researchers. Optimization (sometimes also called prescriptive modeling -- answering "what should happen?") is considered by many to be the "big hammer" in the OR toolkit.

Its 2 sides of the same coin. There's huge overlap.

The difference may be historical: people with an Operations Research (OR) background like to call themselves decision scientists. OR is sometimes referred to as "decision science"; it's in fact a set of statistical techniques: simulations, decision trees, Markov chains and queuing theory, survival analysis etc. applied to business, engineering, economic / pricing models, and military operations.