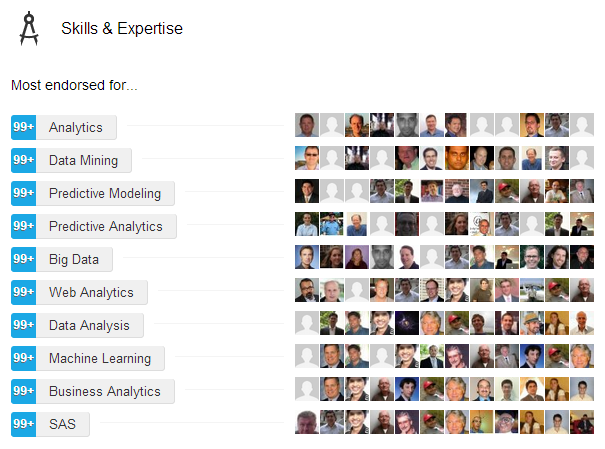 The following lists were created by searching for data scientists with 10+ data science skill endorsements on LinkedIn (see above image as an illustration), and analyzing the top 5 skills that they list, as in the above picture. 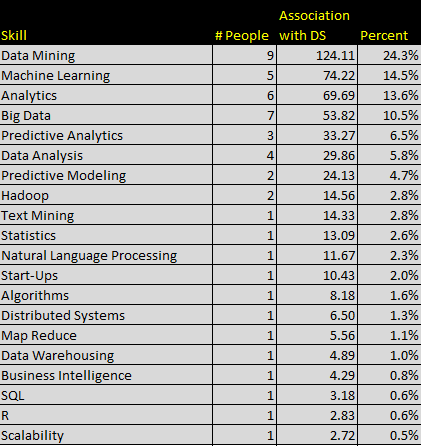 In short, you could write the

Note that surprisingly, Visualization does not appear at the top. Explanation: Visualization, just like like Unix, is perceived either as a tool (e.g. Tableau) or sometimes as a soft skill, rather than a hard skill, technique or field, and thus it is frequently mentioned as a skill on LinkedIn profiles, but not in the top 5. Computer Science is also missing, probably because it is too broad, and instead people will list (in their profile) a more narrow field, such as data mining or machine learning.

The following table shows how (from a quantitative point of view) related skills contribute to Data Science, broken down per skill and per contributor. It is used to compute the above summary table. For instance, the first row below reads as follows: Monica Rogati lists data science as skill #3 in her LinkedIn profile; she is endorsed by 61 people for data science, and by 106 people for Machine Learning. The machine learning contribution to data science, coming from her, is 106 / 3 = 35.33. The people listed in the following table are data science pioneers, among the top data scientists according to LinkedIn. 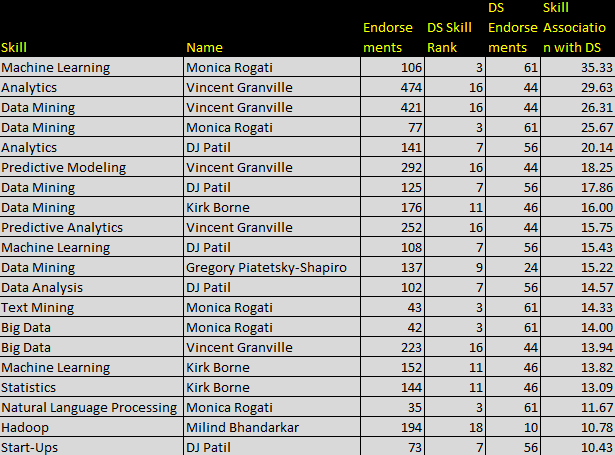 The full list, based on top 10 data scientists identified on LinkedIn, can be downloaded here. Anyone interested in automatically crawling thousands of pre-selected (relevant) LinkedIn profiles to refine my manual analysis? 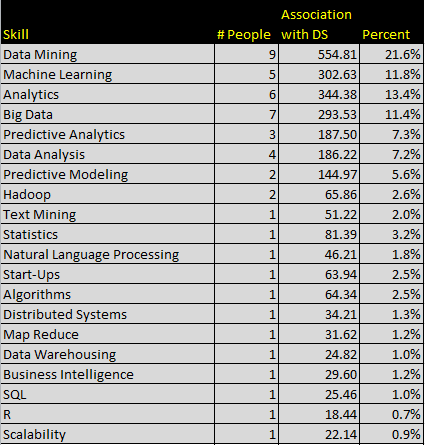 Parameters in the formula

Whether you use the first or second formula, you are dealing with three parameters k, n and m:

The most complicated problem is to identify all professionals with at least 10 endorsements for data science, on LinkedIn. It can be solved by using a list of 100 well known data scientists as seed persons, then look at first-degree, second-degree and third-degree related persons. By finding related people, I mean accessing the LinkedIn feature that tells you "people who visit X's profile also visit Y's profile", and extract endorsement counts and skills, for each person, using a web crawler.

In your opinion, which formula is best, from a methodology point of view? The first one, or the alternative? Not surprisingly, they both yield similar results. I like the second one better.

Read our article types of data scientists to see what we've done with the data analyzed here. In short, classifying data scientists, making discoveries such as: Gregory Piatetski-Spapiro (KDNuggets, Founder) and Vincent Granville belong to a same cluster; Bhandarkar (Pivotal's Chief Scientist) and to a lesser extent Eric Colson (former VP Data Science and Engineering at Netflix), are outliers, both very strong in big data.

How do you think of the difference between Data Mining and Machine Learning? Can we just say Data Mining is kind of like data preparation, cleaning and even crawling from web pages? And Machine learning is mainly about modeling, prediction and so on?

Roberto, it's an study that we will conduct shortly.

I'd try a follow-up question to what you analysed on this one: what skills differentiate the top-level data scientists from the other 8.000. The top skills identified for a data scientist are interesting, but there seems to be a general opinion that being able to analyse is only part of a successful data science career. I would like to prove or disprove that, and also understand what makes these people more successful than any other with a degree on data analysis/machine learning.

@Ralph: It's a bit like if you want to measure US demographics, but your sample contains nobody with a social security number ending with an odd digit (1, 3, 5, 7, 9). Your analysis will still be valid. However, if you wanted to find the 10 oldest Americans still alive, you might miss 50% of them - maybe more as the oldest people were born before social security numbers exist.

Vincent - How are you measuring "statistically validity of data science related fields"?

If you statistical validity for "top data scientists" is weak, what would be the basis for using them as the sample in your other blog?

Yes, statistics is generic indeed. Still, some data scientists include it as a skill, since it's something that potential employers are familiar with.

Hilary is great. Her definition of the data product is probably the best out there.

I think data science statisticians  - at least me - pick up predictive modeling or analytics as statistical skill (or more specialized stuff such as time series or Bayesian networks). Statistics, like computer science is too generic. Plus statistics could mean something different, like sport statistics.

It is indeed disappointing that 'visualization' doesn't appear higher in the list. What good is a data product if its use and applicability to a problem domain can't be adequately communicated? I would also argue that the disciplines of human visual and auditory perception are well researched and firmly in the 'hard' science fields.

Intriguing article! I had no idea it was possible to model LinkedIn members based on this data. I would add Statistics in the feature set, as most data scientists are good at it, whether they rely on it or not in their work. I would be interested in learning more about this project after further analysis has been conducted.