In my previous post, I discussed the relationship between role conflict and performance.  I suggested that all things being equal, role conflict might be the primary determinant of employee performance.  Companies direct all sorts of resources gathering data for recruitment purposes.  All things being about the same, much of that data collection is irrelevant.  This means that if a pool of recruitment prospects is relatively homogeneous in terms of their abilities, the balance of analysis should be focused on role conflict.  In this blog, I will consider the structure of role objects and the perspective of the stress lens.

A role conflict occurs when two roles conflict.  For my model, each role object that a person has contains two components: 1) gates or the role prerequisites; and 2) traps or the role barriers.  An individual carries a persona containing a number of different roles.  When a particular gate is found along with its trap, a role conflict registers.  I created a short algorithm that counts each conflict. 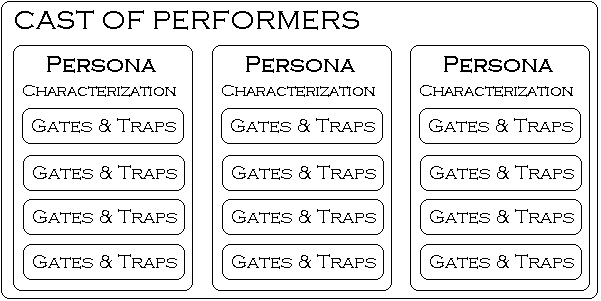 One of the benefits of characterizing a subject as a “persona” - be it an employee, stakeholder, or murder suspect in an investigation - is how the roles can be formulated through a process of speculation.  A persona is shaped to some extent - although not entirely - by the roles that he or she plays.  Within this framework, the resulting persona is mostly a matter of social construction - or as psychologists would say the result of “nurture.”  This is a good thing, since it is much more difficult through an interview or analysis to speculate on “nature.”

It is fair to ask how conflicts should be weighted in relation to employees.  I would say that as an organization encounters different employees, the exact significance of gates, weights, and traps can be determined in relation to the performance metric being investigated.  However, at the beginning of the exercise, a weight of 1 can be applied to each role conflict.  The problem once again is that we don’t know “nature” - and so the significance to the individual is not easily determined - even if were something fixed or static.

Having considered the correlation between the number of role conflicts and a given performance, I want to explain the meaning of conflict.  If a person who loves animals (role = animal activist) spends time arranging cockfights (role = cockfight proponent), this is a role conflict.  In light of both roles, I am sure many would agree that this is an interesting individual.  He is disassociated either in terms of his commitment to animals or his duties arranging cockfights.  This makes him special.  Normally, role conflict should be associated with stress.

I am interested in individuals that demonstrate the ability to make instrumental use of their roles - regardless of the exact setting.  For instance, a person who doesn’t care about clients might nonetheless be employed to care for clients.  A person who sells the inner tubes for bicycle tires who punctures all of the bicycle tires in the neighborhood has a purely instrumental perception of his work.  Some would say that actually there doesn’t appear to be a role conflict.  Police departments receive lots of funding when crime is high.  Car mechanics do well when cars keep breaking down - meaning that it might be more lucrative not to do a great job repairing.

It is therefore more accurate to suggest that instrumentalism as a form of deviance is highly contextual.  The more role conflicts carried by a persona, the greater the likelihood of misalignment with organizational metrics.  But there might not be any conflict if the roles are aligned with the metrics.  If the purpose of the organization is to take money from people regardless of the exact strategy, then from this standpoint it is reasonable to hire those who both enjoy speaking with clients and taking their money.  There would only be a conflict if the employees have an intrinsic need to take money for honest purposes.

Conversely, if we take an individual who enjoys taking money from clients for no good purpose and place him in an honest organization, there would be a role conflict; but depending on the performance scheme, this conflict might not negatively affect his metrics.  So yes - all things operating “normally” - elevated role conflict should lead to reductions in performance.  A great sales person selling junk would remain a great sales person if the metrics is only sensitive to sales.

I want to mention that role conflict for me is not limited to those roles associated with an organization.  Consequently, role conflicts arising from marital difficulties can affect a metric such as sales.  This observation might be relevant for those reading the blog who are unsure about deeper issues of alignment, honesty, and corporate stewardship - possibly leading to disenchantment or some level of unwillingness among some employees.  In my conceptualization, the general relationship holds true regardless of the exact nature of the conflict.

Sometimes our perceptions of conflict are purely speculative; and they serve only to fill the analysis with faulty social constructs.  For instance, if an employee is also a mom, is this good or bad in relation to performance?  Do the analysis and find out!  Yes, put together role objects for each persona, write an algorithm to count the conflicts, and find out.  Keep in mind that it is illegal to hold certain roles against employees - but not their failure to perform their duties.  Alternatively, it is quite possible that the organization itself is inappropriately aligned with the realities of the market that the employees represent.  Sadly at the moment, I don’t have an algorithm for this scenario.

A type of individual that is conceptually instrumental by “nature” is a psychopath.  This person doesn’t have much or any emotional connection to the victims per se.  It is sort of like when I am fishing.  I don’t have much of a relationship to the fish.  My relationship is to the fishing.  It is in my nature to spend quiet down-time outdoors kind of reflecting about what I ate, what I will be eating, how hungry I am, where the fish might be hiding, why the fish are ignoring my offers, how I can adjust the bait or my technique to convince the fish to bite.  Sometimes I find myself trying to think like a fish.  If I were a fish, where might I be during this time of day?

Obviously, I interpret psychopathy and the primitive reptilian brain as something contextual - i.e. it can be turned on or off depending on the exact context.  Everyone reading this has probably sunk their teeth into a burger at some point in life - conditioning their minds to be indifferent to the wailing and fearful cries of innocent cows.  Meanwhile, I am sure that segments of society who have never eaten a burger or been on a farm can hear the creatures gnashing their teeth.

Once roles have been built for a particular persona - keeping in mind that other personas facing the same roles are partly shaped by those roles - it is possible to compare personas for vulnerabilities.  If I know that Subject X is definitely a crook, X can be algorithmically compared to other subjects in relation to his role conflicts.  This is a useful technique if X is primarily defined by a few simple characteristics - e.g. instrumentalism.  On the image below, Subject 2 is quite similar to Subjects 13 and 7 - in terms of their role conflicts.  On the other hand, in order to focus on particular characteristics, it would probably be worthwhile to manually construct the persona.  In this case, the analysis does not pertain to role conflict per se but instrumental conflicts within the context of different roles. 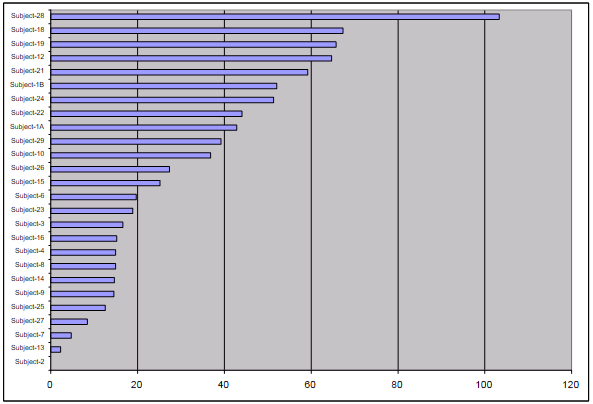 No disrespect to butchers.  However, we might have a cockfight scenario if somebody doing lots of volunteer work caring for children also enjoys killing animals for a living.  I am just saying that this is an interesting person.  People squander all sorts of time watching television.  They can spend a few minutes talking to interesting individuals.  There must be some kind of role construct involved in the dynamics.  “It is part of the job.  I never planned to be a butcher.  But I do the best job I can.  I have pride in my work.”  This is quite different from, “It is funny when the meat is hanging.  It is kind of like how people feel sometimes.  They don’t have any control over their lives.  Then a guy comes to cut them up.  They go to the supermarket.  They lay there naked for everyone.  Hey, that is what life is all about.”

I recently started a program in criminal psychology.  Probably readers can detect how the program seems to be influencing the direction of my analytics.  Although I started the program mostly out of personal interest, it actually fits well with certain aspects of what I do for a living:  I work with the numbers of that people generate.  I also tend to classify behaviours.  This is not to say that I ever expect to become a criminal psychologist.  However, the workplace performance perspective is served well by what I call the “stress lens”: this pertains to how people construct themselves in order to deal with duties and demands that they might not fully understand or be naturally inclined to handle.  By taking this stress lens out of the workplace and applying it to different scenarios, we encounter common social circumstances that can now generate numbers for further analysis.  It is just a way of looking at things and gathering data.