This was the subject of a popular article on Slate, following Obama's idea to bail out people with student loan problems. Decision makers, lawyers, politicians (right or left) or journalists often make recommendations that do not make sense, that are bound to fail, because they lack analytic judgment. This case epitomizes this lack of analytic acumen, and I provide the correct solution if you want to make someone pay (other than the tax payer) for these defaults. 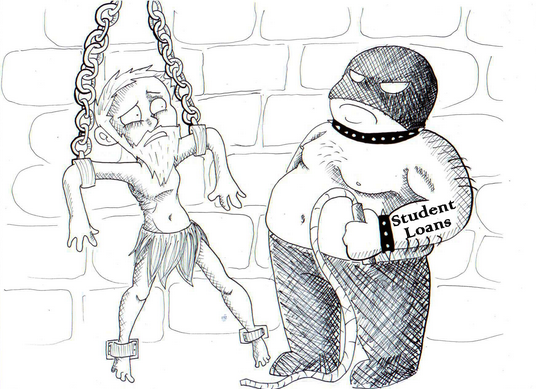 Why this is not the solution, or how to correctly implement it

First, you should only penalize colleges (specific training programs or degrees) if there is a causal link to defaults - for instance, curricula that automatically leads to unemployment. But a proportion of these student loan defaults are caused by

Only when the proportion of default is unusually high, for a specific college and degree, should there be a penalty. In short, Obama needs data scientists, not lawyers to address the student debt problem, because it is very much a statistical problem, at least in the way it is currently approached.

Also, there should be no penalty for debts caused by failure to complete the degree (contrarily to the suggestion in the Slate article, suggestion based on the real fact that a non-completed degree leads to far higher risk of unemployment), except again if there is an unusual high proportion of abandonment in a specific college/degree combination. Otherwise, this might encourage students to drop out, to not repay the loan.

Also, why not penalize the lender, rather than the college? Isn't this an issue of reckless lending, after all? And anyway, a school can increase tuition fees to cover costs of litigation and penalties resulting from this new proposed law. These are all issues that any data scientist would have thought about, even before collecting any data or doing any experiment.

For the future college student, a solution might be to look at programs offered outside traditional colleges, to reduce costs, such as (for data scientists) Coursera, or the Data Science Apprenticeship. Some university programs offer great value despite very high costs, click here for details.

Extracts from the Slate article:

If you borrowed money from the federal government to finance your education and you’re having an extremely hard time paying it back, I have good news for you. President Obama has just signed an executive order that expands eligibility for Pay As You Earn, a newish program that caps the monthly debt payments of eligible borrowers to no more than 10 percent of their monthly income. And if you still have outstanding debt after 20 years, or 10 years if you work in the public sector or for a nonprofit, it will be forgiven, like a youthful transgression.

So what can we do to address the many ways higher education is failing young Americans? A good first step would be to punish colleges that have failed their students, as Andrew P. Kelly and Alex Pollock of the American Enterprise Institute have suggested. The basic idea is that if a student defaults on her student loans, the higher education institution she attended should pay a penalty. The genius of this idea, as Kelly has explained, is that it would make colleges think twice about their lackluster advising, even if the penalty were quite small. Colleges would suddenly have an excellent reason to guide students to majors that would help them gain marketable skills. The usual objection to this notion of giving colleges more “skin in the game” is that colleges would become extremely selective to minimize the risk of default, and this in turn would deny large numbers of students the opportunity to get an education in the first place.