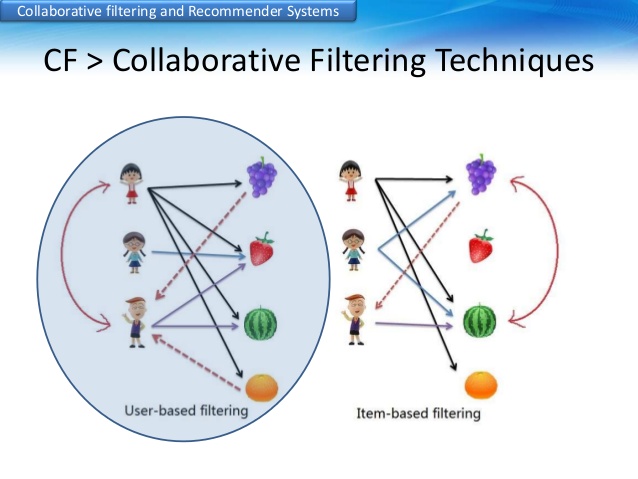 This article covers some good tutorials regarding collaborative filtering we came across in Python, Java and R.

Crab engine aims to provide a rich set of components from which you can construct a customized recommender system from a set of algorithms. The tutorial is from official documentation of Crab.

This article presents an implementation of the collaborative filtering algorithm, that filters information for a user based on a collection of user profiles.

This tutorial presents a family of really simple collaborative filtering schemes. There are no statistics involved, just a little bit of linear algebra.  It is an attempt to translate the ideas in Lemire/Maclachlan paper into less than 40 lines of python code.

MLibsupports model-based collaborative filtering, in which users and products are described by a small set of latent factors that can be used to predict missing entries. MLlib uses the alternating least squares (ALS) algorithm to learn these latent factors. In the following tutorial a part of MLib documentation shows loading rating data consisting user, product and rating data. It shows the use of  default ALS.train() method.

With Mahout Taste one can compare state of the art collaborative filtering algorithms to build a customized solution. This tutorial based on the 0.2 release of Mahout, describes how in few easy steps, one is set up to express creativity without having to reinvent the wheel.

LibRec is a GPL-licensed Java library for recommender systems. It implements a suite of state-of-the-art recommendation algorithms. This tutorial gives the overview of LibRec its algorithms. It also talks about its configuration, development

This tutorial talk about building and testing recommender systems.