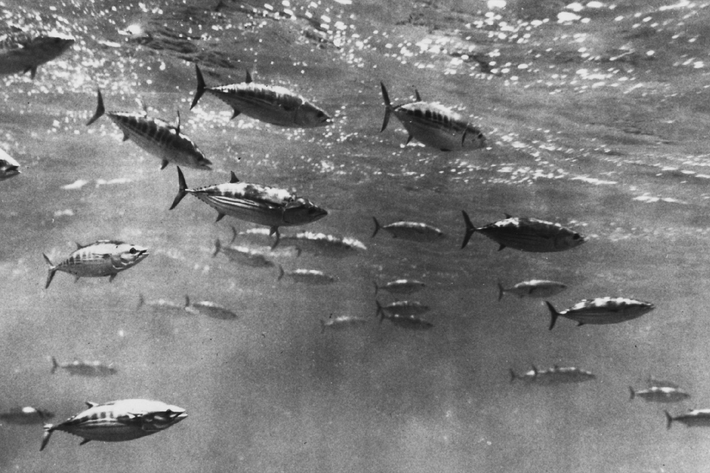 It is not something that a young person necessarily needs to know, but a person my age dedicates some portion of his intellectual resources on the dangers of stock market crashes.  I have reflected over the years on the sort of person I might be today were it not for stock market crashes.  In my earliest recollection, I was so disillusioned, I decided to go back to school to complete my degree.  Here is this peculiar narrative where I could have been much less uneducated than I am today.  I am saying essentially that stock market crashes have sometimes brought out the best in me.

However, I genuinely believe that one of the great hurdles each person much overcome involves threats to their savings.  When I first worked full-time in the financial industry, a number of other coworkers told me about Mr. S's account.  It started off at around $12 million, but it was eventually closed at about $1.7 million.  Of course, $1.7 million was still a lot of money back then in the 1990s.  The enormity of the loss in the hands of a professional investment company hardly mattered to me - primarily because the money belonged to somebody else.  But I am certain that Mr. S had some issues with the situation.  All sorts of people make a lot of money but have difficulty keeping it.

For me, I have the unique ability to invest in equities quite near stock market crashes - a skill that is probably passed down from my father.  It is genetically etched.  This has tainted my lens, I believe.  I came to the realization last week that I am fine with normal fluctuations in the market; it is my fear of stock market crashes that has instilled a deep and perhaps unreasonable level of caution.  This still leaves the question of what to do with excess capital!  Then last week, I encountered a string of accidents that led me to the chart below - representing three years of stock market activity.  I admit that the chart hardly resembles the activity of a stock market.  Nonetheless, I was surprised to find what appeared to be a stable waveform sort of resembling an audio recording from outer-space, right. I created a program to generate the waveform for stocks in general.  I call it Skipjack - named after the tuna.  It skips, dives, leaps, and to some extent "flies" like the tuna.  Hence, the namesake.  So yes, I know that tuna cannot really fly.  No need to write to me about my understanding of the fish.  I mean that as opposed to dive, tuna can swoop into the water.  Obviously, I am no tuna professional.  Nor do I intend to become one.  The important part here is that it is possible to trade off this waveform as opposed to a standard price chart. 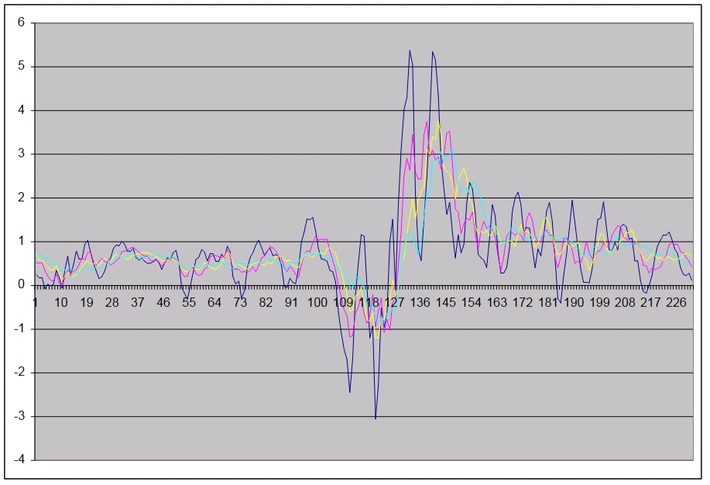 I wrote another program to make simple mimic-trades using the waveform.  This makes it possible for me to "practice" using any historical data.  I noticed right away as that this methodology appears to reduce the likelihood of being invested during a stock market crash.  More than anything else, I consider this the biggest plus.  Nonetheless, 1 year resulted in 6 trades on the stock below yielding a 62.6 percent increase over 93 days invested.  I was wondering how well the approach works on different stocks and periods in history; and this is something I will be testing.  But at the moment, there seems be some kind of yet-to-be-fully articulated conceptual basis that supports the "skipjack effect." 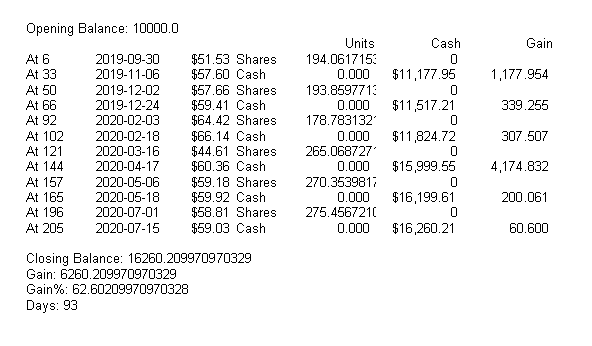 Apart from studying particular stocks, I am curious about the levels of convergence that might sometimes contribute to systemic developments - i.e. stock market crashes.  This has led me to follow the buy-and-sell activity whether real or emulated on a calendar.  The exact angle of the skipjack pattern matters a great deal along with its relationship to the edge of the water.  So I bought out graph paper and my protractor.  It is a lot of fun kind of like being in high school math class again.

As is often the case, some of my interest in stock market patterns is being driven by a course I am taking - in this case a course in technical analysis.  To some extent, it was the inadequacy of the course material to deal with real-life situations that motivated me augment the knowledge base.  Some of the material works.  A fair amount of it does not work nearly well enough for my taste.  In any event, it seems to me that if everyone is using the same historic approaches, it would be quite challenging to gain an advantage.  I feel that the best methodologies are probably not shared with the general public.

The article above has more information.

For those that have developed a tolerance for my life stories, here are some additional articles on LinkedIn . . .

Final Word on Skipjack for a While

Skipjack and the Destroying Angel

Thanks Mirio, maybe I can offer some extra details this weekend.

Sounds interesting. Will you explain how to create the indicator you write about?

Or can you tell us more about the waveform logic you apply to trading...

About technical analysis: Jesse Livermore was a genius stock trader who invented TA, kind of to justify his own decisions. There are some basic things the probably work most of the time, but so many people use it that I don't think you can solidly make money with it.

I strongly believe that many geniuses do this: they concoct a wacky system to explain how they do their thing, instead of accepting that they are geniuses. Freud, Jung, Livermore... "this is how I am so very good at what I do, and you can learn!". No, no, we can't. We're not geniuses.