It has been 20 years since the business intelligence was introduced in the world of business technology. It started from traditional queries which were developed by analysts for the business people to make organisational decision (Ortiz, 2002). At first management information systems (MIS) was used by various organisations for doing different tasks. It had limited features, it could not fulfil the expectations of decision makers such as making decisions in short duration of time, monitoring competition and analysing the raw data from different point of view to analyse the business performance and activity. It didn’t integrate the various distributed data properly and neither could it interpret such data efficiently by creating its interdependencies (Olszak and Ziemba, 2007). In 1970s, a system was designed that supported decision making, named decision support systems. Then after, in the arena of decision support system various DSS, ES, EIS, OLAP and other analytical applications were introduced. In the early 1990s, the term business intelligence (BI) was formed by Howard Dressner (Watson and Wixom, 2007). In the mid-90’s BI became a subject of concern in investigating good approach of data extraction, transformation and processing (Golfarelli). Today, BI has evolved from traditional, mono-function, in-house program to pre-packaged, versatile, business assets (Ortiz, 2002). 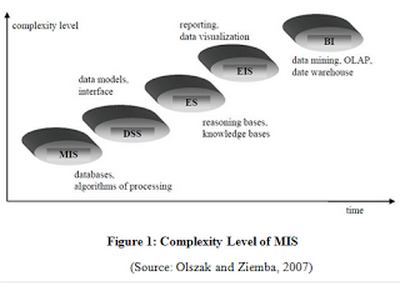 BI is associated to data mining and analytics. Data mining will determine significant forms in massive amount of data to prepare forecasting. Analytics will help non experts to utilise BI by using tools having simple interfaces in business applications (Ortiz, 2002). Its framework conducts two actions: The first one is getting data in, conventionally referred as data warehousing. It is the procedure of moving data from data resources into a data warehouse. Data sources can be found within the organisation, supplier or customer. Data warehouse extracts raw data from the data source and transforms it into meaningful information for decision support. This getting data in is the most essential and difficult part of BI. It may require round about 80% of the time and effort and more than 50% of total cost of the project. The difficulty may arise due to low quality of data resource, legacy system and bad policies of data owner. Bill Inman defines: “A data warehouse [as] a subject-oriented, integrated, time-variant and non-volatile collection of data in support of management’s decision making process.” The second one is getting data out, which will allow users to access information from DW to make business publication services, online analytical processing, querying and analytics. It is referred as BI (Watson and Wixom, 2007). 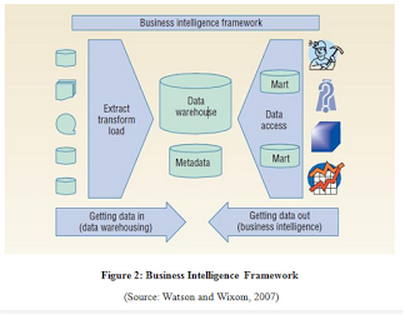