Big Data is big in gaming. Take Zynga, the company behind Farmville, Words with friends, and Zynga Poker. Zynga positions itself as a maker of “social” games, which are generally played on social media platforms (rather than game consoles like Nintendo, Xbox or PlayStation) and take advantage of the connectivity with other users that those platforms offer. 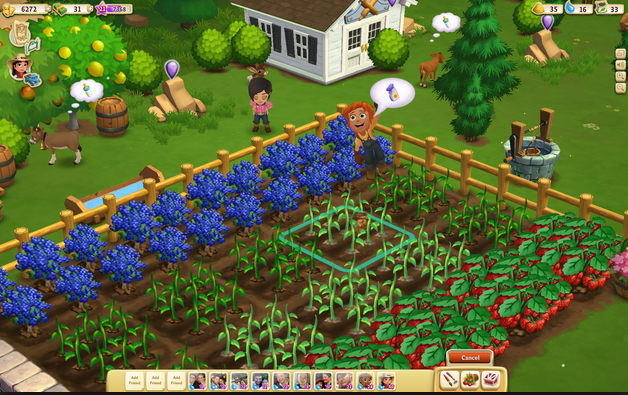 Their games are also built to take advantage of the Big Data that those platforms enable them to collect. So I thought it would be interesting to have a look at how companies such as Zynga have leveraged data to provide gamers (or bored office workers) with novel, compulsive distractions. And of course to make themselves piles of money, too.

At their company’s peak as many as 2 million players were playing their games at any point during the day and every second its servers processed 650 hands of Zynga Poker.

Zynga’s games and the hundreds of others which work on the same principle – for example the hugely popular Candy Crush Saga – use a business model which has become known as “freemium”. Players do not have to hand over cash up front to pay them, although they often charge small amounts – microtransactions – for enhancements that will give them an advantage over other players, or make the game more fun.

For example in Farmville, which simulates running a farm – you can buy extra livestock for your virtual agricultural enterprise. Arrangements are also in place with a range of “partners” ranging from credit card companies to on-demand movie services, allowing players to earn credits to spend in the game by taking up their offers.

This ties into their second revenue stream – advertising. While playing, you’ll periodically see adverts just like while watching TV or reading a magazine. Here, the data that they pull from Facebook is used to offer marketers a precise demographic target for their segmented online campaigns.

Big Data also plays a part in designing the games. Zynga’s smartest Big Data insight was to realise the importance of giving their users what they want, and to this end monitored and recorded how its games were being played, using the data gained to tweak gameplay according to what was working well.

For example, animals – which played mostly a background role in early versions, were made a more prominent part of later games when the data revealed how popular they were with gamers.

Zynga’s marketing and sometimes intrusive presence on our social media screens has certainly come in for criticism, and the company’s fortunes have declined in recent years. This is in part due to the ending of their “close relationship” with Facebook, and in part because in the tech world there is always something new, shiny and often also free, popping up to draw users elsewhere.

But its formative years and heyday, serve as a good example of a business built on innovative use of data from the ground up, and heralded the arrival of Big Data as a force for change in the gaming industry.

That change is still ongoing. Game developers are more aware than ever of the huge amount of data that can be gained, when every joystick twitch can be analysed to provide feedback on how gamers play games, and what they enjoy. Once a game has been released, this feedback can be analyzed to find out if, for example, players are getting frustrated at a certain point, and a live update can be deployed to make it slightly easier. The idea is to provide the player with a challenge that remains entertaining without becoming annoying.

Their ultimate aim is always to get players gaming for as long as possible – either to feel like they are getting value for money, if it was a game they paid for, or so that they can be served plenty of ads, if it’s a free game.

It has even  been suggested  that Microsoft’s $2.5 billion acquisition of Minecraft last year was because of the game’s integrated data mining capabilities, which Microsoft could use in other products. Minecraft, he extremely popular world-building game, is based around a huge database containing the thousands of individual items and objects that make up each world. By playing the game, the player is essentially manipulating that data to create their desired outcome in the game. Minecraft, in Microsoft’s opinion, provides an ideal introduction to children on the principles of structuring and manipulating digital data to build models which relate in some way to the real world.

The next big revolution in gaming – and indeed many other aspects of our life – is widely expected to be virtual reality. Sony, Facebook and Microsoft are all intending to launch VR headsets in the near future, and gamers will be some of their keenest adopters. They will probably go on to hugely impact the way we interact and explore data well outside the realm of gaming, as shown by Facebook’s purchase of the Oculus Rift technology. However, many of the innovations using the technology to enable that interaction will likely emerge from the gaming industry. Gaming is likely to play a key role in interface design as well as developing procedures for processing and monitoring data generated by people interacting in an immersive virtual environment.

Gaming – which for some time has generated more revenue in the US than the movie industry - has always been a hotbed of innovation. To succeed, a business has to be ahead of the technological curve, in order to grab the attention of its audience. It’s no surprise that its key players have been quick to get to grips with big data analysis, to keep us glued to their latest big budget releases and viral social media time killers. And as long as we need digital diversions to take us away from the mundanities of real life, those innovations are likely to continue.

I think data science in games is so interesting, but who wants to use data about this realm will find many problems and little opportunities to get data if you are outside from one game company.