Using the ID research method (read the free sample chapter 2 of my book Nullius in Verba to find out how its done) I found numerous publications, which uniquely 100 per cent  disprove the comforting old Darwinist paradigm that no naturalist read Patrick Matthew's (1831) hypothesis of natural selection before Matthew made Darwin aware of it in 1860 following Darwin's (1859) replication of it in the Origin of Species.

Brief Introduction to implications of the New Big Data Discovery

Charles Darwin and Alfred Wallace each claimed to have discovered Patrick Matthew's (1831) prior-published original theory of natural selection independently of Matthew's work. Moreover, Darwin claimed no naturalist had read Matthew's ideas - further asserting that those original ideas passed unnoticed until Matthew brought them to his attention in 1860. Then, in  2014, using newly available BigData research methods, I uniquely proved that Matthew's ideas did not pass unnoticed, because at least 25 people cited Matthew's book before 1858. Seven of those were naturalists. Four of the seven were known personally to Darwin as associates and/or correspondents and one was the editor of Wallace's (1855) Sarawak paper. Three of the seven played major roles influencing and facilitating the pre-1858 work of Darwin and Wallace on the topic of organic evolution. Furthermore, Darwin is proven to have told a deliberate lie in 1860 when he wrote that no naturalist had read Matthew's ideas, because Matthew had already informed him that the famous naturalist Loudon had reviewed his book. Matthew then informed Darwin that a second naturalist had read his book - but was afraid to teach its radical ideas. Unperturbed by the truth, Darwin (1861) continued disseminating his lie about Matthew's ideas passing unnoticed from the third edition of the Origin of Species onward.

These newly discovered Hard facts demand an end to the past 155 years of Darwinist faith-bias mythmongery about the discovery of natural selection. The New Data means that some kind of Matthewian knowledge contamination is now rationally more likely than not. Further evidence, some old and a lot that is new, including a plagiarism check, proves it more likely than not that Darwin and Wallace committed the world's greatest science fraud. See my book Nullius for all the fully evidenced details.

The comforting old paradigm, which accepts Darwin's and Wallace's anomalous claims to 'independent discovery' of a complex prior published hypothesis, is dragged before the spotlight of truth, good sense and reason by my original disconfirming evidence as a strangely ignored and weirdly credulous absurd belief in a miraculous paradox of dual immaculate conception replications of Matthew's original discovery. 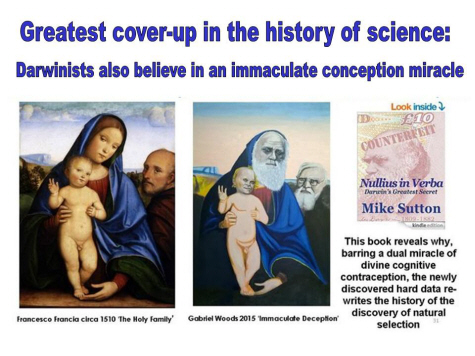