'Best', according to data science: 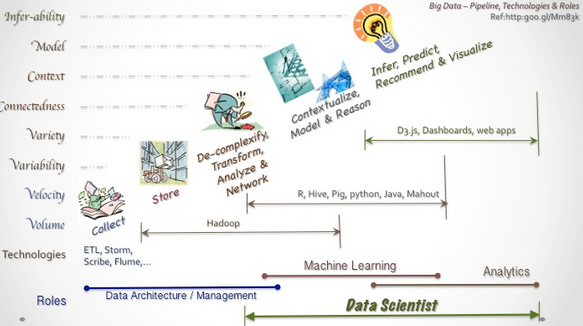 There are other differences. An interesting and recent discussion by Andrew Gelman (one of the most famous statisticians) generated some criticism against data science:

In the end, there is no such thing as a real data scientist or statistician. It's all about a personal feeling reflecting your career. Some statisticians are more data scientist than me. You can say the same thing about any profession. Some have tried to create laws about appellations, but that's the wrong approach. In the new language that I promote, called New English, anyone can call herself lawyer, doctor, married, data scientist, bank - you name it. Just do your due diligence before hiring or talking to someone who claims to have some credentials, whatever these credentials might be.

I will finish this article with the following statement, which epitomizes the data science approach, as well as the reluctance by a few change-adverse people to try it:

Comment by Alex Sánchez on December 28, 2014 at 8:02am
Nice post but, IMHO, it provides an excessively narrow-minded view of statistics and statisticians in front of a too optimistic view of data-science and data scientists.
Probably we all would like to have optimal solutions to the problems we work with but statistics has plenty of tools to deal with sub-optimal situations that have not even been mentiones.
Being a statistician myself, I have been binarized too many times --probabilist vs statistician, frequentist vs bayesian, applied vs theoretical-- although I, like many others, have always tried to take the best of every world when needed.
I think that what is needed right now is to look for -and to show- those aspects that Statistics and Data Science share and how tey can complement each other.
This will no doubt help future generations of ...whatever we call them more than yet another unnecessary binarization

Personally I think the comparison is not meaningful. We shouldn't differentiate between data science and statistics so much. Data science can be considered using knowledge and techniques from many subjects. For example, as a good data scientist, one should have a good knowledge of database, programming language, data mining methodologies, etc. For many data scientists right now, statistical knowledge probably will be the most important one.

As a statistician myself, I can see that statistical science has evolved during the past years. Statistics is about getting insights from data, not necessarily the most optimized or unbiased solution.

Comment by Randolph Abelardo on December 19, 2014 at 4:36pm
George E. Box wrote that, "essentially, all models are wrong, but some are useful" in his book on response surface methodology with Norman R. Draper.
- http://en.m.wikipedia.org/wiki/George_E._P._Box

Another iconoclastic redefining article from Dr. Granville that's ahead of the curve on what data science is all about. Appreciate the "anti-elitist" call-out. I must say I have a bias for quality models myself, but practicality and fast turn-around is what business is all about. Nice work again Dr. Granville for saying what many of us think already. Appreciate your leading voice.

Could it be said that models are abstractions of the underlying "reality"? And that data are just a by product of the 'reality?'   And being abstractions and by products both can only come up short of reality?

I'm more of an empiricist, models be darned.   I still want to predict what I want to predict without my panties getting in a bunch of a model.  But that's me and tends to get me in trouble from time to time with those model hunting theorist types.

Models rest upon data. Data rests upon the data collection mechanism. The relationships are hierarchical. If the leading layer (data collection mechanism, including fields to be identified, captured and coded) is poor, no amount of data, and no amount of modeling, will fully make up for the deficiency (though partial recovery is sometimes possible on badly collected data, if data is huge and/or ad-hoc models are used that detect and correct data biases).

"Data is only as good as the tool that collects it."  (Jetton, 2014)  Be careful of giving too much credit to the collection of data for conclusion purposes. Yes, reliability and validity still have to be considered with big dat.

Plus as a brilliant mind once said, "Models are always wrong, but many are very handy" (who said this?)