In part one of this blog post we discussed the traits of people you should try to build in a data science team.  Of course technical, statistical, programming and mathematical skills are needed.  However, it takes much more.  We discussed the following traits:  The Pioneer, The Cattle Herder, The Muscle, and The Story Teller.  See below for that blog post:

I also stated that I would detail traits that you dont want to have on your data team.  These traits are: The Zealot, The Bully, The Sloth, and The Clown.  In this blog we will discuss these traits and what they mean and why you should attempt to avoid them.  I know it takes a village and yes this is an ideal world I am crafting but at least we have something to work toward and maybe get a laugh.  Don't get me wrong, we all have a little bit of these traits in us.  Hard to believe but I am no perfect vessel.   Lets get going! 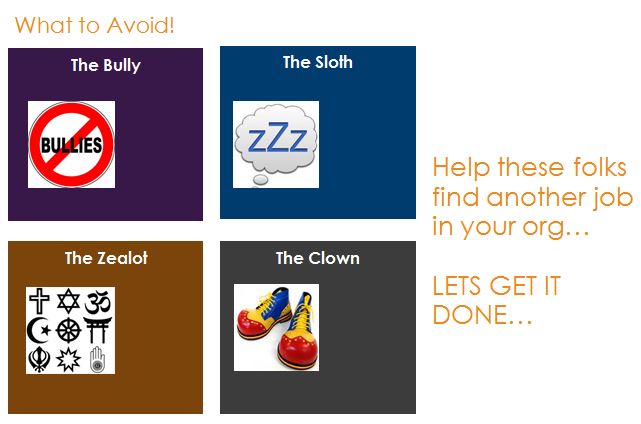 The Zealot:  The zealot is someone that is technology driven.  They are not solution driven.  They care about the stack, learning the stack, and are hardcore and inflexible.  You will notice these people very easily.  They say things like "It must be..."  "We must use this..."  They are firm in their convictions and very technical.  There usually is a platform after what they say must be done.  They are driven in absolutes, generally immature, and do not allow other opinions to surface and attempt to destroy the credibility of the alternative.  Their interest is less in the business challenge and more about their ideas and what they are going to learn.  They also typically don't play well with others.  They will also abandon you the moment it is right for them.  Your organization is training them for their next job move.

The Bully:  This is the least talented person on the team.  They have very low self esteem.  They don't like it when others are successful.  They almost go out of their way to knock down ideas.  They have a lot in common with The Zealot.  They tend to be publicly aggressive, opinionated, and terse.  They will speak without thinking and are running on pure emotion.  They feel a sense of entitlement.  They can really harm the spirit of a team and lower the overall team emotional and intellectual IQ.  It is really unfortunate when a Bully is actually very talented.  It is even worse when a bully gets a mandate from their management.  Sometimes really bad management will let their bully be a bully.  They will say things like: "that person is a hot cup of kick ****, we need that"  No you don't need that.  Intelligent people can solve their problems without having an attack dog in the front yard.  Don't forget that the attack dog can bite the family too.

The Sloth:  Everyone loves the sloth.  It is slow to react, doesn't return phone calls, doesn't return emails, and tries at all costs to avoid actual commitment.  They are very very likable.   This makes them very hard to deal with and understand.  They will never raise their hand, they will never put themselves out, they will also keep their opinion to themselves.   They go with the flow.  Now, if your flow is going down the wrong drain, this person isn't going to be much help for you.  This person has no passion and they are often a cheerleader.  The Lego Movie comes to mind:  EVERYTHING IS AWESOME!  This person is likable because they never let anyone down directly, BECAUSE THEY NEVER COMMIT!  They generally show up for dinner on time too!

The Clown:  This is the impostor on the team.  They are the life of the party and that makes them very likable.  They have a lot in common with the Sloth, but they are very vocal, very fun to be around, always telling jokes, and pulling pranks.  They are the time killers to a project.  They generally rely on luck rather than talent.  Luck generally runs out and is at odds with bad luck.  You can't rely on luck.  When the work is being dolled out to the team, they suddenly have an emergency.   They volunteer for the simple tasks: status reports, lunch orders, and such.  This is what makes them different from the Sloth:  At least they try.  They often say things like:  "I am a people person, I manage the relationships"  They could make great story tellers but they lack the ability to understand the story let alone the statistics.

John, you just described me to the nth degree.  Naa.   If I described cold symptoms in this blog, most of us would feel a cold coming on.  As I was writing this I was concerned about my own behaviors so you aren't alone.  Like I said in the beginning of the blog:  We all exhibit some of these traits and qualities.  Take this with a grain of salt.  ENJOY!