There are five types of traditional time series models most commonly used in epidemic time series forecasting, which includes

ARMA models are a combination of AR and MA models, in which the current value of the time series is expressed linearly in terms of its previous values and in terms of current and previous residual series. The time series defined in AR, MA, and ARMA models are stationary processes, which means that the mean of the series of any of these models and the covariance among its observations do not change with time.

Comparing the performance of all algorithmic models available for time series, it was found that the machine learning methods were all out-performed by simple classical methods, where ETS and ARIMA models performed the best overall. The following figure represents the model comparisons.

However apart from traditional time-series forecasting, if we look at the advancements in the field of deep learning for time series prediction , we see Recurrent Neural Network (RNN), and Long Short-Term Memory (LSTM) have gained lots of attention in recent years with their applications in many disciplines including computer vision, natural language processing and finance. Deep learning methods are capable of identifying structure and pattern of data such as non-linearity and complexity in time series forecasting.

There remains an open research question on how the newly developed deep learning-based algorithms for forecasting time series data, such as “Long Short-Term Memory (LSTM)”, are superior to the traditional algorithms.

The blog is structured as follows:

However a more detailed understanding The study does not look at more complex time series problems, such as those datasets with Complex irregular temporal structures, Missing observations, Heavy noise and Complex interrelationships between multiple variates.

LSTM is a special kind of RNN composed of a set of cells with features to memorize the sequence of data. The cell captures and stores the data streams. Further the cells inter-connect one module of past to another module of present one to convey information from several past time instants to the present one. Due to the use of gates in each cell, data in each cell can be disposed of, filtered, or added for the next cells.

The gates are based on the sigmoidal neural network layer, enable the cells to optionally let data pass through or disposed. Each sigmoid layer yields numbers in the range of zero and one, depicting the amount of every segment of data ought to be let through in each cell. More precisely, an estimation of zero value implies that “let nothing pass through”; whereas; an estimation of one indicates that “let everything pass through.” Three types of gates are involved in each LSTM with the goal of controlling the state of each cell:

Forget Gate outputs a number between 0 and 1, where 1 shows “completely keep this”; whereas, 0 implies “completely ignore this.”

Output Gate decides what will be yield out of each cell. The yielded value will be based on the cell state along with the filtered and newly added data.

Both in terms of learning how it works, and the implementation, the LSTM-model provides considerably more options for fine-tuning compared to ARIMA

Ensembles of LSTM for time-series Forecasting

Several research and studies have found that a single LSTM network that is trained with a particular dataset is very likely to perform poorly on an entirely different time series unless rigorous parameter optimization is performed. As LSTM is very successful in the forecasting domain, research use a so-called stacking ensemble approach where multiple LSTM networks are stacked and combined to provide a more accurate prediction, aiming to propose a more generalized model to forecasting problems

Research on four different forecasting problems has concluded that the stacked LSTM networks outperformed the regular LSTM networks as well as the ARIMA model, in terms of the evaluation measure RMSE when compared together.

Firstly, by using the AdaBoost algorithm the database is trained to get the training data by generating samples with replacement from the original dataset. Secondly, LSTM is utilized to forecast each training sample separately. Thirdly, the AdaBoost algorithm is used to integrate the forecasting results of all the LSTM predictors to generate the ensemble results. The empirical results on two major daily exchange rate datasets and two stock market index datasets demonstrate that AdaBoost-LSTM ensemble learning approach outperforms other single forecasting models and ensemble learning approaches. 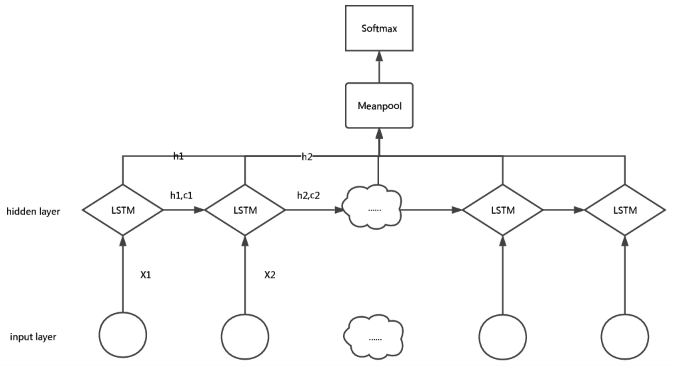 Another example of ensemble learning in LSTM as depicted in the above figure, occurs when the input layer contains inputs from time t1 to tn, input for each time instant is fed to each LSTM layer. The output from each LSTM layer hk which represents the part of information time k is fed to the final output layer, which aggregates and computes the mean from all of the outputs received. Further, the mean is fed into a logistic regression layer to predict the label of the sample.

The ARIMA Algorithm is a class of models that captures temporal structures in time series data. However using only the ARIMA model, it is hard to model the nonlinear relationships between variables.

AR: Autoregression. A regression model that uses the dependencies between an observation and a number of lagged observations.

I: Integrated. To make the time series stationary by measuring the differences of observations at different time.

MA: Moving Average. An approach that takes into accounts the dependency between observations and the residual error terms when a moving average model is used to the lagged observations (q). A simple form of an AR model of order p, i.e., AR (p), can be written as a linear process given by:

Here xt represents the stationary variable, c is constant, the terms in ∅t are autocorrelation coefficients at lags 1, 2, … , p and ξt, the residuals, are the Gaussian white noise series with mean zero and variance σt².

As for example, ARIMA (5,1,0) indicates that the lag value is set to 5 for autoregression. It uses a difference order of 1 to make the time series stationary and finally does not consider any moving average window (i.e., a window with zero sizes). RMSE can be used as an error metric to evaluate the performance of the model and to assess the accuracy of the prediction and evaluate the forecasts.

Based on the time plot of the data, if for instance, the variance grows with time, we should use variance-stabilizing transformations and differencing.

ARIMA is a linear regression based forecasting approach, best suited for forecasting one-step out-of-sample forecast. Here, the algorithm developed performs multi-step out-of-sample forecast with re-estimation, i.e., each time the model is re-fitted to build the best estimation model. The algorithm, works on input “time series” data set, builds a forecast model and reports the root mean-square error of the prediction. It stores two data structures to hold the accumulatively added training data set at each iteration, “history”, and the continuously predicted values for the test data sets, “prediction.” 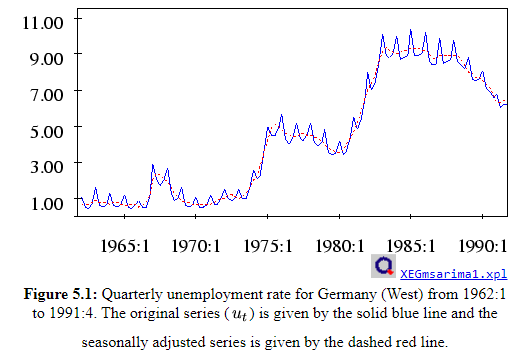 It gives better results compared to stochastic gradient descent optimizer. The activation function ‘relu’ is used which stands for Rectified Linear units (RELU) function. It avoids the problem of vanishing gradient. The predictions from each model are then combined into a final prediction using a weighted average ensemble technique. The Weighted Average Ensemble is a method where the prediction of each model is multiplied by the weight and then their average is calculated. The weights for each base model is adjusted based on the performance ability of each model.

The predictions from each model are combined using the weighted average technique, where each model is given different weights based on its performance. The model with better performance is given more weight. The weights are assigned such that the sum of weights must be equal to 1.

Some of the parameters that are same as ARIMA model are:

There are four seasonal elements that are not part of ARIMA are:

Thus SARIMA model can be specified as:

If m is 12, it specifies monthly data suggests a yearly seasonal cycle.

SARIMA time series models can also be combined with spatial and event-based models to yield ensemble models that solve multi-dimensional ML problems. Such an ML model can be designed to predict cell load in cellular networks at different times of the day round the year as illustrated below in the sample figure

Regional and cell wise load distribution can be used to predict sparse and overloaded cells in varying intervals of time.

Events (holidays, special mass gatherings, and others) can be predicted using decision trees.

On analyzing the domain of the problem to be solved by either classical machine learning or deep learning mechanisms, certain factors needs to be taken into consideration before conclusively choosing the right model.

First, the data are highly dynamic. It is often difficult to tease out the structure that is embedded in time series data. Second, time series data can be nonlinear and contain highly complex autocorrelation structure. Data points across different periods of time can be correlated with each other and a linear approximation sometimes fails to model all the structure in the data. Traditional methods such as autoregressive models attempt to estimate parameters of a model that can be viewed as a smooth approximation to the structure that generated the data.

On applying LSTM and ARIMA on a set of financial data, the results indicated that LSTM was superior to ARIMA, as LSTM-based algorithm improved the prediction by 85% on average compared to ARIMA.

The study concludes with some case studies why specific machine learning methods perform so poorly in practice, given their impressive performance in other areas of artificial intelligence. The challenge leaves it open to evaluating reasons of poor performance for ARIMA/SARIMA and LSTM models, and devise mechanisms to improve model’s poor performance and accuracy. Some of the areas of application of the models and their performance is listed below: