Analyzing the structure and effectiveness of news headlines using NLP

We wanted to gather and analyze news content in order to look for similarities and differences in the way two journalists write headlines for their respective news articles and blog posts. The two reporters we selected operate in, and write about, two very different industries/topics and have two very different writing styles: Note: For a more technical, in-depth and interactive representation of this project, check out the Jupyter notebook we created. This includes sample code and more in depth descriptions of our approach.

In linguistics, a parse tree is a rooted tree that represents the syntactic structure of a sentence, according to some pre-defined grammar. Here’s an example; 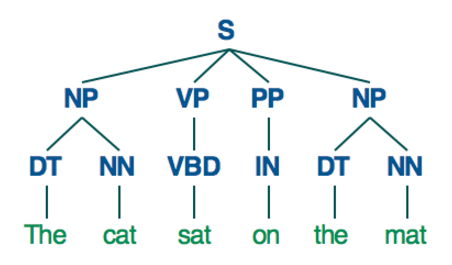 Thankfully parsing our extracted headlines isn’t too difficult. We used the Pattern Library for Python to parse the headlines and generate our parse trees.

In total we gathered about 700 article headlines for both journalists using the AYLIEN News API which we then analyzed using Python. If you’d like to give it a go yourself, you can grab the Pickled data files directly from the GitHub repository (link), or by using the data collection notebook we prepared for this project.

First we loaded all the headlines for Akin Oyedele, then we created parse trees for all 700 of them, and finally we stored them together with some basic information about the headline in the same Python object.

Then using a sequence similarity metric, we compared all of these headlines two by two, to build a similarity matrix.

To visualize headline similarities for Akin we generated a 2D scatter plot with the hope of grouping similarly structured headlines close together in a graph in groups of sorts.

To achieve this, we first reduced the dimensionality of our similarity matrix using tSNE and applied K-Means clustering to find groups of similar headlines. We also used some a nice viz library which we’ve outlined below; The chart above shows a number of dense groups of headlines, as well as some sparse ones. Each dot on the graph represents a headline, as you can see when you hover over one in the interactive version. Similar titles are as you can see grouped together quite cleanly. Some of the more stand-outish groups are;

By repeating the process for our second journalist, Carly Ledbetter, we were then able to compare both authors and see how many common patterns exist between the two in terms of how they write their headlines. 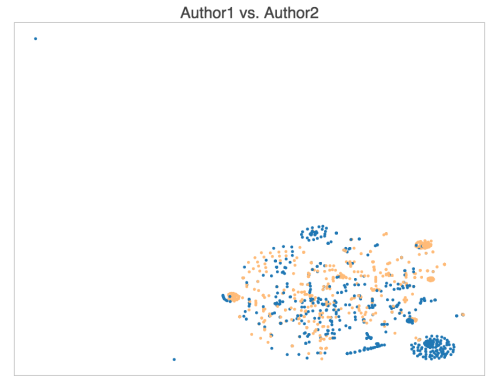 Here we can see the same dense and sparse patterns, as well as groups of points that are somewhat unique to each author, or shared by both authors. The yellow dots represent our Celebrity focused author and the blue our finance guy.

In this project we’ve shown how you can retrieve and analyze news headlines, evaluate their structure and similarity, and visualize the results on an interactive map.

While we were quite happy with the results and found it quite interesting there were some areas that we thought could be improved. Some of the weaknesses of our approach, and ways to improve them are:

- Using entire parse trees instead of just the chunk types

In our next post, we’re going to study the correlations between various headline structures and some external metrics like number of Shares and Likes on Social Media platforms, and see if we can uncover any interesting patterns. We can hazard a guess already that the short, snappy Celebrity style headlines would probably get the most shares and reach on social media, but there’s only one way to find out.

If you’d like to access the data used or want to see the sample code we used head over to our Jupyter notebook.

There are tons of new models available in the literature. Too many to explore. I find the following tool very good. The authors' made their papers & codes available on the net.