Analytics Translator – The Most Important New Role in Analytics

Summary:  The role of Analytics Translator was recently identified by McKinsey as the most important new role in analytics, and a key factor in the failure of analytic programs when the role is absent.

The role of Analytics Translator was recently identified by McKinsey as the most important new role in analytics, and a key factor in the failure of analytic programs when the role is absent.

As our profession of data science has evolved, any number of authors including myself has offered different taxonomies to describe the differences among the different ‘tribes’ of data scientists.  We may disagree on the categories but we agree that we’re not all alike.

Ten years ago, around the time that Hadoop and Big Data went open source there was still a perception that data scientists should be capable of performing every task in the analytics lifecycle.

The obvious skills were model creation and deployment, and data blending and munging.  Other important skills in this bucket would have included setting up data infrastructure (data lakes, streaming architectures, Big Data NoSQL DBs, etc.).  And finally the skills that were just assumed to come with seniority, storytelling (explaining it to executive sponsors), and great project management skills.

Frankly, when I entered the profession, this was true and for the most part, in those early projects, I did indeed do it all.

Data Science – A Profession of Specialties

It’s fair to say that today nobody expects this.  Ours is rapidly becoming a field of specialists, defined by data types (NLP, image, streaming, classic static data), role (data engineer, junior data scientist, senior data scientist), or by use cases (predictive maintenance, inventory forecasting, personalized marketing, fraud detection, chatbot UIs, etc.).  These aren’t rigid boundaries and a good data scientist may bridge several of these, but not all.

With about 65% of folks with the title ‘data scientist’ having entered the profession in the last three years, clearly these new data experts also have learned to slot themselves into roles for which they’re trained and presumably enjoy.

We’ve always had a problem with the consistency of job titles.  Everyone still wants to be a ‘data scientist’.  But it’s fair to say that our understanding of different roles has matured just as these roles have proliferated.

The most recent major change in the way that DS roles are defined comes from the growing importance and penetration of analytics in business.  Analytics has become a team sport requiring not only data scientists, but also data engineers, IT, LOB managers, and classic analysts (aka citizen data scientists).

If you’ve watched the way analytic platform developers have addressed the market over the last many years, clearly their move was to make more room at the technical data table (data scientists, data engineers, analysts).  Now that advanced analytics has become decidedly mainstream among the leaders in all industry segments, the table is getting even larger.

McKinsey with its appropriate focus on business effectiveness and outcomes takes this a step further.  By looking at the now large number of businesses with advanced analytics programs, they say that just having a large and inclusive table is not enough.  Here’s their most current Venn diagram of analytics roles: 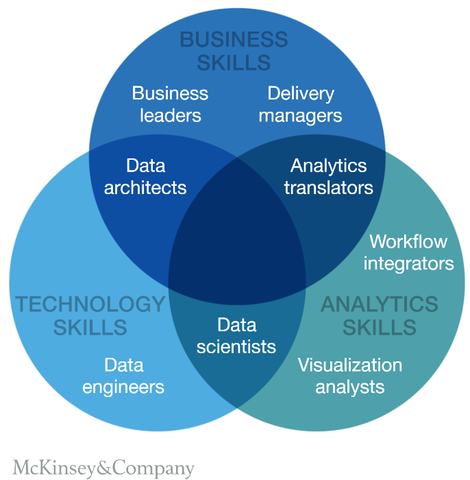 Not unexpectedly they focus on an overall strategy and executive sponsorship.  They have also focused on the role of Analytics Translator as a key requirement for success.

What Does an Analytics Translator Do?

In short, the job of Analytics Translator is to:

In other words, translate business problems into data science projects and lead in quantifying the various types of risk and rewards that allow these projects to be prioritized.

This implies that they have certain skills:

Where Do You Find Them?

Of the skills requirements for the job I still rate the detailed understanding of the underlying data science as the most important.  Even if I don’t personally write the code or set up the architecture I’ve led enough projects to know the ins-and-outs in some detail.

Where I differ from McKinsey’s conclusion is their assertion that these Analytics Translators may come from outside of data science, perhaps from the ranks of existing managers with a focus on business insider knowledge and a track record of successful projects.  Their premise is to find a good general LOB manager and train them for the analytics.

McKinsey’s logic is based on their perception, probably correct, of a severe shortage of experienced data scientists.  But it’s also based on the premise that it takes longer for an outsider to learn the business than it does for an insider to learn data science.

Hmmm.  I’d take exception to that second assertion even if you’re not trying to create a hands-on data scientist.

To support their argument they cite ‘a global steel company’ (unnamed) training 300 translators in a one year program.  McKinsey says they’ve also created their own academy and have trained 1,000 translators in the past few years.

I’m generally reticent to create new naming conventions for roles that have been intuitively obvious if not specifically named.  In this case though I support companies in evaluating their analytics teams to ensure the Analytics Translator role is filled.

Personally, I’d favor hiring senior data science talent from outside favoring those who have broad project experience over many project types, including those outside of the target industry.  Data literacy, or now ‘analytics literacy’ is great.  Formal training of LOB managers in advanced analytics is valuable.  I’d still prefer my Analytics Translators to be deeply knowledgeable of the challenges and opportunities unique to each valuable use case, and that means coming from some years doing data science.

What McKinsey is labelling as Analytics Storyteller, is already labelled by many as Data Storyteller! We should be careful about endorsing new terms coined by anyone and everyone. There are already enough misnomer (i.e., data mining, big data) and duplicated terms (e.g., artificial intelligence, machine intelligence, computational intelligence) associated with the data world.

A lot of the Business Analysts I know that work on data-driven solutions are in fact what McKinsey calls Analytics Translators. They don't do a lot of analytics or coding like the Data Scientists but work closely together. We prefer to have all of them, including some data and software engineers, in the Venn diagram sweet spot.

So true Bill, in 2010 I wrote about this as the bridge translator . Having worked as a consultant and in big companies I have always been the lead analyst communicating between the analysts the it team that was managing the data and the business who gave us requirements.

Given the complexity of data and technology I agree it is easier to  have senior data scientist with business experience then the reverse.

Great points Bill. Probably the most misunderstood aspects of all the analytics, data science and AI ideas.  You need to understand the underlying business process.   Know what you don't know and how to get it.   The algorithms and math are not enough.  Like having a fancy tool chest, but not how to use them in context.  And when you are done you have to convince the decision makers it is done.

Great article!!! I see myself in this new role of Analytics Translator with a Project Management approach. Nowadays I work as Digital Strategist and Analytics/Insights Consultant.

Finally! Someone who understands what I do!