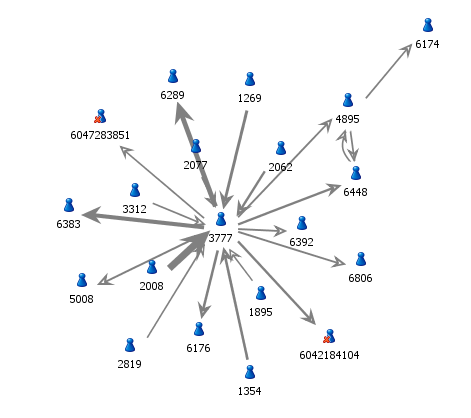 Example of a social network diagram 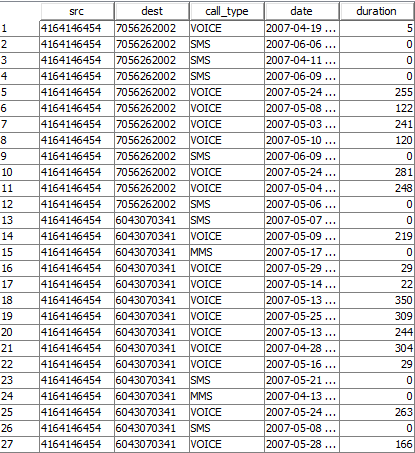 A social diagram representing one of the nodes (3777) in this data set is as follows: 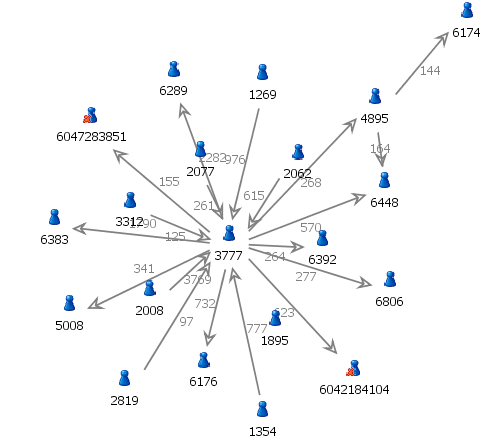 The number of possible relationships in a network is calculated using the formula:

So for example, in a network containing 3 nodes, the maximum number of possible relationships is:

Assuming there are 3 relationships in this network, the density is 3 / 6 or 0.5.

Similarly, in a network containing 5 nodes, the maximum number of possible relationships is:

Therefore the first network is denser than the second network (since 0.5 > 0.2).

The following table illustrates nodal degrees in a 7 node relationship:


Indegree is often treated as a measure of prestige.  Higher indegree values correspond to more relationships ending at that node.  In other words, those individuals are contacted by a high number of other individuals. Many other nodes are initiating relationships with the node.  Conversely, outdegree is treated as a measure of centrality.  Higher values correspond to more relationships originating from that node.  Those individuals contact a high number of other individuals.  For the nodes in the example network, the degree values indicate that nodes A and D are the most active while nodes B and E are the least active. The indegree values reveal that node G has the most prestige. Based on the outdegree values, node A is the most central [Source: SPSS SNA User Guide].

Let us understand that top down approach first.

The top down view of the voice calls made during the month of May from the fictional data set is as follows: 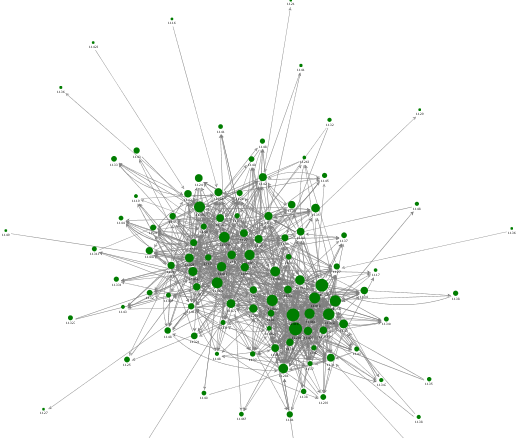 This view shows us that there are a lot of relationships in the network and green circles represent super communities of users grouped together based on similar characteristics.  The next level down appears as follows: 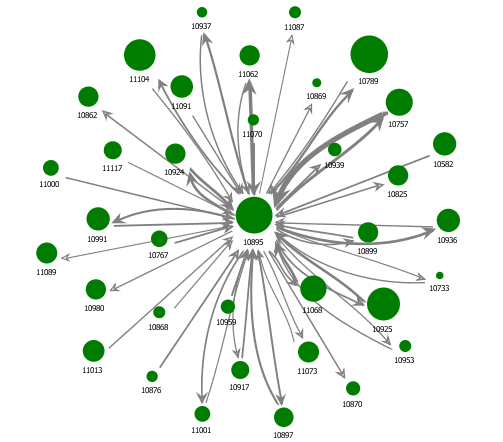 The diagram above displays a closer look at community # 10895 and its relationships with other communities in the network.  You can drill down five levels in Infinite Insight all the way from the bird's eye view down to specific nodes in the network as shown below: 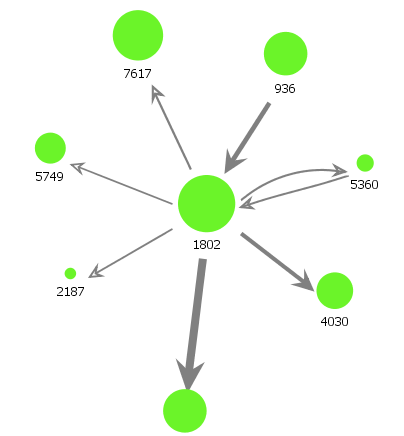 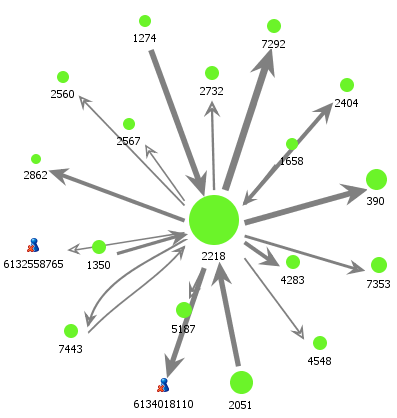 The visualization features within Infinite Insight give you the ability to color code variables of interest such as churn.  Starting from the top down view, if you color code communities likely to churn in a specific color, you can then navigate down to specific nodes to understand exactly what is occurring and come up with action plans to reduce churn risk.

Use cases for social network analysis are varied and include marketing as well as risk and fraud detection.  Marketing applications include customer churn prediction and launching marketing campaigns.  Since group characteristics can influence churn rates, you may be able to predict and prevent churn by using social network analysis to better understand group behavior and thereby individual behavior.  Similarly by identifying influencers within groups, you can launch marketing campaigns.  The influence of a group member make make other members more likely to purchase the offering.  On the risk and fraud detection front, social network analysis can be used to detect money laundering and credit card fraud (using merchant-buyer patterns).