I took only a single biology course during my years in university. My environmental toxicology professor explained that when testing for the LD50 (the dose that kills 50 percent of a population) a certain percentage will probably die right away; on the other hand, some might be able to tolerate unusually high exposure levels. There is a distribution of responses. A related principle applies to stress. People respond differently to stress: some might flee from their stressors (avoid or evade) while others fight (engage). Many stress researchers have concentrated their attention on the person experiencing stress; this is made possible by characterizing stress as a purely internal response. I think that many students experience "exam stress" long before doing their exams; this bolsters the argument that stress is psychological. Perhaps a fair number of environmental toxicologists would point to the importance of external conditions on stress: the differences in internal response might reflect statistic distribution - maybe more involving chance rather than psychology. However, consider the basic argument that there are differences among members of a population. In this blog, I will be discussing the fractal representation of differences among social members. The purpose is to algorithmically assess the progression of environmental change through the distribution of their responses. Not only do I resurrect this notion that stress is brought on by an externality, I suggest that stress involving a population can be used to understand the externality. I have chosen to use technical stock market data for this discussion. Some investors have suffered shocking losses. A few have even shared their stories with me. The stock market is absolutely a stressor. It's not possible to run away from one's apprehensions - again supporting the idea that stress is internal. Yet upon closure of the trading account, the stress seems likely to go away as if external and material (the result of something real rather than merely perceived). I think that both sides are reasonable: stress can extend from external conditions and be internally realized by individuals.

Behaviour of a Kinetic Plume

Apart from introducing the general idea noted above (the use of response gradients to sensitize algorithms to social phenomena), I also intend to provide structural details. Indeed, perhaps my main purpose is to share details. I simply need a way to frame the discussion. Stock market activity can be captured in many different ways. For instance, there is the use of moving averages. I will be using kinetic plumes. I sometimes call these differential plumes since they are constructed using the differences between sequenced pairs. (As such, it is possible to build these plumes using patterns resembling genetic code. This is not to say that they are actually genetic.) The sequencing serves as containment for the underlying data. Having disclosed the sequencing structure for these plumes in at least a couple of blogs, I'm uncertain if anybody has tried replicating the objects. Below, I provide my structural interpretation for a plume having "reactionary" sequencing. My reasoning behind the lows and highs on the illustration is as follows: 1) when the past coincides with the present, the current impact is amplified; and 2) when it counters the present, the current impact is mitigated. However, the measurable extent to which the past influences the present is difficult to calculate. I made use of real stock-market data for the pattern below: the Bank of Montreal (BMO in Toronto). 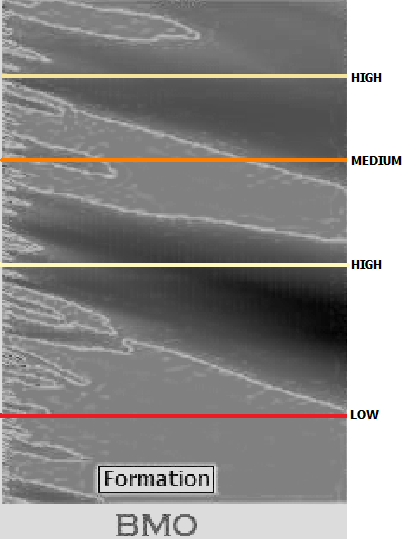 I removed the plume colours to bring attention to the formations, which I consider highly distinctive. In the "classic formation" scheme as shown above, the structures bringing on lows taper to the right; those preceding highs open to the right. In practice, sometimes just the opposite is true (during a prolonged market slump); or there might be lack of coherent tapering and opening. In my previous blog, I discussed how stock-market data is a product of social construction. We are not measuring anything about stocks or the underlying companies but rather the market and its participants. The use of an array or lattice of many plumes can help us to understand the social "environment." I have observed these dynamics using much simpler forms of data: if a data scientist has data from a single person, that data is best associated with that person; if the data is from many people, taken as an aggregate it starts to reflect environmental conditions. For example, if a single salesperson generates sales data, this data reflects just that person. If thousands of salespeople are taken into account, their efforts start to reflect market patterns for the products they are selling. Similarly, if I make use of a large number of kinetic plumes, I enable the detection of broader phenomena affecting the population as a whole. The body is never quite the same as the sum of its parts since certain phenomena are detectable only using the entire organization, system, or ecology.

The plume array shown below all terminate at same trading date: 2015-02-20, which I refer to here as the "set date." The stock symbols all appear on the Toronto Stock Exchange: TD Bank (TD); Bank of Montreal (BMO); Scotiabank (BNS); CIBC (CM); National Bank (NA); and the Royal Bank of Canada (RY). I placed a reference date of 2014-11-17 on one the patterns to give readers a sense of time: there is about 3 months between the reference and set date. Had I purchased $1,000 of each stock at the reference date, accepting fractional shares, the decline after this 3-month period was about 7 percent. (The decline started happening earlier for some of the stocks.) The underlying companies are related to each other by virtue of their shared business markets. However, perhaps more importantly, the plumes are related as a result of those participating as investors. The correction dragging down prices can be characterized as a "social movement": as individual internal responses to external phenomena - bringing forth a collective stress response.

I can offer a numbers of reasons why the correction occurred (the social phenomena). I think each point is worthy of detailed discussion not necessarily suited for a forum on data science. Perhaps the interesting data-centric story is in the following: 1) not all stocks traded on the exchange have been affected by the correction; 2) for those apparently affected, the timing and intensity seem different; and 3) using their plume patterns, the top three stocks appear to respond more similarly than the lower three. It can be said that are similarities and differences in the perceptions of investors that brought about these themes and variations in their plumes. However, I suggest that it is perfectly reasonable to find a collective response in relation to external threats affecting society as a whole. Despite differences in how the threats are recognized, these are not purely "individual responses" linked to perception but also material concerns relating to the market. 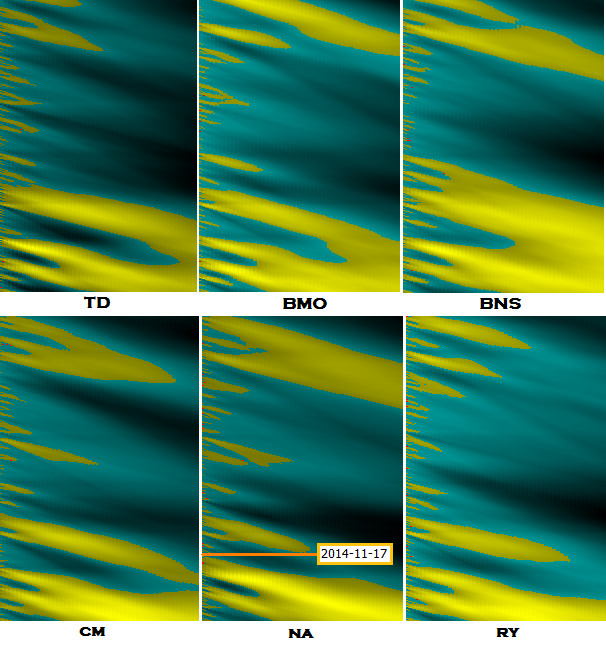 It is not possible to say by looking at these plumes when exactly the correction will end. (I have seen corrections last a long time.) Fortunately, this blog is about detection rather than prediction, allowing me to completely side-step the issue. The idea of a "correction" is interesting by the question of what exactly is being corrected. I think there is a belief among some investors that a portion of a stock's price relates to a company's current profitability; another part is more concerned about future expectations. These considerations are both subject to change; but perhaps the most painful dose of reality occurs when one fails to substantiate the other. If we extend this idea to companies more ecologically, their economic conditions (climates) and business settings (habitats) can affect populations more broadly. For example, an agricultural community might decline not because stop buying the products they produce. The weather might become hostile during a particular growing season. Or the primary means of shipment might become impaired. Expectations may have been perfectly reasonable; however, the locus of control had never been the farmer's entirely. Consequently, the thing being corrected might not be price perceptions per se but our understanding of the environment - our recognition of what remains possible in light of materially deterministic conditions. Having a good attitude and positive outlook will not help failing crops.

I think some readers would complain that the plumes seem suspiciously smooth in light of the choppiness of their stock prices. These particular plumes make use of an averaging technique that I call Phi-averaging, which affects not just the smoothness of the plumes but also the sharpness of their slants. Phi-averaging tabulates from the set date to the dates defined by pair-sequencing. Sometimes I use Pho-averaging, which occurs from the sequencing dates back a certain number of days specified by the user. Then there is a mode that I call "Feral" that makes no use of averaging; as such, it leads to aesthetically unpleasant plumes. (Sequenced pairs that are Feral bring about roughness to the plume patterns.) For presentations intended for people, I normally use Phi-averaging, the gentlest. I keep the data Feral if the patterns are meant for machines. I also don't use the entire plume as will be explained shortly.

Although algorithms are used to generate the plumes, the resulting images are probably much easier for humans to evaluate than computers. For computer interpretation, I offer four measurements to summarize kinetic plumes: core, score, above, and below. I strategically placed a few counters inside the main algorithmic cycle while studying the Bank of Nova Scotia, resulting in the summary lines indicated below. These summaries will be presented as bars in the next section dealing with the use of fractals to detect social movements. 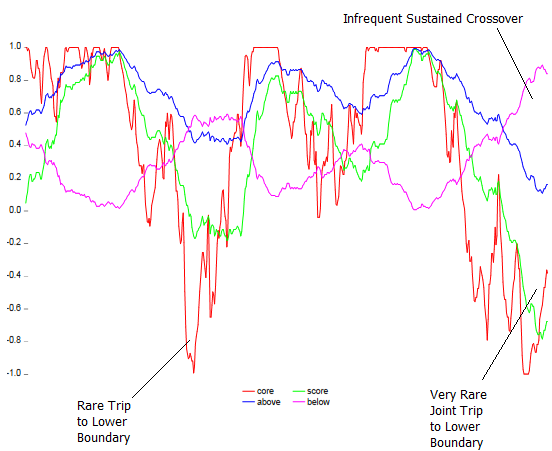 This next image contains a snapshot of the plume summaries for a number of stocks. I introduced the placement methodology for the stocks in a blog on the social construction of technical trading data: x-axis represents a gradient of price activity; the y-axis shows the same but for volume. While the plume pattern for each stock is inspired by paired-sequencing, this is also the case in relation to placement. The pairing is determined fractally. As such, the placement is thematic in nature. Stepping back from the illustration below, I believe there is evidence of a "super plume" judging by the amount of red inside. Perhaps the reader should try to find it now. I think that much more research is necessary to properly explain the manifestation of social movements within populations; however, success in this area might make it possible to infer the progression of social radicalization through the behaviours exhibited by individuals in a population. I feel that the main difference between individual constituents and the ecological body rests in the systemic perpetuation in the latter made possible through social entrenchment; this is something that is imposed by the environment but realized by individuals. 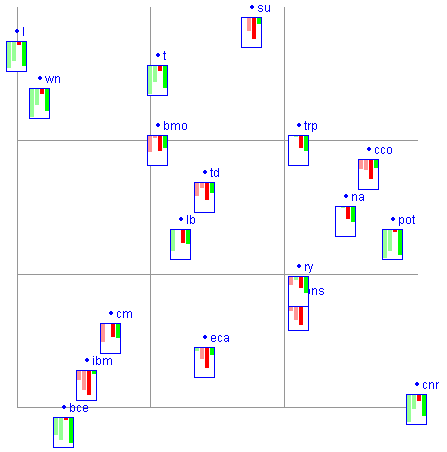 In this blog, I described how it is possible to use the individual responses of a population to evaluate phenomena affecting the collective. I have been discussing stocks. The applicability of this technique on other forms of data remains to be determined. Also at question is the effectiveness of the approach on geographic phenomena - that is to say, events that can be distributed spatially. (I have been describing technology called the "Earthshield" that I actually developed many years ago for earthquake and hurricane data intended for geographic distribution.) Nonetheless, in relation to non-spatial data and social phenomena, I believe that fractals can be used to study movement, progression, and migration.