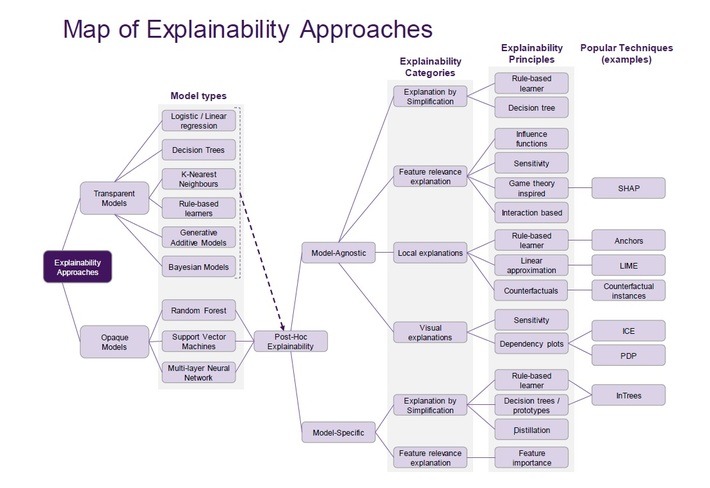 XAI is a complex subject and as far as I can see, I have not yet seen a taxonomy of XAI. Hence, I hope you will find thus useful (paper link below)

For opaque models, types of post-hoc explanations include(adapted from the paper):

Model-agnostic Explainability Approaches are designed to be flexible and do not depend on the intrinsic architecture of a model(such as Random forest). These approaches solely relate the inputs to the outputs. Model agnistic approaches could be  explanation by simplification, explanation by feature relevance or explanation by visualizations.

1)  Explanation by simplification: Includes techniques like LIME. Local Interpretable Model-Agnostic Explanations approximates an opaque model locally, in the surrounding area of the prediction we are interested in explaining

2)  Feature relevance includes techniques like SHAP (SHapley Additive exPlanations) which builds a linear model around the instance to be explained  and then interpret the coefficients as the feature’s importance. SHAP is similar to LIME but theory behind SHAP is based on coalitional Game Theory(Shapley values).

You can download the full paper here Principles and Practice of Explainable Machine Learning by Vaishak ...