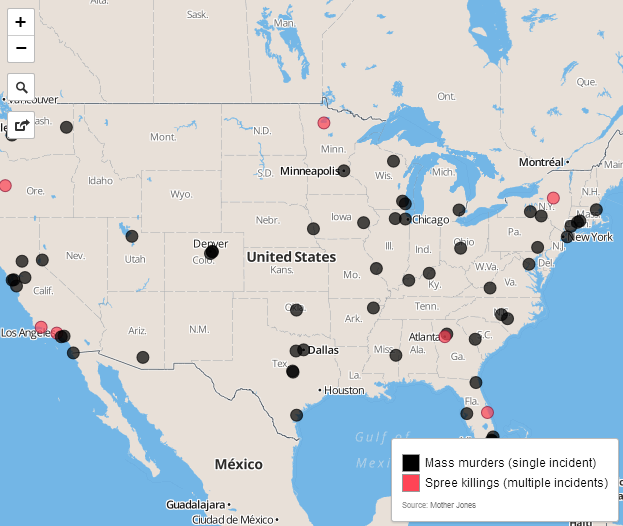 Read full article (where you will be able to zoom in on the map) at http://www.motherjones.com/politics/2012/07/mass-shootings-map. See also the 2nd page for details about shootings, displayed in a timeline. The one that occurred this week in DC is not yet listed.

Russel, I am a little bit deformed by my profession and common to use: 1+1=10. My name is not Abby.

There are areas in math's doing strange things with numbers, thare are also parts of that theory statistics.
The descriptive statistics is just registrating and presenting. With predictive comes the part that everyone may fear for its uncertaintity with type A / B errors.

An other area with reseach reports, many times abused, is manipulating or inventing the data to  get the desired results. Also predicting the feature as being a certaintity can be misleading. Managers telling 1+1=3 with a fusion of companies and when it executes getting 1+1 =0.   Agree with you on that. Some fun of 1+1 = ?

We are in the descriptive part with this figures. You may leave out all personal comments to it. The figures/pictures events are there. Take the link to Shapiro and you have your analyses to several countries. Take the other link and you have all criminal activity including manslaughter in the several years. All that is descriptive and not easy being manipulated.

Smoking was a quite common addiction several years ago, even stronger, it was social not accepted being a non smoker. That has changed dramatically, therefore I made the hint. And I also remember the many emotional discussions on that as not happened long time ago.

If you are interested in some history you can find a lot of empires rise and fall. It is not journlism and you can find comments of many insights. Agree to get informed of more sides, but needing are capabilities of being how trustworthy some information is. So do a research on some backgrounds yourself (why who what etc).

@jaap I am not disputing the list of events.  I have done no research and only know what I heard on the news about the most famous of these cases.  My issue is with the presentation of this material and the cherry picking of stats.  I am a numbers person.  I believe numbers themselves do not lie.  However I do believe that numbers can be manipulated and presented in such a fashion to suggest a persons agenda which is what I believe is going on in the article that was presented. When data is "incomplete" and bonus cases are thrown in "because they we close to fitting the criteria" then the science has gone out the window and the stats given are inherently biased.  I take exception to this because someone is going to read this article then go off and quote the stats to someone else as if they are a truth.

I believe this new type of "journalism" and "reporting" to be (at least a portion of) the root of the downfall of America.  There was a time when you could get news.  Now all you get is stories that are presented in such a way to push agendas from the left and the right.  No one watches the "other sides" news channel so all they see is the "facts" as they want them to be presented.  Now the country divides down party lines and we spend so much time hating the other party that we refuse to see any issue for what it is.  So now we have people fighting over stuff they have no real knowledge about and electing officials based on the color of their campaign poster rather than any kind of real belief system. All anyone knows anymore is that they should either hate California because it's so liberal or they should hate Texas because it's so conservative.

This is why I love math and have been drawn to statistics.  Math is a truth.  1+1=2 no matter which way you try to slice it.  Red, blue, black, white, Irish, English, gay, straight, Christian, or Buddhist... 1+1 will always equal 2.  This is also why I take such exception to people who attempt to use statistics to further a cause rather than find a truth.

@Vincent - Before I stated that I enjoy reading your posts because they are challenging.  To this day I will find myself thinking about the problem you had with the hiking trail dues getting stolen.  This could be one of those types of posts.  I believe there is enough data in the world today to answer many of the questions that have plagued us for many generations.  The issue of whether gun control works could be the easiest because we have a lot of data on the subject. There are many different countries with varying degrees of gun control.  I would think it would be rather easy to look at stats from the different eras of gun control in the different countries to see if there is any correlation between laws being implemented and crime rates.   There was a decade long ban of "assault rifles" in America. It would be easy to look at stats prior to, during, and post ban to see if crime rates were effected. I would LOVE to see some of the great data minds on this site attempt to tackle the question.  I do not have the knowledge or skill to tackle such a task myself, but if you wanted to take it on I would love to help any way that I could.

@russel, can you please explain your reaction, I think I am hearing your heart full of emotions.
If you would deny the mentioned list of events, (mass shootings) it is indicated as incomplete, there is an other point to get clear.

@Russell: You are welcome to provide your criticism. We are open to all opinions, and hopefully, it contributes to making these discussions more lively and genuine.

@Vincent With all due respect I have to disagree with your stance and this article.  The article only uses statistics that back it's agenda. This is falsely portrayed as a study of mass shootings.  This is a editorial piece that spits out some numbers and graphs.  The fact that they would set criteria then add in other cases that don't fit the criteria should discredit this as any kind of study.

21 is the legal drinking age.  Being 20 and drinking is illegal.  Doesn't matter how close you  are.  The legal drinking age is not 20... it's 21. (and I'm pretty sure more children under the age of 21 die from alcohol related deaths than mass shootings so any argument to "ease up on the drinking age law and get tough on gun law for the children" just doesn't work)

I began this post by saying with all due respect.  And I mean it.  Your posts are always informative and challenging because they always follow the numbers.  This is the first time I have seen you post with your heart rather than your head.  An article written with cherry picked stats?  Even if you agree with the premise I would think you would have discredited the article

@Vincent,
I know some laws are making no sense in a social approach as you described. Same everywhere but different in the details. There is some potency in humans to reign over others. You gave some examples of those and I assume a lot more of them exist everywhere. The approach varies as by "winning souls" to the more dangerous doctrines asociated with violence. California could be less free as Korea as you indicated, going three times right is also the same as left. Being a dictatorial community is always bad, no difference of its origin.

Suppose being a tourist going to US. Common advice to them when you will see something abnormal call the police. Hmmm that is a practical joke, being a tourist you will see all the weird things and enjoy. Not really knowing what is normal and what not and what is local social accepted (need to ask).
Just a question, is smoking still allowed? In my youth you would be social isolated not joining the sigarette smokers. My grandad loved his pipe, as sunday pleasure.

The motherjones list looks alarming as a fast increasing numbers of incidents as of last years. It could be an incomplete list. A lot work to compare with: http://www.ucrdatatool.gov/Search/Crime/State/StatebyState.cfm as manslaughter should be reliable in the registrations. Still an outstanding list of incredible higher events as to other high developed and wealthy countries.

The ease of getting guns to use for that is a possible good predictor with that kind of crimes.
That is discussion going on at US with a lot of emotions and they are not always making some sense.

Getting to AR's AK's and more of the weapons meant for mass killings (military) looks to be that easy that those people do not look for other methods. I am convinced a lot of then would think about them if they need to. You mentioned hand grenades, the design is simple you could build it yourself eg using a pressure cooker.
This list could me made very long with realy happened events.
Every hurdle to preclude those bad events should be considerated.
Similar to fire fighting isolate and protect the combustles in a safe way. When getting into fire do one or more of the folowing: cover the fire (smother), when air/oxygen is related to stop that entering to it, or bring the temperature down.

As NSA (Prism) has collected a lot of personal data and they are apparently of any influence, seeing that approach as a solution is failure.

It would be nice if there was an app that can help you download the locations of these shootings (e.g. you upload the image, the app returns a text file with coordinates). Also, if would be nice to have:

In short, I'm talking about about a picture like this one (related to credit card fraud).

@Jaap: Yep, I remember Gregory's article. I wrote back saying that kids were not killed in schools by hand grenades, presumably because you can not legally purchase hand grenades in US. I would think that AR (automatic riffles) are as bad as grenades, but laws in this country are really weird. Having sex at 17 years old with an 18 years old is a felony (for both I believe) and can lead you to a permanent criminal record and labeled as sex offender (same if you urinate in the wild where nobody can see you, e.g. after a long hike in the mountains or a long car drive, where there is no public toilet). But possessing automatic riffles is fine. Drinking a beer if you are twenty is a serious crime. It's very hard to find any kind of logic in these laws.

In Washington state, the most widespread crime is driving with a suspended license, which typically is the result of not paying a ticket, sometimes (as in my case) because the government claims that they haven't received your check. You can be sent in jail for a few months for this (victim-less) "crime". California has the largest (percentage-wise) population of incarcerated people in the world, making it a place less "free" than North Korea, Iran or Russia.