A while back, we found an interesting dataset online. The URL, killedbypolice.net, is fairly self-explanatory. It's a community-sourced list of all "police-involved fatalities", started in May of 2013, but the data itself was a bit jumbled and messy. Race and gender identifiers were in the same column, dates were inconsistent, and though most entries had a news story, we felt there was more information we wanted to know. We put the dataset through our platform to get more information and are presenting it below, as a joint project with Silk.co, who helped us visualize the enriched data.

(Note: you can download the entire dataset here, or visit our Data For Everyone Library)

It's impossible to know if this database contains each and every incident, but starting May 2013 and through May 2015, 2355 people have been killed by the police in America. That's over 3 people daily across the country.

Houston, Texas and Los Angeles, California have the most police-involved fatalities

In the span of two years, 30 people were killed in both Houston and L.A. 5 cities in Texas are among the top 20. That noted, California has by far the most police-involved fatalities, at at least 398 in the past two years alone. Texas, Florida, and Arizona had over 100 each. 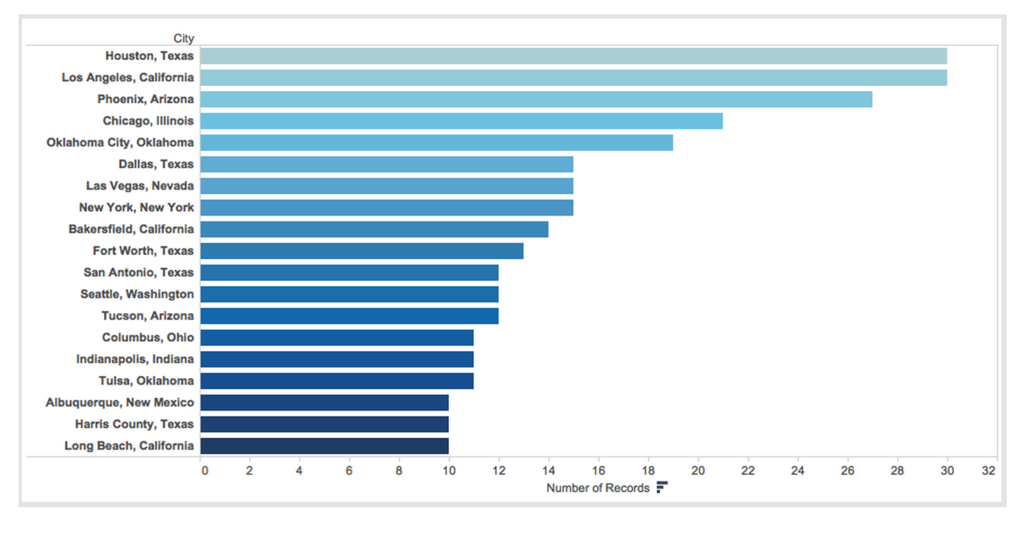 Men were 15 times more likely to be victims than women

Police-involved fatalities skew heavily towards men. A staggering 93% of deceased were men (2207 of 2355 total).

At least 62% of victims were armed 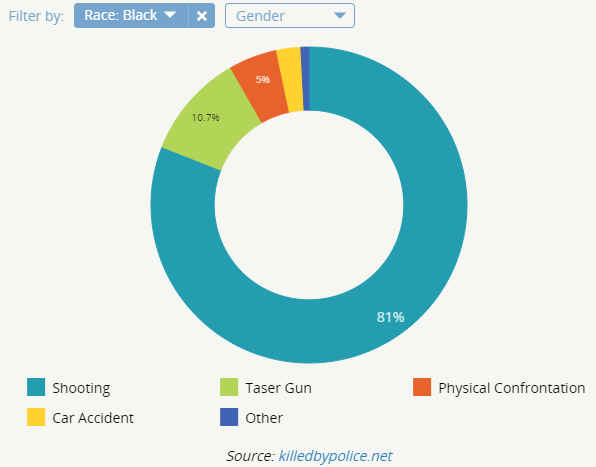 At least 19% of those victims had a criminal record

This was a harder question to answer, since not all news stories contained information about the deceased's priors (or lack thereof). We were able to confirm that 435 did have a criminal record, which is where that 19% comes from.

The map below is interactive and contains the number of police-involved fatalities and underlying data. The range goes from a single death (North Dakota) to 398 (California).

While California had far more police-involved fatalities than any other state, red states like Oklahoma consistently ranked highly based on deaths per capita. The chart below is for 2015 and Silk has broken this data out by year, which you can find here.

At least 28% of officers involved were placed on administrative leave

We also learned that many counties and localities automatically place police officers involved in a shooting on administrative leave while they investigate the incident in question. Again, though many articles were unclear about whether an officer was placed on leave, over one fourth of involved officers were as confirmed by news stories.

How we did it

To enrich this dataset, we first scraped killedbypolice.net, then built a series of jobs. The first was a simple categorization job, where we asked our contributors to clean some of the messier rows, remove bad characters, separate race and gender (which were listed in the same column), etc. After that, we ran a pair of jobs that asked our Level 3 contributors to read source articles and answer questions like "In what city did the incident take place?" and "Was the deceased armed?"

Our enriched dataset is available for download in our Data for Everyone library. It contains all the information above, as well as the source articles for each, names and photos of the deceased, specific dates, and more. If you choose to visualize or analyze the data, we'd love to hear from you.