This article on the 10-dimensional burrito was posted by Scott Cole. Scott is a PhD student studying neuroscience at UC San Diego, currently researching the functions and measures of neural oscillations in the Voytek lab.

In his work, Scott and his team have developed a 10-dimensional system for rating the burritos in San Diego. The goal of this project is threefold:

At this time, 30 reviewers have visited 31 taco shops and critiqued 104 burritos. So far, a general consensus has identified The Taco Stand in downtown La Jolla as having the best California burrito, but there are many more to try. Here, the average burrito costs about $7 and is about 850mL in volume. Further, they explore correlations between burrito dimensions, such as the quality of the meat and nonmeat fillings, and identify a novel correlation between tortillas and Yelp ratings. 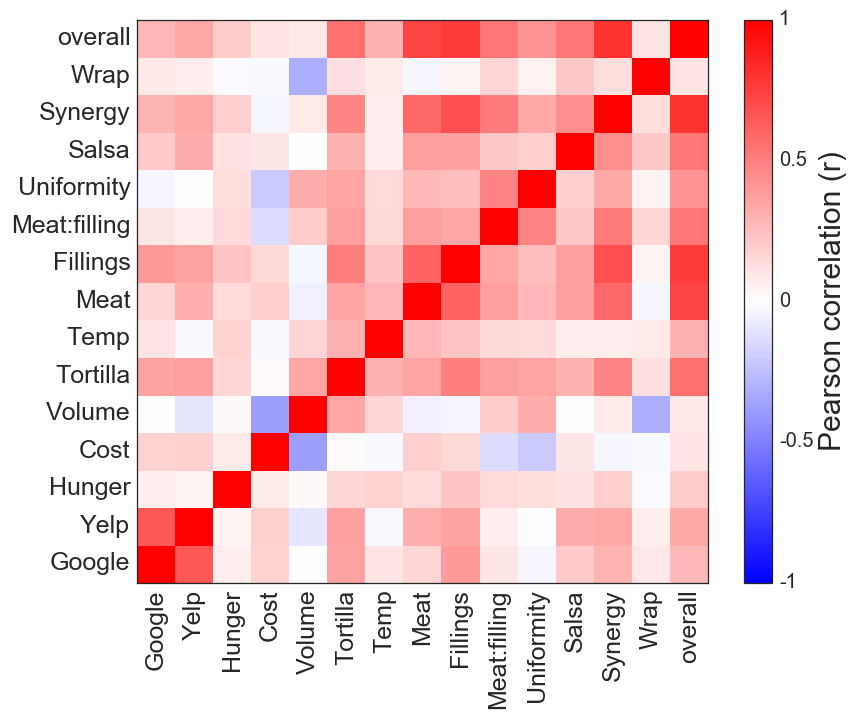 Contrary to popular belief, burritos do not merely exist in 3 dimensions. They transcend the physical limitations of space. From polling several San Diegans, we’ve established the 10 core dimensions of the San Diego burrito.

All of these measures (except for Volume) are rated on a scale from 0 to 5, 0 being terrible, and 5 being optimal. In the future, Meat:Filling and Temperature measures may stray from this subjective scale in order to better quantify these two valuable burrito characteristics. Additionally, acquisition of a portable scale will allow collection of mass. Cost (in USD) and hunger level (on the same 0-5 scale) are measured as potential control factors.

In the full article, you will find also: